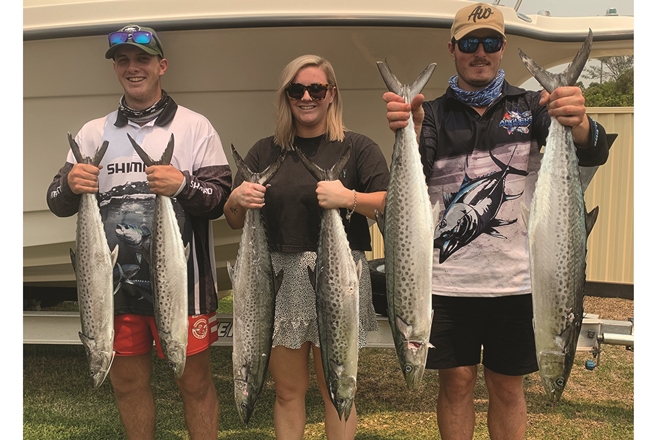 Mitch and Brandan got in on the action by holding up Tayla’s fish after a good morning out.

Gold Coast mackerel off to a good start

SUMMER is well and truly here and so are the spotted mackerel on the Gold Coast.

With a very slowly climbing water temperature, everyone was anticipating the Gold Coast mackerel turning up in November like they have in recent years. But this was mostly to do with the early arrival of warm water. In reality, while you may get the odd one or two, it’s not worth concentrating on spotted mackerel until the water temperature gets to 23C.

As the saying goes, a bad day’s fishing is better than a good day at work. However, you don’t want to waste those rostered sick days on getting no fish. Picking your times is important so far as knowing when to chase what fish.

The Gold Coast mackerel love warm water with no current, especially if whitebait and pillies are running, which draws them in. They have been readily taking baits and lures, making for exciting sessions on the water. A southerly wind is perfect for keeping the water temp up and fish in close. On the flipside, if the water is murky and the wind from the north, this knocks the water temperature off significantly and the spotties will only hang around a day or two before moving on.

It pays to take note of the conditions you’ll be fishing to give you the best chance of getting a fish or at least having a plan B up your sleeve. With the Christmas holidays in full swing, it will be mayhem on the water. Get out early and hopefully you’ll be done and home for breakfast with a few fish in the icebox.

Also on the close reefs have been good numbers of kingfish, and they’re not small fish either. Some 15kg-plus models have stretched anglers’ arms over the past few weeks. A well-presented live bait has been the undoing of many a fish, as has jigging.

Out wide, a fantastic run of blue marlin has seen boats getting several fish per session. Mixed in are some extra-oversize mahi mahi, which are welcomed by-catch. As the water temperature continues to rise, expect wahoo and black marlin to make their presence felt.

In the creeks and rivers, mangrove jack have been biting their heads off. Live baits or lures, it doesn’t seem to matter, the important thing is to fish structure. Late afternoon has been the best time for chasing them. Flatties have still been on the chew with the lower water temperature, and they are some big lizards as well. With no serious rain for months, the crabs are a bit light on but are still about. We really need a good flush to get everything moving and give the estuary mouths a good clean-out. All in all, there are plenty of options for the angler as we hit silly season.

The local bars are pretty ordinary. The bank out the back of Tweed River Bar is still only about 4m deep on the top of the tide, so it will catch any swell pushing through and requires caution. Currumbin Creek Bar remains pretty messy on anything but the top of the tide. You really have to pick your times using the bar and if you miss the tide coming back in, you could be in for a long wait. Tallebudgera Creek Bar is still narrow and shallow and should only be used in very flat conditions. The Seaway is the pick and continues to be in good shape.

I hope everyone has a great Christmas and happy New Year.

Tight lines to you all.

Heath has been fishing since the age of three and grew up fishing the mighty Georges and Hawkesbury rivers.
Previous I’m fishing for a whiting Christmas – choose local fish and seafood
Next Cracking close to the fishing year at Hinchinbrook