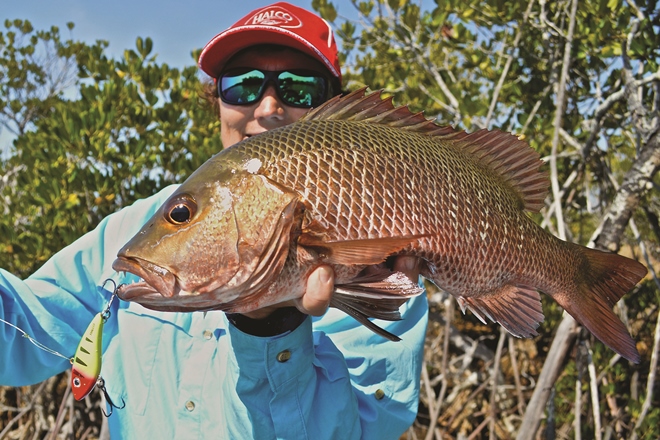 The author has been nailing solid jacks with the Halco Trembler in her favourite colour Axel.

FEBRUARY is a great time of year to go trolling for mangrove jack.

The creeks and rivers will return to normal after plenty of boat traffic and pressure over the past couple of months of school holidays. Nothing is more relaxing than cruising an estuary system trolling for mangrove jack. It is also a great way to fish when exploring new country.

Keep an eye on changing depths and take note of structures on the sounder for optimum coverage. Discovering new patches of structure will often produce good fish. Be persistent and give the areas a chance to fire. Early morning and late afternoon tide changes will give you the best results when trolling for mangrove jack.

Troll on the inside edges as close as possible to rocky outcrops and fallen tree branches. All these structures will hold mangrove jack.

The new Halco Trembler 70XS dives to 2m and has become one of my favourites for shallow trolls. It is a bibless lure with a tight action and crazy rattle. This lure in Axel colour has consistently proven its performance, catching some nice jacks. Depending on the bait the jacks are feeding on, you may need to go to a larger lure such as a Halco Laser Pro 120MT or STD. If trolling the deeper side of the estuary or river, tie on a lure with a diving rating that closely matches the depth on the sounder.

Keep your rod tip low to get maximum depth out of your lure and remain in the strike zone when trolling for mangrove jack. If one colour or style doesn’t work, change it up. The Halco Laser Pro 120DD is a top lure in these deeper situations. I like using a Samaki 10-17lb Zing Xtreme baitcaster due to its graphite blank, tremendous feel and strength down low that enables it to land serious fish.

Keeping the outfit light, I couple the rod to a low-profile Daiwa Zillion baitcaster reel spooled with 30lb Schneider braid. The braid ties neatly to 40lb Schneider Crystal Clear fluorocarbon, which is extremely abrasion resistant. You will not be afraid to put some hurt on a jack with this outfit.

A good skipper will always improve your chances of landing a jack by steering the boat away from structure, which is easily done on the troll. Over the past couple of months we have seen extremely high temperatures. Take extra care in these conditions and keep your lure trays out of the sun. The heat has warped and distorted many a valuable lure left in a tackle box exposed to the elements.

Mangrove jack would have to be one of my favourite fish to bake whole on the fire. A 38-40cm mangrove jack is a good size to feed a couple for dinner. To prepare the fish for baking, remove the gut and gills. Dwane and I also prefer to scale the fish so you only have to pick the meat from the bones and can eat the skin if you choose to. Oil the fish with sesame oil and add salt and pepper on both sides. I don’t like to use any other seasoning because this is one fish that tastes superb just the way it is. Tear off a piece of heavy aluminium foil large enough to wrap the fish in.

Place the jack in the centre of the foil and wrap it around the fish to totally cover it, using another sheet of foil if needed to cover the fish and seal the edges so no juices escape. Do this twice. Place your fish on a bed of red-hot coals and cook the fish for about 10 minutes on each side if your jack is roughly 40cm long. Pierce the fish with a fork, and if it penetrates without resistance, your fish will be ready to serve. In a few simple steps you too can be baking your next mangrove jack on the open fire.