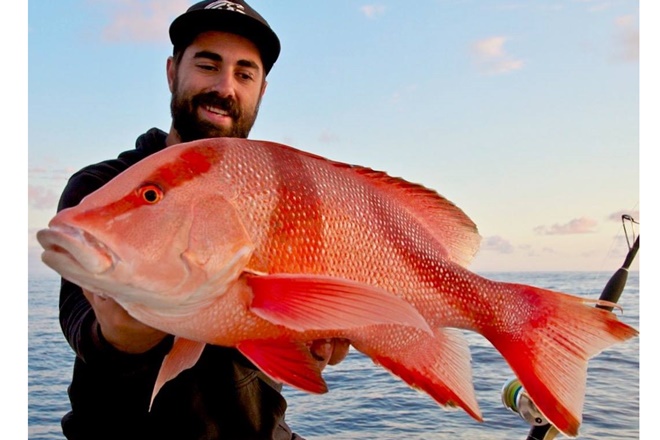 A fishing trip to remember off 1770

It’s a place where no matter who you are, what you enjoy doing, how good a fisher you are, you will love it. I’m sure anyone who has experienced a 1770 fishing trip will agree. A few weeks ago we asked some mates from all around Australia and even New Zealand to come and experience one of our trips in paradise.

Johnny Brooks, Dan Paul, Sammy Hitzke, Brodie Scibs and Daniel Vallis were the guys who put up their hands to come along. Planning trips like this is never easy, so the best thing to do is pick a rough date and work around the weather. Everyone was on call for the last-minute weather window and with one day’s notice, the boys were on their way.

There is no right and wrong way to go fishing. Simply, what works is right (within reason).

We knew we had mixed five very different fishers together for this fishing trip. I will never forget the first impression from Brooksy when I mentioned “bait” to him. We booked four nights’ stay at the 1770 caravan park as a home base for ease of launching. Our first night was about relaxing, meeting some awesome people at the park, cracking open a few beers and eating unbelievable food. The following day was when the fishing began.

Banter was in full swing, with boys talking smack and putting on ridiculous bets. The goal for most was to land a red emperor. Dan from NZ had a goal to land a red over 10kg on a plastic, and at the time we were laughing at him.

Brooksy thought he was coming GT popping, Sammy Hitzke thought he was fishing for tailor off the headland, Scibs from WA thought he was chasing samson fish in the river, spearo Dan had a goal to spear a red emperor and I only had one colour in mind: red!

The boats were filled with enough gear to fish for five years.

Our first day of the fishing trip consisted of chasing reds on the eastern side of the reef systems and some pretty cool fish came aboard. All day we were telling Dan from NZ he had no chance of landing a red on a plastic. Sure enough, he dropped down a plastic and on the first drop boated a 12kg red on 20lb gear. This was something we thought almost impossible, and boy were we proven wrong.

Over the three boats for the day we caught seven reds, 30 coral trout and a heap of other species. For our first night we chose to come in to one of the northern reefs and sleep in the lagoon. For anyone who has not gone on a fishing trip that involves hitting the Bunker Group lagoons on sunset, I highly recommend doing so!

Almost every drop results in trout, redthroat and spangled emperor, cod and I even landed a 57cm red emperor in 5m of water. We tied the three boats next to each other and cooked up a seafood pasta, which was washed down with a couple of beers. By 9pm everyone had passed out.

The following morning consisted of a lot of diving and exploring new ground. On a recent trip we had noticed Wilson Island and wanted to go and see what it was like. Prior to this trip I called Marine Parks and Wildlife Service and checked if it was all right for us to pull up and stretch our legs on the island. Marine Parks gave us the OK, so we made a quick stopover and were absolutely blown away by the serenity.

It’s amazing what this country has to offer and a lot of us take it for granted. The wildlife, the crystal-clear water, the beaches… we live in the best country in the world!

I must say to anyone reading this, if you plan on heading to Wilson Island, I advise you call Marine Parks and triple check for updates, as the island’s accommodation facilities are currently under construction. Also, Wilson is a no-go zone for fishing, but the surrounding reefs have amazing fishing to blow you away.

We spent the remainder of the day diving in the crystal-clear water around the southern reef systems of the Bunker Group for trout and crayfish, which resulted in 15 crays. The boys were stoked and we made the call to head back in to 1770 to chill out for the following two days.

A big fishing trip can be hard work trying to organise around weather windows, time frames and tides, but when it all lines up and everything goes to plan, nothing beats them. It was a pleasure to be able to fish with these boys and the memories from the trip will stay with us forever.