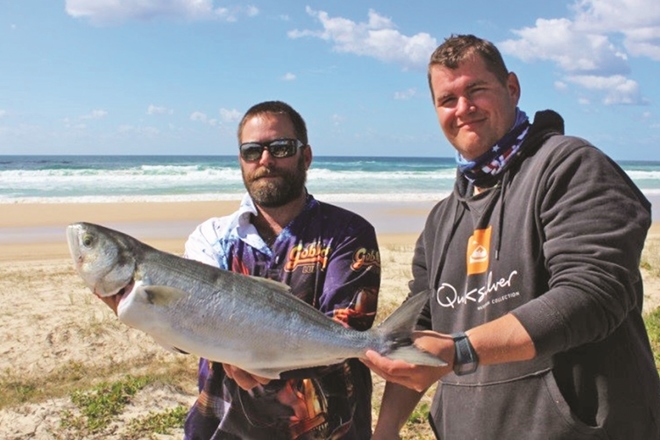 Matty Savas and Matt Boyle with a 70cm tailor.

EXCITEMENT and anticipation were high for the Redland Bay Fishing Club’s annual trip to Fraser Island.

Leaving in convoy from Rainbow Beach, we reached Inskip Point and dropped the tyre pressures to 16psi. After a short trip by barge to Fraser Island, we hit the beach and were confronted by a strong breeze. The driving was tough, with large wash-outs all the way up to camping zone six.

After setting up camp and eating the great food provided by the club, we headed over the dune to pursue the iconic tailor. Perfect Fraser gutters were forming, the tide was pushing in and it was game on!

Our tailor setups consisted of 20lb main line, 40lb fluorocarbon leader and a two-hook 4/0 snell rig baited with pillies. When the tailor were quiet, we passed the time by fishing for large dart with 8lb fluoro leader and small circle hooks. Pipis and worms were easy to find and ideal baits for the surf species. Every cast with worms produced fish and fresh pike strips on small circle hooks were almost as good.

Our location was great, camped between the Cathedrals and the Pinnacles, close to everything we needed including fuel, toilets and showers, which was a pleasant surprise. A real bonus was the equipment and food provided by Redland Bay Fishing Club. Some afternoons were challenging, with cars passing along the beach at 80km/h making it feel like the M1 at times.

On the second day, the wind picked up to 25 knots from the east, which meant it was time to bunker down or find fish elsewhere. I got chatting with Matty Savas from Fish Flickers and decided to hook across Fraser Island to the west to seek shelter. After a two-hour drive, we saw the sea again.

The excitement built, we found a sheltered oasis and after a master class from Matt we got into it with Gobblers Lures. On his second cast, my son Brandon hooked a respectable bream on a Gobblers Curl Tail. After a fun session, we headed back to camp, ready for an evening fish as the tide pushed in.

Nice gutters were forming and the tailor were on. That evening, the average tailor was about 42cm, but Matt Boyle pulled it out of the bag with a 70cm tailor. Wire traces were the go because the tailor weren’t shy.

Over the next couple of days we saw plenty of action at both sunrise and sunset on the incoming tides. Sunday morning saw the weigh-in and a 3.38kg jew and the 70cm tailor were the stars. The honours were taken by Mark Woodward with a total weight of 12.3kg from his 10-tailor club bag limit.

Thanks to Danny Salsus for organising the Redland Bay Fishing Club event and thanks to Matty Savas for introducing my son and I to a quality Australian-made product in Gobblers Lures.