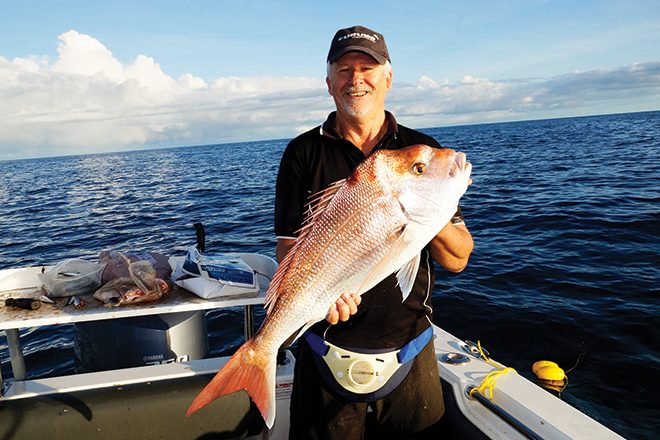 Jim with a solid snapper hooked in a light northwesterly wind.

A beautiful bounty at Turkey Beach

I’D been sitting around home admiring the broad spread of isobars on the weather map that indicated some very light wind heading our way and was keen to get offshore again.

I didn’t know it was going to result in plan B. This good weather was going to coincide with a fishing booking for a group I have had out before and everything was sorted, the boat prepped for them and ready to go. When the phone calls came through indicating they no longer had the numbers to make up the charter crew, I was actually elated because this was the opportunity to do what I wanted to do for a change and selfishly go fishing with my mates for a bit of fun.

Plan B it was called and it really only took a few calls to organise the mad-keen crew, food, house keys, special bait and so on. Soon we were on our way to Turkey Beach for an overnighter out on the reef. We got some ice and a few supplies from the local shop and took notice when the proprietor said the fishing had been quiet.

Yeah, daytime in the lead-up to the full moon can be like that, but we took it with a grain of salt because we hadn’t been here for a while and were itching to get out and explore new areas. Almost out through the estuary before first light, we had decided to head northeast for the shallows because we had done well there on our way home last trip and were keen to lay a good foundation early on as we are always the optimists and believe in making our own luck.

George Baumber got straight onto a nice coral trout to christen a new 6’6” Wilson Venom PE2-5 spin stick and I settled for some average redthroat emperor on a small running sinker rig. George did what George often does and immediately landed a bigger trout on the next drift. I would call it the biggest coral trout we have so far landed up there.

We were laying a nice foundation of fish in the box as our other crew member Jim Carlson from Trymax Marine Electronics was going ballistic right from the first drop on large redthroat and several good parrot. His 15-24kg Live Fibre rod seemed to be bent over every time I looked around and thank goodness these guys were on fire because their skipper was going a tad slowly at that stage.

Jim liked the way the mid-frequency Garmin CHIRP sounder was tuned and was impressed with the bottom discrimination on the flat hard seabed away from the main peaks, as that was where he consistently got the bigger parrot. As luck would have it, on the next drift Jim almost had a trout in the boat when the taxman decided to bite off his share just as he was about to lift the trout from the water.
Bugger, two big trout to George and one trout head to Jim.

It turned out to be the only time we were sharked all trip and interestingly enough, the one undersized redthroat we caught on those early drifts was the only small redthroat of the whole trip. Feeling pretty cocky, we headed out deeper to some of our favourite haunts and the rot set in. There was not much fish life on the sounder at all and we struggled to lose baits.

After moving about a lot, it was a common story of slow fishing and not much fish life anywhere. The woman at the shop was right. We did the XL redthroat spots, the big maori cod spots, the snapper ledges and holes as well as the goldband and pearl perch grounds. Not much joy, except for the odd parrot and hussar, but it was good being out on a glassy sea.

Rather than take the easy option of going back to the shallows, we pushed a little further north and decided to stick to the plan and anchor for the night in the deeper waters and see what happened on the top of the tide a few hours after dark. After transferring some fuel, tallying up the fish and cooking up fresh fish for dinner, it was a game of patience waiting for the tide to slow.

The sign of things to come was a couple of good redthroat at around 9pm, then George brought up a bloody big cod on the trusty broomstick and the 925 Alvey loaded with braid. Yep, it took a bit of drag but was essentially a straight wind on that outfit. At 120cm or so it was a big fat bugger and oversized, so it had to go back.

It was swum until it kicked away and then it was the pearl perch hitting baits followed by a wave of redthroat under the boat. One of Jim’s redthroat was an unusually light colour, almost white and something we don’t often see. A nice snapper to Jim was a bit more variety and the icebox was looking great.

He pulled a 62cm pearl perch and was really excited but was immediately outdone by ‘King’ on the next drop who landed a 64cm pearlie.  Jeez they were quality fish and it really didn’t matter who had the biggest, but George has a well-known habit of doing that. It was my turn to get something large and an 83cm red emperor with a whopping girth hit the deck.

We were all pumped, got some quick photos and jumped back into the hot bite while it lasted. That was about one and a half hours in total and once the tide started to run again the fish shut down. We had time to reflect on that good hot bite that coincided with the top of the tide and where the moon was in the sky and full.

It was about putting together a combination of factors that have worked well for us over many years of night trips and making sure we were on that part of the reef where the fish would likely come through. After a good snooze, it was time for brekky and a hot cuppa just before daylight and then the reef pick was pulled so we could drift the ground we had anchored on all night.

Some big pearlies, redthroat and nice snapper were the order of the morning, but the fishing slowed as a light northwesterly wind started to spring up. A line of dense low storm cloud was getting closer and as it did we chose to head a bit south because of a prediction for a moderate southerly change sometime that day.

We weren’t concerned about the long run home in a southerly because the boat handles those conditions easily, but wanted to be where we could run to shelter if necessary. As luck would have it, a few kilometres down the road we ran over an interesting line of reef on the sounder and decided to stop and sound around.

The wind had now gone to the west and we got a dozen drops of rain on us, then suddenly the fish went ballistic. It was nothing to do with a tide change, just a weather change that became a fish bite trigger. Some nice maori cod, large redthroat and excellent pearlies were the mainstay of this session.

They kept biting, so we headed inshore to check some shallow ground on the electronic chart where we had never fished previously because we had a big bag of pearlies and found it was useful ground to top up on some other species. We aren’t the type who need a couple of nights to take home as much fish as we lawfully can, heading home around lunch content with a great feed of reef fish.

That southerly did get up before we left and we had to take it steady on autopilot for about the first 20km slightly off the nose to the wind.  Gradually as the breeze dropped right out and our average speed increased we were cruising on a glassy sea, filleting what we lawfully could and had even scrubbed the boat down by the time we were in the estuary.

Another good trip to Turkey Beach, and I reckon it was the best plan B ever. It was Jim’s first trip to that area with us and though it was slow fishing at times, he thought the variety of species and quality of fish was really first class. George and I did too and are merrily chewing through our bags of fillets and will happily force ourselves to do it again on the next plan B.

Bill has been spearfishing, fishing and surfing for all his adult life and now runs a business specialising in teaching people how to cross coastal bars and fish offshore. He also runs charters for people who fish for the right reasons and whose company Bill thinks he will enjoy. He’s been running his bar crossing business successfully since 1996 and hopes to continue doing so for years to come as he grows old disgracefully.
Previous Australian Marine Centre brings Aussie brands
Next Terrific Turkey Beach a flat-out favourite