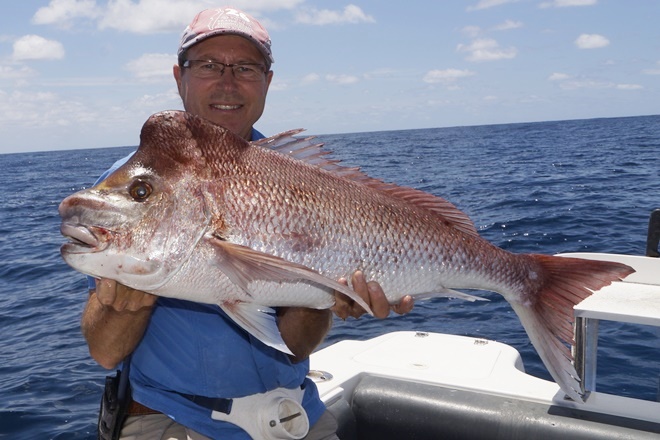 Big boppers like this are becoming harder to find.

SNAPPER is one of those iconic species that’s on everyone’s wish list and the winter months through to late spring present the best time to be catching snapper on the offshore reefs of southeast Queensland.

Tagging studies conducted over time indicate snapper populations in Moreton Bay tend to mostly stay in the bay and recaptures in most cases are close to the original point of capture and tagging. When it comes to the offshore snapper population, it is an entirely different story. We know they build up in numbers off southeast Queensland for the spawning season and as water temperatures drop in late autumn and early winter they generally become widespread over our reefs.

Where they go to in the warmer months is a good question, with some evidence of migration southward to cooler waters but this does not account for the bulk of the population. It is a fact that many of the larger fish tend to hang around our local reefs all year and these ‘resident’ fish turn up in catches often well out of season.

Over the years I’ve been lucky enough to catch snapper from Reid Island off Mackay in spring to northern NSW in winter, where they are sought by commercial fishers using fish traps, and have had the pleasure of catching snapper of cracking size in New Zealand during the warmer months when they are most prevalent in that southern climate. Scientists acknowledge New Zealand has the ideal growing conditions for the species and a 10kg New Zealand snapper is not regarded as anything too special, but here, that size is pretty much up there as the Holy Grail.

Of interest to me in particular is the number of good-quality snapper we have caught on the deeper and more isolated reefs of the Capricorn Bunker Group off Gladstone on a year-round basis, yet we don’t catch snapper of that same high standard consistently at home, presumably because of over-fishing. Clearly snapper is a species that requires management and only a selfish fisher would be in denial on this topic, which is best kept for another forum.

As of August 2018, in Queensland there is a per person bag limit of four fish in possession, with a minimum size of 35cm and a maximum of one fish over 70cm. In Queensland the fish are measured as total length with the mouth closed. At 35cm the fish have reached sexual maturity and should have spawned twice and in many cases three times. They are slow growing, hence the limit of one fish per person over 70cm.

So, catching snapper is not difficult and they are easy enough to find. Anyone can catch one on the reefs that are most frequented, for example on the Sunshine Coast, the Barwon Banks, the Hards further north, Murphys Reef and Caloundra 12 Mile. Moving south – the deeper wrecks northeast of Cape Moreton and along Moreton including Deep Tempest, Square Patch on the 42-fathom line, especially at night on the full moon, Shallow Tempest at night, the 33-fathom reefs and down along the Cathedrals through to the 36-fathom and 50-fathom line all the way through to the NSW border.

If wanting to be catching snapper of a larger size consistently, then you need to know a little about their feeding habits and think a bit out of the square. Tide, moon phase and barometer all play a part in catching snapper consistently. From the top of the tide through ’til a couple of hours after until the moon is in the highest part of the sky or the minor peak when the moon is approaching the centre under the earth are also good periods for snapper. First light and sunset are also very effective times for catching snapper.

There are some close inshore reefy locations where you can almost set the clock in winter for them to come through. Just sitting on the anchor in the lead-up to the full moon with that period from after sunset until the last bit of daylight disappears becomes the most productive as the fish come in from deeper and are less timid. Other diehards will be anchored in their favourite location well before first light and will be on their way home by mid-morning.

Higher rather than lower barometric pressure can only enhance the chances of catching snapper, and if the barometer is lowish, I tend to focus on the deeper reefs as the snapper seem less affected on those occasions. If fishing during the day is your thing, it is worth fishing any of the reefs that don’t see much boat activity, and in particular somewhere other boats aren’t working, as the fish can be easily spooked by excess engine noise. On the shallow reefs during the day, the fish seem less inhibited when it is heavily overcast and a bit of stealth on these occasions pays off.

Why not go to the next step if you know the precise location of a favourite piece of snapper-holding structure and set up a drift with engine, pumps and sounder turned off well in advance and just float a live bait or large dead bait down to the fish without spooking them. You’ll know by the GPS how close you are to the target, and if you fail the first time, refine the drift and have another crack. Little things like driving around and not over the structure and float lining bait slowly through the lower quarter of the water column, making it swim not spin, rather than anchoring it to the bottom with a monster big sinker, will definitely enhance the chances of hooking that trophy fish you’ve been chasing.

We’ve found over time on the local offshore scene that the trophy fish are more frequently found in shallower reef and rubble areas than out on the deepest reefs and that is where the floated offering with as small a running sinker as you can run to get down to where the fish are will pay off. Dead baits such as long mullet strips or pilchards are effective, but sometimes more effective is a live slimy mackerel or yakka, especially if there are big bait schools in the vicinity. A snapper typically crashes baits behind the head, so a livie pinned with a two-hook gang is effective. The lead hook through the gristly snout allows the livie to swim naturally, with the sting of the second hook parked in the livie behind the head where it is needed.

The initial hook-up in free spool is exciting and you’ll know you’re on to something good when the fish starts that powerful big bumpy head-shaking run. I like to ease the drag back just a tad and let the fish burn off some energy in the initial run, rather than putting too much power into turning the fish’s head and getting it moving towards the boat too soon. It isn’t likely that the fish will rub the gear out in the rocky or craggy bottom if hooked well up off the seafloor in free spool, so it can be played out to an extent. Keep in mind, they tend to run out of fight quickly, so you can enjoy catching snapper with lighter gear or if fishing heavy just hook up and get cranking.

In the shallows, something from 30lb braid upwards will do, with 4m of leader joined with an albright or double uni knot and a running sinker to a two-hook gang for a livie or three-hook gang for a dead bait a pretty good rig. Soft plastics also work well in the shallows, and a technique along the lines of float lining works well, except the fish is being tempted with a jig head and piece of plastic shaped and rigged to be enticing. When jigging soft plastics, keep in mind more fish will be taken on the drop back than at any other time.

Likewise large metal jigs, especially the flutter type, work well on snapper in deep water and it is the drop back where they are most potent. On the deeper reefs there seems to be a lot more fish, and floated baits with a larger sinker to get down to where the fish are will certainly account for the bigger fish. The deeper reefs with a sharp drop-off on the eastern side are an excellent starting place to locate snapper by float lining or using plastics during the day, but try putting something luminous into the rig in the deep to more easily attract the fish in the darker environment at depth.

On the flatter, deeper reefs where there is very little change in the profile of the reef, a paternoster will also account for big snapper, despite what some people will tell you. Double hook-ups are not uncommon in this scenario and there is also the likely bonus of a big pearl perch as well as a snapper.

So the generally accepted rule of thumb for catching snapper in daytime is to float line the steep pinnacles and reef drop-offs and at night focus on keeping the bait on the bottom along the line of the reeftop.

Having said that, I hope you get something out of this article and it inspires you to try something different to catch a snapper and dare to think outside the square for more success.

Bill has been spearfishing, fishing and surfing for all his adult life and now runs a business specialising in teaching people how to cross coastal bars and fish offshore. He also runs charters for people who fish for the right reasons and whose company Bill thinks he will enjoy. He’s been running his bar crossing business successfully since 1996 and hopes to continue doing so for years to come as he grows old disgracefully.
Previous Materials are not materials when it comes to boat insurance
Next Much-needed rain makes it a great time to fish Gold Coast