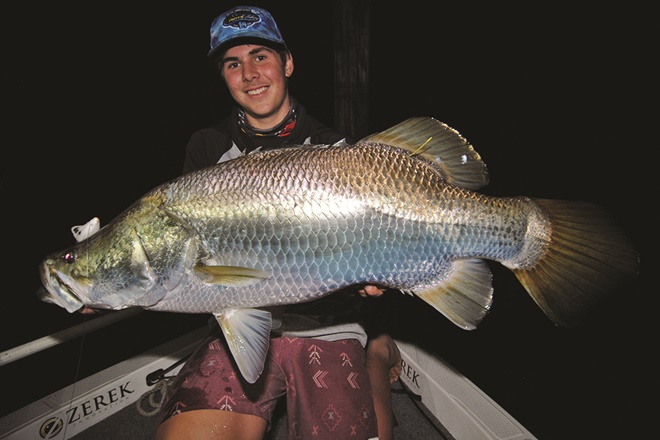 Mitch Reed with a sensational barra caught at Teemburra Dam. 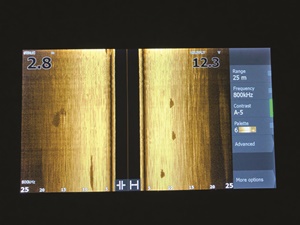 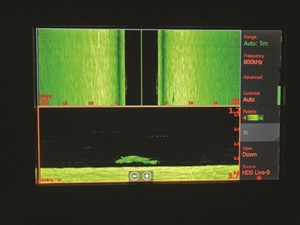 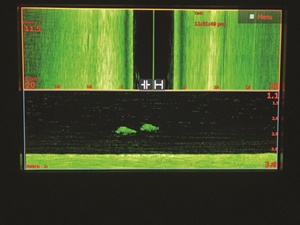 I MANAGED a trip north late in 2018 to fish the Zerek ABT Barra Tour with mate Lachie Reed at Peter Faust, Teemburra and Kinchant dams.

This year’s Barra Tour was certainly a tough event for us, with our pre-fishing hot and cold on all three dams.

We spent the time sounding around finding structure, and the Lowrance HDS-9 Live certainly made it easier to find fish. This is an upgrade on my previous units, with the screen displaying structure much more clearly.

If no fish are on the screen, you won’t catch anything, and in the end it’s not worth casting, which is something we saw time and time again. We anchored during the competition and with transducers situated both at the front and rear of the boat, were able to watch barramundi passing through.

In these situations you could almost guarantee these were active fish and a cast was always made in the approximate area of where we thought the fish would be, and seven out of 10 times we’d end up catching the fish.

Lachie and I used lures from the Zerek range, comprising the 5” and 7” Flat Shads as well as Fish Traps in 95mm, 110mm and 160mm. We had some moments of absolute bedlam and great fishing, with the highlight being a session in Peter Faust Dam where we landed a 90, 93, 94, 97 and metrey in reasonably quick succession on Fish Traps and the 5.5” Live Mullet.

Another highlight was hooking up to a good-sized fish but being unable to play said fish to the boat due to technical difficulties where the handle of the reel caught in the sleeve of the raincoat I was wearing.

The comical run of errors continued as I then started laughing so hard I couldn’t wind the reel at all, the rod was in the water up to the reel and the fish was jumping on the other side of the boat. Somehow, Lachie still managed to net the fish and I was pretty stoked to see the 105cm barra on the deck.

It’s funny how you manage to land fish like that in the pre-fish but come competition time, it always seems to be a different story. Lachie also hooked a quality barra around the metre mark about 20m from the boat. It came straight out of the water, tail walked all the way to the boat, hit the boat and then proceeded to wrap itself around the transducer pole to end up popping the leader.

We fished as Team Mustad during the Barra Tour and struggled, even though we had a reasonably good pre-fish, but just couldn’t replicate our efforts when it mattered. We tweaked our lures and changed our retrieves but just couldn’t quite find the pattern that was getting fish into the boat.

The newly released lighter weight of the Fish Trap 160mm (58g) allows this big lure to be worked with more finesse which gives the angler a wide variety of retrieves to work with.

In the end a slow lift and draw of the rod seemed to work best, though other retrieves such as a slow roll and sink and hop retrieve can be used when the fish are more active.

What we found while fishing this competition, particularly the Peter Faust rounds, was information about the fishing was freely shared between competitors (or perhaps it was just we weren’t perceived as a threat!).

Staying in dongas at Camp Kanga, which is in close proximity to Faust, was an absolute blast, with food provided and a great social atmosphere between teams.

A big congratulations must go to Phil and Geoff (The Likely Lads) for winning three of the four rounds of the Barra Tour and taking out Team of the Year.