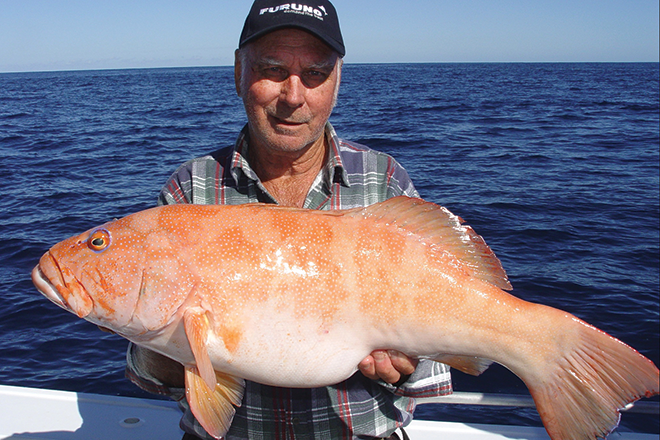 Terry Lamprecht and a beautiful coral trout hooked at the northern end of the Capricorn and Bunker Group reef system.

A year of wicked fishing adventures

IT’S been a while between fishing trip articles due to work and family commitments, which has left minimal time for much else. I’m sure many of you know the feeling.

Fortunately for me, I’ve been able to fit a few wicked fishing trips between the busy times. I had another fantastic year of fishing that has produced awesome fish and great memories. As we head into the new year, I thought this would be a great opportunity to recap 2017 and share some of my experiences with readers.

Wreck Reefs
I was lucky enough to be invited on the trip of a lifetime to the Wreck Reefs, located 450km off the Queensland coastline in the Coral Sea. Tackle company Wilson Fishing organised the trip on Big Cat Reality Fishing Charters, which saw us leave Bundaberg heading in a northeasterly direction just after dark.

Conditions were moderate and many on board got seasick, which made for a long journey considering it took a whopping 36 hours to arrive at our destination. The Wreck Reefs are made up of several coral atolls that rise out of the ocean floor from thousands of metres of water.

Some of these atolls have small sand islands on them that are inhabited by thousands of seabirds, which is quite a sight. On day one of fishing we were greeted by calm seas, clear water and what can only be described as paradise.

We spent the first morning casting poppers and stickbaits around the reef edges for red bass and bluefin trevally before trolling Zerek hard-body and stickbait lures for a crazy session on massive wahoo up to 40kg.

With the session slowing, we found ourselves jigging deeper reefs in 40-80m of water for big coral and coronation trout. Day two started well with a GT and some green jobfish on the troll before we decided to have a quick jig on a good pinnacle in 40m of water.

I opted to slowly work a large Zerek Flat Shad plastic on a 3oz jig head, which soon got smashed by the GT of the trip, putting up a great battle on 80lb tackle and a Wilson Venom 450g PE5-10 jigging rod. Later that day we decided to cast poppers and stickbaits inside the shallow reefs around Bird Island, which is the largest sand island of the Wreck Reefs.

This accounted for big red bass and coral trout along with the great memory of a huge coral trout following my popper all the way to the boat in less than a metre of water. The trout sat boatside, eyeballing us while I frantically swished the popper in front of it hoping for a take, but it soon turned away and swam off.

It was frustrating, but sometimes it’s more about the moment and experience than catching the fish. Over the following few days the wind increased to 20-25 knots, making it difficult to fish from the smaller boats away from the reef edges but it didn’t stop most fishos and we soon found ground holding dogtooth tuna.

The majority of boats were hooking them in various sizes but Shane took the honours with a monster doggy taken on a trolled dead bait while the rest were caught on Zerek hard-body and stickbait lures. Big wahoo, green jobfish, sailfish and barracuda were in the mix too and I landed my personal-best yellowfin tuna.

While the bad weather made it hard to fish at times, we also spent some time exploring a few of the sand islands, which was interesting and added to the adventure. James and his crew on Big Cat Reality Fishing Charters run a sensational operation and go above and beyond to ensure everyone has an awesome and safe trip. I must thank Wilson Fishing for the opportunity of a lifetime.

Brisbane – Moreton Bay and offshore
When the weather or time doesn’t allow for big trips up along the coastline, I love nothing more than taking my smaller boat out in Moreton Bay. I’ve spent a considerable amount of time in the bay over the past few years searching for wrecks and natural structure with great results.

Although finding wrecks is like finding a needle in a haystack, spending 10-hour days just sounding hugely increases your chances. While some say I’m crazy for having the patience to do it, I find it massively rewarding when I do find something.

So far the hard work and patience has rewarded me with over 15 wrecks along with plenty of natural structure. Though I don’t fish these spots often for fear of losing them to spot thieves, occasionally I will take the kids for a quick fish or spend time dropping my underwater cameras on them to see what the wreck/structure is and what’s living on it.

My daughter caught one a few months back that interestingly had no tail. It was quickly released to fight another day but it’s great to see a fish with such a disability managing to survive and grow.

Funnily enough, that same fish was caught recently in the same area by fellow writer Sean Conlon from Moreton Bay Fishing Charters and once again released. Another species that has been good fun targeting in the bay is blackspot tuskfish.

These hard-fighting fish inhabit structure in the main channels and around the bay islands, which makes them difficult to target because they run for structure within a split second of being hooked.

You need to target these fish with crabs and in most cases heavy tackle is required to have even the slightest chance of landing one. Though I’m yet to land one in double-figure weight, I’ve had a blast catching them, particularly with the kids in shallow water around the bay islands and channels.

Offshore from Brisbane has also produced some nice fish including bar cod and eastern nannygai in 200-300m of water and quality pearlies in 100-150m of water. I’ve had some of these pearlies aged by Fisheries Queensland, and a 64cm, 4kg fish was found to be about eight years old.

We’ve also put in some late afternoon/night sessions around the group off Point Lookout on North Stradbroke Island, which have produced great snapper along with cod, pearlies and a surprising 70cm red emperor.

Like anywhere, fishing smaller isolated spots that see less fishing pressure has been key to catching quality fish, and using techniques to suit the habitat of each species greatly increases catch rates. 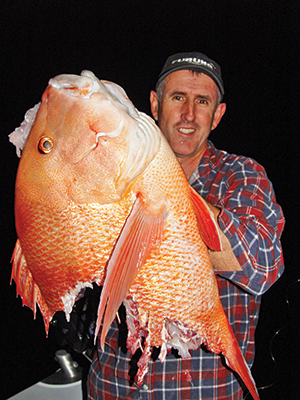 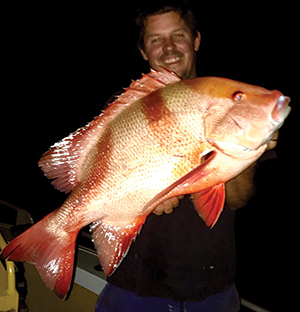 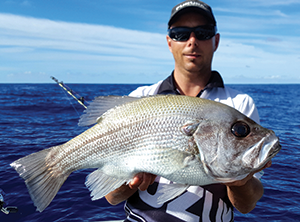 It wasn’t long before I started finding large pinnacles that produced a good mixed bag of coral trout, maori cod, red emperor, spanish mackerel, goldband jobfish and redthroat emperor. As the day progressed, I continued searching and kept finding massive pinnacles that produced some nice fish but overall the fishing was pretty slow and the ground I was finding was not ideal red emperor country.

I spent most of the day in this area before making my way south and searching hard for new ground. Later that afternoon I ended up where I’d caught quality fish before and dropped some baits just as the sun was going down.

A couple of fish came over the side but once again the fishing was fairly slow, so I spent a few more hours sounding for new ground for little reward and called it a night. The next morning, we spent some time on the 100m line looking for pearlies and it wasn’t long before the Furuno FCV-295 lit up with a great show of fish.

On the first drop we had six pearlies and a red emperor come over the side, which was a great start. This continued for several drifts and soon we had our bag limit of pearlies, so moved on. That afternoon we captured cracking trout east of Sykes Reef before heading home just on dark.

Fraser Island offshore
We’ve had great trips wide of Fraser Island and Rainbow Beach over the past year, and while the reds didn’t come as easily as the previous year, we managed to persist and get solid results. On one trip we were doing it pretty tough and instead of driving away from one area to another just before dark, I thought I would wait because it was coming up to the peak bite period.

Minimal current was flowing and I thought the reds may be ‘grazing’ on flats well away from the reefs during the daylight hours before moving back onto the rock on dark. I hung close to one spot for half an hour or so and just as the sun disappeared I sounded over the top of it and to my delight it lit up like a Christmas tree with a great show of reds.

On the first drop we all got smashed and finally after half a day of searching we could smile as 10-13kg reds made their way over the side in a wicked fishing session. Each drift resulted in a three-way hook-up on big reds but unfortunately on one drift we ended up getting in a massive tangle with each other.

We landed two fish but the tangle stopped Foxy winding any further, so I quickly cut our rigs in an effort to free up his line when all of a sudden his fish pulled hard for a few seconds and then went limp. After freeing his line, he wound in the head of a 15kg-plus red emperor that had been eaten by a shark.

With the presence of a shark and happy with 11 reds, I decided to leave the school alone and go sounding for a few hours in new locations. The next morning we tried an area I hadn’t fished for a few years. The fishing was slow and on the last drift before moving on I got smashed by a horse fish that pulled plenty of drag.

All I could think was ‘please don’t get sharked’ and it wasn’t long before we had colour under the boat and then a 15kg red on the surface. We’ve been lucky to catch lots of big reds over the past 15 to 20 years but when they get to about 14kg-plus they really are special fish and sometimes I think we take it for granted just how awesome they are.

We moved on and went to another spot where we had caught a 16.4kg red about 10 years ago. A couple of good fish were showing on it, so we dropped down big hussar fillets and both the old man and I got smashed by two very big fish.

They had powerful runs and we would gain some and lose plenty, so I was thinking they were both 15kg-plus reds when suddenly we both got sharked in a matter of 10 seconds of each other. Talk about gutted, but that’s fishing.

Not knowing how big they could have been keeps us going back for more.
Happy New Year and until next time, tight lines.