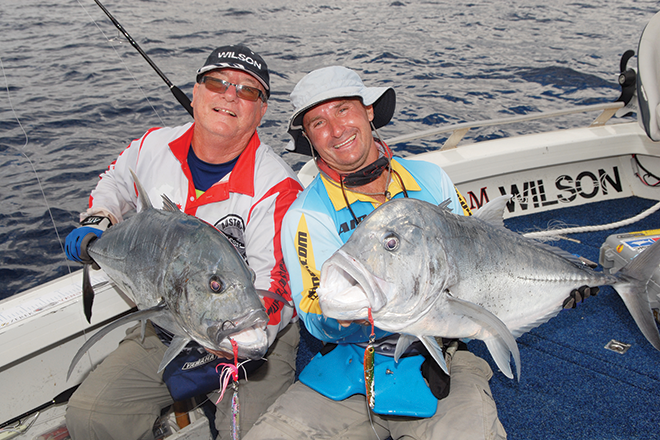 Graeme Wilson and the author with a pair of GTs.

Without a doubt, now is the time to be in the Jumpinpin area chasing the large number of flathead in what is shaping up to be another excellent flathead season.

Unfortunately (ha ha), I was pulled from this enormously productive fishery to head offshore and fish in another place that would blow most anglers away with the sheer size and stubbornness of the local piscatorial inhabitants. Brisbane-based tackle company Wilson Fishing had organised a research and development trip to the Wreck Reefs and Cato Reef with well-known and respected Big Cat Reality Fishing Charters, and of course, it was a trip that any keen angler would be mad to knock back.

The Wreck Reefs are located in the Coral Sea about 450km east nor’ east of Gladstone. Being such a remote location, it was necessary to pack a large array of tackle and it took several hours to load the dozens of rods, reels, boxes of lures and other tackle required onto our mother ship. The Wilson 6m plate alloy boat was also loaded onto the mother ship alongside the ship’s 4.2m tenders that would be used over the course of our time on the reef.

The forecast for the trip was a mixture of glamorous days and days that would test even the most hardened seamen. Yes, it was rough, with swells coming into the Burnett River (Bundaberg) on our departure and the ordinary conditions lasting for the 36 hours of steaming to the reef, but as I would find, the Wreck/Cato experience would definitely make the trip worthwhile.

On the voyage out, gear was prepared, knots fastidiously tied in anticipation of the demons of the deep and of course the crew looked after us superbly with plenty of food and assistance where required. Once at the reef we had loads of options available from trolling the deep to jigging and going land based on Bird Islet to cast poppers for big GTs.

The reefs were pristine, with crystal-clear water in the shallows morphing into the magical dark blue/purple of the deep. The area certainly had that ‘fishy’ look about it. If you have a look at a nautical chart for this area, it will certainly blow your mind. Being right on the continental shelf, the Wreck Reefs are basically mountains rising out of very deep water.

Trolling for dogtooth tuna took place in 35-70m of water, with the Zerek Pelagic Z minnows (size 180mm, colour 07 a standout) and Zappelin stickbaits (colour PFU the standout) deployed for action. With the Pelagic Zs diving to about 3m and the Zappelin stickbaits working their magic on the surface, it wasn’t long before we met the opposition, and it was tough!

Doggies would come up and take the lures, swim halfway to the bottom and after we believed we had turned their heads on a locked drag we felt we had the game won. Of course, everything is big and mean out here and the doggies had other ideas, often swimming straight back down to the reef to bust us off.

The biggest of the trip weighed an impressive 45kg while most others averaged 15-20kg. While trolling, my boat-mate David Green connected to a sailfish, which performed stunningly prior to capture. Another two bites on sails followed but as is often the case with hard-bodied lures and sails, they didn’t stay connected for long.

Shortly after our flurry of sails, Troy Dixon in the Wilson boat landed a black marlin of about 200kg. We used the Venom popper rods for trolling the Zappelin stickbaits way out the back in the middle of our spread of lures. We also trolled two Pelagic Z lures in closer with the shorter Venom jigging rods.

Micro jigging with smaller Zerek Step Slider jigs fitted with Mustad light jigging assist rig hooks in 30-40m of water enabled us to catch all sorts of crazy creatures, but the mortality rate on the lures was incredibly high. Traditional jigging in 70m of water saw captures of dogtooth tuna, GTs and jobfish just to name a few.

It was interesting to use the specialised Venom jigging rods for the first time on truly mean fish and they certainly are incredible fishing tools. My favoured jig rod was the Venom Deep Jig Spin 350g, which had the guts to pull out some of the bruisers on the reef.

We were also able to fish on Bird Islet where the land-based GT fishing with stickbaits and poppers was awesome. My preferred rod for casting was the Venom Popper PE8, which can put a cast into the next postcode. Bird Islet is full of booby birds, terns, eggs and their young, along with massive orange hermit crabs, and it was quite interesting to walk this little island that is full of history.

This reef system has claimed several ships, notably the Porpoise and Cato back in 1803, both of which struck the then-uncharted and since aptly named Wreck Reefs. As our trip progressed, the unfriendly waters and wind petered out to very welcoming dead-calm seas, with the conditions leading to more productive sessions on big fish.

At night, if anglers weren’t worn out from the daytime sessions on big fish, it was also possible to fish from the 25m mother ship Big Cat Reality for the spectacular reef fish on hand. I berleyed up using tuna flesh for highfin amberjack, red bass and green jobfish.

If we’d concentrated on bottom fishing during the trip the results would no doubt have been amazing, with the shows of fish on the sounders incredible. Though sharks may have proven a menace. Some of the boys got really great footage of sharks following fish up and you really can’t comprehend how many sharks are down there. 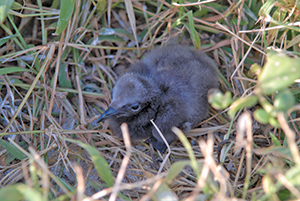 It is possibly one of the slickest charters I’ve had the pleasure of fishing with. To check out the amazing itineraries in incredibly fishy waters, visit www.bigcatreality.com

Footage from the trip will be aired on Hook, Line and Sinker in coming months. A big thankyou to both the crew at Wilson and on board Big Cat Reality for a trip I will remember, and brag about, for a very long time.