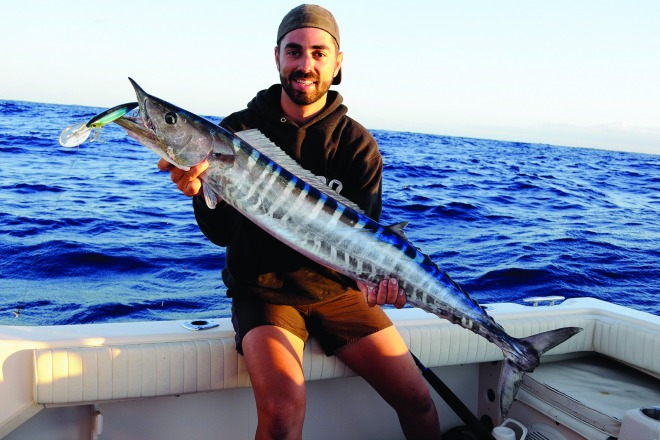 IT has been an incredible wahoo season, with wahoo being caught right up and down the coast on almost anything.

Although these have not been terribly big fish, they have been schooling and make for great fun on light gear. Earlier in the season we targeted areas such as the Barwon Banks off Mooloolaba, and then as the season progressed we followed the fish south towards Cape Moreton. Lately we’ve heard of people catching them all the way down at Coffs Harbour.

I’m not sure whether this long run south has something to do with the water temperature being warmer. Wahoo are very similar to spanish mackerel, except in years past they have been rarer than the mackerel. However, this season has truly been something else.

I recently heard of a guy landing his first-ever wahoo off the Gold Coast while chasing snapper on a paternoster rig! Now that says something. Anglers target wahoo in a number of ways. If a reef structure is large and goes for kilometres, we drop in hex-head lures and troll at 12 knots to cover more ground. If the reef is small and doesn’t cover much ground, we hit it with hard-body lures.

The hard-body lures we have found to work exceptionally well are the ELKAT 120mm Striker Deep Divers in Pillie colour. These swim incredibly well and will be smashed if any wahoo are present. When trolling hard-bodies, the most effective method is to troll three lures at six to seven knots. Run a short corner, long corner and shotgun.

These trolling terms pretty much explain themselves, and on the short corner and long corner we run ELKAT 120mm Strikers and in the shotgun position (the centre rod) we troll a Qantas-coloured shallow diver about 50m back from the boat. The idea is the white body and red head of the shallow-running lure symbolises an injured baitfish floundering near the surface behind the wake of the boat.

This three-rod setup has been doing the trick for us this season and is quite easy to manage, even when fishing alone. When trolling, a lot of people tend to put the brakes on when a fish strikes, which can cause a lot of missed opportunities. Once a fish strikes we accelerate to 10 knots for about five seconds to ensure the fish is well hooked.

When we are confident the fish is hooked, we reel in the other lures and leave the one with the fish on until last. After we get the lures in, we like to keep the fish on our right-hand side because we have found it is easier to keep in control of the fish that way.

Wahoo tend to have two runs in them. During the initial run the fish is likely to strip 100m of line in seconds. The second big run occurs as soon as the wahoo sees the vessel.

It is important to let them do their thing and not have the drag set too tight. Wahoo are a surface fish so are unlikely to wrap you around the reef.

They have been so thick off the coast that we have also been catching them on metal slugs around Hutchinsons Shoal off Moreton Island. The key to landing wahoo is to be patient, keep constant tension on the line and let the fish run if it wants to.