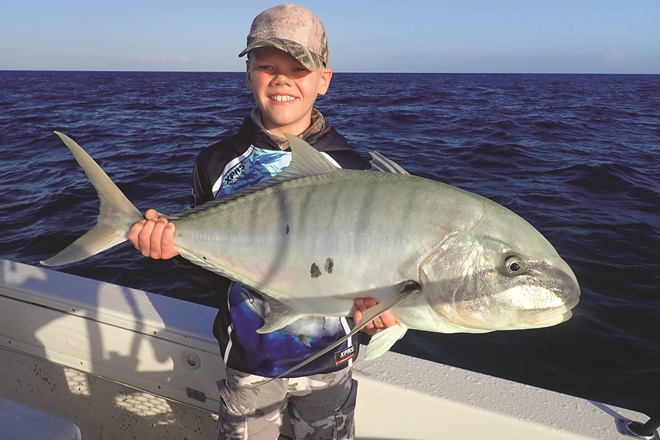 THE wind continues, but it has settled a bit.

With the prevailing wind coming from the east, we’ve beem able to get out and catch fish. Plenty of bait has moved in closer to the shores of Fraser Island and it’s not too small, predominantly being white anchovies and blue pilchards. The dominant successful lures have been soft plastics and metal slugs. Hopefully the weather continues to calm as the climate cools. With the good amount of bait, surface feeders are not hard to find.

Spotted mackerel were still around in February but definitely thinning and making way for massive schools of mack tuna and smaller schools of longtail tuna. Both species are a heap of fun if you can trigger strikes. As usual, you need to stay vigilant for sharks prowling and awaiting an easy feed. Often when a proper bait ball has formed, one that stays in a ball for a large amount of time where all predators are focused on the bait, the sharks too will hoe into it because they don’t need to be agile like they need to be when chasing down a spotty or tuna.

The small baitfish are easily digested and the little energy required to catch them means the taxman may actually leave you (and the fish you’re chasing) alone. Predators are smart enough to instinctively understand their own energy demands. Chasing a tuna burns more energy than bucket-mouthing a dense bait ball that smaller predators have rounded up. Among these tight bait balls you will often see other predators. They can be literally anything!

It could be a pack of GTs, or more commonly around here golden trevally, cobia, queenfish or XL tuna. You might see them feeding near the surface, or perhaps using your electronics you’ll see them down a bit deeper. It always pays to be aware of the circumstances. Just keep in mind, once the bait gets low, the old taxman might still have a void in its belly to fill. Queenfish have also been about. We should see more of them as it cools.

Like trevally, they can show up in massive schools on the reefs. I must say, it’s been a few years since I have seen schools of larger queenies. I have seen smaller ones in the 50-90cm bracket and often you will actually see them swimming on the surface.

People often mention I have great eyes when I pick out birds and fish but in fact I have very poor eyesight. Tuna are often found in seething, frothing schools. These are easy to spot and will usually be seen accompanied by birds. So how do I see the birds and the fish? I actually start by not looking for fish or birds – just scanning with no focus, trying to keep my field of vision broad. I will try to lock in on any disturbance or speck that comes into my field of vision.

If it is recurring, I will watch for longer, waiting for anything that suggests fish and bird activity. Sometimes it’s major activity, other times it’s minor. Either way, it means you might get closer for a look or cast.

Keep in mind, tuna eat continuously and if they are just gently feeding in sparse numbers, they remain a viable target. I do not use binoculars. I find them cumbersome and restrictive, not really suiting my ‘run and gun’ style. They also cut your peripheral vision to zero. If I was exploring new water, I might use them.

After finding the fish you need to consider how to approach them. That is greatly determined by the behaviour of the birds and the fish. Most of us prefer to use any wind to help drift or idle in slowly on a surface feeding school. If they are sparse and feeding gently, you may need to watch for a while before you attempt to edge in.

Keep your approaches and casting to a minimum. Better, stealthier approaches have a higher conversion rate. Same goes with casting. One good cast equals a fish, as opposed to three or more unsuccessful shots. Holding out for a good shot will also save you energy, and at times when you wait a very good opportunity will arise.

You cannot convert them if you are reeling in a bad presentation. Think of a boxer. They won’t waste energy looking for a knockout on every punch. They probe and watch, and time the appropriate punch when the opportunity is there.

Visit Tri's Fraser Guided Fishing Facebook page @ https://www.facebook.com/FraserGuidedFishingWithCaptainSquinty?fref=ts or give him a call on 0427 230 261 to book a charter.
Previous Bassday Backfire popper
Next Techniques for wading the flats