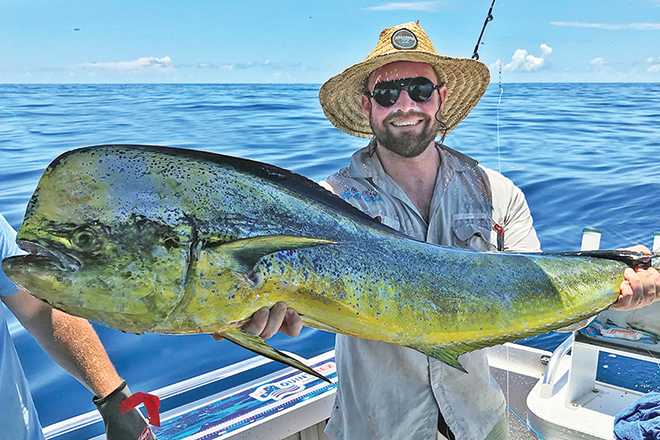 All sorts on offer offshore from Sunshine Coast

MARCH is shaping up to be one of the best months on the Sunshine Coast, with offshore anglers reporting everything from pelagics right through to reef fish including some of my favourites, the magnificent coral trout and delectable pearl perch.

The pelagic catches have been more abundant than usual due to the high concentrations of baitfish present over the past few months. I have not seen such quantities of baitfish in a very long time, and recently I passed over six bait balls between Mooloolaba and Old Woman Island, all holding tuna and spotted mackerel.

The upside to all this has been increased catches of mahi mahi or dolphinfish. Just for the record, these fish are in no way related to the mammal dolphin and no angler would ever wish harm to a dolphin. Mahi mahi are fast growing and feed on a wide range of baitfish.

Males are generally bigger than females and have prominent heads that protrude forward. Mahi mahi are currently being caught all over the place from North Reef to Gneerings Shoal, the Barwon Banks and around any floating structures such as the blinker off Mooloolaba.

Water depth ranges from 30-60m and live or dead baiting on the current lines near the above reefs and structures will land you a good fish. Mahi mahi respond well to berley and will at times follow the trail right to the boat. Coral trout are still on the chew, with top spots being Sunshine Reef and the Outer Gneerings.

The best catches are coming on both live yakkas and big pilchards rigged on a two-gang of Mustad 7766D 7/0 or Tru-Turn 711 6/0 hooks. Tides play a big part in our trout fishery, so try hitting these spots on a run-out tide about seven days before the new moon. One last trout tip is to get the reef firing, meaning drop down your smaller baits such as squid and pillies, allowing other species to be caught first because this entices the trout to start feeding.

Out wider on the Barwon Banks, anglers have managed good catches of redthroat emperor, pearl perch and snapper. I have found the bigger pearlies are coming from 60m-plus of water on the eastern side halfway up the banks. Perfect baits are slimy mackerel with the tail section butterflied.

Use a three-gang of 5/0 Tru-Turn hooks. Letting the last hook lay loose in the tail is the key to snaring the bigger fish. The Maroochy River has seen trevally firing, with most fish hovering around the dog beach, just inside the mouth and around the Twin Waters weir.

Atomic’s Hardz K9 Bulldog has been the standout lure, with the trevally finding it irresistible. The motorway bridge is the mangrove jack hot spot and the bigger fish have been taking live bait and fresh mullet strips. A good tip is to let your live baits drift right back against the bridge pylons because this is where the bigger fish are lying in ambush.

Further upriver, fishing in and around the mouths of Eudlo and Petrie creeks will see you land a feed of flathead.  Slow rolling plastics and drifting small blue pilchards on a snelled rig have been the proven methods. The Noosa River has produced great fish and towards the end of March we will see water temperatures cooling and days getting shorter, which allows the tailor and trevally to school in good numbers, especially around the Woods Bays and the sandbags.

Surface lures such as walkers and poppers are the perfect way to hook up to these fish. Most anglers get good results by finding the schools of bait on the run-in tide and casting popular lures such as Bassday Sugapens and Ecogear PX55s. Flathead are still being caught in good numbers around the lower reaches of the Noosa River.

Drifting along the channel and sandbar edges while throwing prawn imitations and paddle-tailed soft plastics is seeing anglers pick up good size fish. The Flick Prawns from Fish Candy have been dynamite and are the most realistic prawn imitations yet, with the 95mm model perfect for flathead.

Even though the jacks are a little slow, the odd one is still being caught around the pontoons and pylons that line the banks of the river and upriver around the submerged timbers and deeper edges. Boat traffic on the coast slows down in February and March and this gives mud crabs a chance to get out of the quieter areas and into the main river and start feeding.

Both the Maroochy and Noosa rivers have delivered crabs in the deeper sections near the mangroves on river bends and drop-offs. Fresh mullet is still the best bait and don’t be afraid to add a little tuna oil into the mix for extra scent.  Beach anglers have been blessed with quality gutters right along the open beaches.

The strip between Peregian and Mudjimba is definitely the hot spot for big whiting. The best way to secure the larger fish is to use Tru-Turn 063 size 6 red worm hooks baited with live beach worms. Dart are the other fish in plague proportions, which is great because they keep the whole family entertained.

All you need is pieces of pilchard, pipis, beach worms or peeled prawns on a size 2 hook fished on a run-in tide. You’ll be busy as soon as your line hits the water. Noosa’s North Shore has produced large dart from the third cutting to the start of the campgrounds, with pipis and worms landing the bigger fish.

Yaroomba Rocks is the place for snapper and grass sweetlip up to 60cm. Fresh strip baits fished on snelled rigs on the run-in tide should see you land a trophy fish.

Don’t forget to check in to fishingnoosa.com.au for all the latest up-to-date info on fishing and bar crossings. The knowledgeable teams at Davo’s Tackle World Noosa and Davo’s Northshore Bait & Tackle at Marcoola can provide you with the right equipment, bait and advice to ensure success!