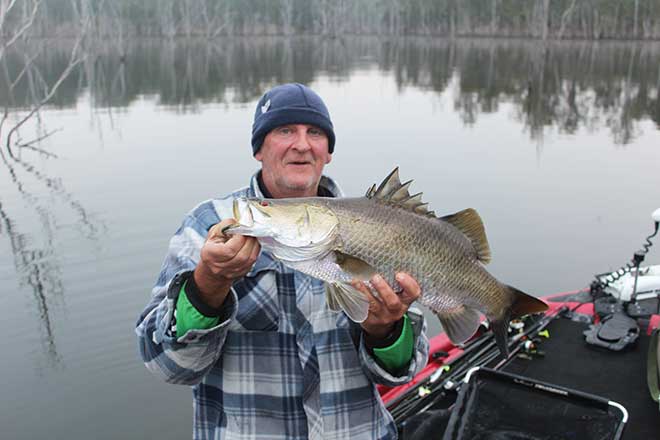 James Munro was freezing while holding this Monduran barra.

LAKE Monduran is definitely one of the most challenging dams I’ve ever fished.

Lake Monduran is such a large dam with plenty of bays, creeks, points and heaps of timber which makes catching Monduran barra tough at times.. Over the past couple of months I’ve been putting a bit of effort into trying to figure the place out. Some trips have been awesome and others not so good. I’ve got to say the stocking group is doing an amazing job. Also amazing is the Lake Monduran Sponsor a Barra program initiated by Julie Whalley.

This program effectively results in donating money to help restock the dam. Monduran will be one heck of a fishery in coming years.  Jump on Facebook and search for Lake Monduran Sponsor a Barra to get involved. As one of the followers on the page said: “If everyone throws in the $20 you’d spend on a lure, this dam would be back to its glory days in no time flat.”

In saying that, this year the fish have really started to come on the chew. I’ll run you through a couple of trips. I headed to the dam in early September and again in late September. What a difference in success rate between these two trips. We had a similar wind direction and temperature, the only major difference was moon phase.

On the first trip we mainly focused from White Rock to the area known as D for a Monduran barra. This is basically the main river channel.

We hit this area hard because of the consistent water temperature. In this section you can find numerous small points with bushy trees in 1-3m of water and water lilies along the edges.

These points were by far the standouts. Dad and I located four points holding barra thanks to our Humminbird Helix sounder with Mega Imaging. Once we found these locations, we moved back and forth because only about 1km separated the spots. We anchored up, fishing the windward side.

Barra seem to get pushed to certain areas on different winds but the wind must be consistent for at least a couple of days. And this is no different for Monduran barra. Anchoring proved the best way to catch fish instead of moving around using the electric motor. By sitting in the same spot and casting our lures to fish-holding areas, we annoyed the fish into biting. On this trip, we didn’t catch any fish at night.

All the fish seemed to bite early of a morning until about 10.30am. Casting Rapala X-Raps and Jackall Squirrels to the bushy trees and water lilies produced the fish.
Long pauses when using these lures – up to 10 seconds – enticed the barra into biting. On this trip we landed 16 barra ranging between 40cm and 80cm. It was great fun around the timber and excellent to see so many small fish being caught and released for the years to come.

On the second trip to Monduran, the temperature was increasing and the wind had been consistently blowing from the same direction for the past week, so it was looking pretty good. The only thing that had us worried was the wind direction was slightly different to the last trip. We looked around the same area for over half the day, expecting the fish to come through, but had no luck.
After this, we branched out, looking at some of our old haunts the wind had been blowing into. Sure enough, we found heaps of barra. It’s amazing how much wind direction influences where the barra will be. Casting Jackall Squirrels and Rapala X-Raps, we ended up landing seven barra, with the biggest going 75cm. Bite periods only lasted about an hour but it was certainly worth it and that’s why we keep coming back.

The 75cm barra I landed gave me an absolutely epic fight. But how I hooked it was pretty amazing. I had a miscast and threw my lure straight over the water lily patch along the bank, ending up snagging the lure on the patch of lilies. I pulled and pulled for a couple of minutes, trying to get the lure off, and when I finally did and cranked the reel twice, bang, I hooked the barra.

It’s amazing to think that after stirring up the place for a couple of minutes a barra would smash the lure. But that’s barra for you. It’s great to see this lake firing and I can’t wait to get back there.

‘Til next time, cheers.

Callum first went fishing with his dad when he was about four years old, and he’s been hooked ever since. He got into freshwater tournament fishing when he was roughly 13 years old and has competed in bass and barra tournaments since then. His biggest achievement on the competition circuit came when he was 16, becoming the youngest person to win a Bass Pro. He eventually became the number-one ranked angler in the Australian Bass Tournament Series and is also part of the Purefishing Pro Team. Callum recently obtained his coxswain’s licence and is in the process of getting his bass boat in survey. When this is done he intends on setting up a charter business, running salt and freshwater charters on the Sunshine Coast.
Previous Beach fishing Fraser Island for the tailor run
Next Catching mangrove jack from a kayak