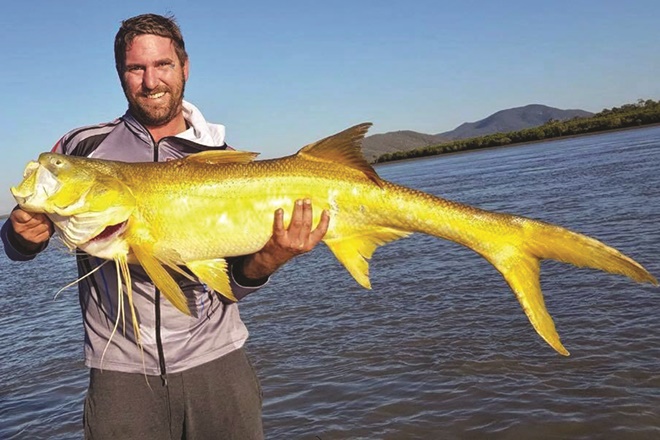 King of the River Mick Chelepy with his winning 1350mm thready.

King of the River a success 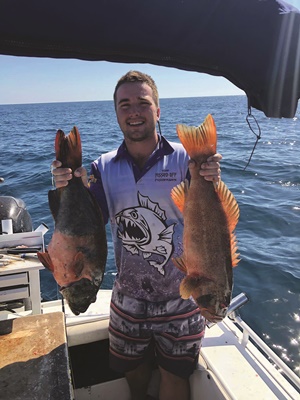 KEPPEL Bay Sportfishing Club, in conjunction with the Criterion Hotel, hosted a cracker king threadfin competition on the Fitzroy River in late August.

Participants said they had a very enjoyable time and are really looking forward to next year. With the Fitzroy River net free for almost three years, expectations were high for plenty of fish. However, the report from the two days of competition revealed a very frustrating time for all. Technology has taken us into the future and it is great to be able to see the fish and where they are sitting but what about if they refuse to bite any lure thrown at them? For most participants this was the norm.

Perseverance was the key, according to crowned King of the River Mick Chelepy who caught the overall biggest thready, which came in at a whopping 1350mm. “We had to remain patient and keep those lures in front of them,” Mick said. It’s been interesting to chat to different people about why the river fished so tough. Most people put it down to the two days of persistent westerly wind.

My opinion is the entire river fished pretty hard this winter. The past two winters were a different story, with regular bite periods. The numbers are there, no doubt about it, our sounder technology tells us that. Darren Griffith finished in second place with his 1310mm threadfin. Another river monster for sure. Gary Mcclelland snuck into third place with a 1250mm model.

The barra were even trickier than the threadies, with once again plenty of numbers sounded but very few bites. Young Zade Van Wees grabbed the biggest barra for the juniors and the biggest barra for the weekend at 780mm. An outstanding achievement for the youngster. For all the photos from the comp, you can jump on the Keppel Bay Sportfishing Club Facebook page and stay up to date with planning for the 2019 comp. Next year’s dates have been set for August 24 and 25, so make sure you put those in the calendar.

The main word on the grapevine is school mackerel have been biting well. The water in close has been clean for a long time, so it’s no surprise the macks have turned up on cue. There’s also plenty of yorkies around and generally when the yorkies are thick and in close the macks aren’t too far away. I recently had a good chat with Paul Newbecker, owner of Emus Beach Resort at Emu Park.

Paul has seen days when the macks have turned their noses up at any bait presentations thrown at them. On these days, Paul has resorted to the old-faithful Flasha lures burned back to the boat. This has made the difference on a tough bite.

We’ve heard great reports of big spanish being caught from the outer Keppel Islands north to Manifold. The gun spanno fishers have been doing the damage by slow trolling baits like gar and ribbonfish. The use of a downrigger has kept the bite going once the sun has come up and the macks have gone deep. Red fish continue to run and we’ve seen numerous captures of large-mouth nannygai and red emperor from the wide pinnacles and fern grounds. Check out young Riley’s photo of a horse nannygai he caught while fishing with Tim Price from Double Threat Charters Yeppoon. Tim said this horse swum straight past a fresh yakka to nail a bit of old squid, so it pays to vary your baits.

Trout have been on the chew from the Outer Rock/Barren area up to Flat and Perforated islands and out east. Bommies holding large shoals of bait have been the main areas targeted. I was recently out fishing some of the ground mentioned. We were using big live baits and the first hit resulted in an epic bust-off, with nothing but shredded leader making its way back to the boat. The second hit came on a smaller live bait and I was able to boat a lovely trout. Don’t be afraid to use big live baits when chasing trout. Just make sure you’ve got the required gear to have any chance of getting them off the bottom.

This is the final month to get your barra fix, as old saltwater pink eyes will be off the target list from November 1 through to February 1. The good news is water temps are looking great and the barra have responded well. The town reaches of the Fitzroy have begun fishing pretty consistently, particularly the bommies around the old bridge. I’m really hoping we don’t get our first flush of fresh down the river until after the season has closed. The Rocky Barra Bounty will be running from October 16-18 and it would be great to have the entire Fitzroy River fishable for the comp.

We have missed out the past two years, with the river running fresh during the comp. It would be great to see what sort of barra numbers the comp generates with the entire net-free zone fishable. Blue salmon have slowed a bit but have still been caught in numbers from Port Alma and Corio Bay. Threadfin are as plentiful as ever around the region, with Coorooman and the Fitzroy the pick of the places to target them. Most of the metre-plus threadies I’ve caught over the years have been on 3” prawn imitation lures. It’s true that elephants eat peanuts, with the Berkley Gulp 3” Shrimp a clear winner. They don’t have much action but they work a treat. Grab some 3/0 jig heads in weights from 1/4-5/8oz and you’ll be covered for most situations.

A fantastic event where we get to chase an iconic sportfish and catch up with good mates.

Keep an eye out for a detailed report in coming months.