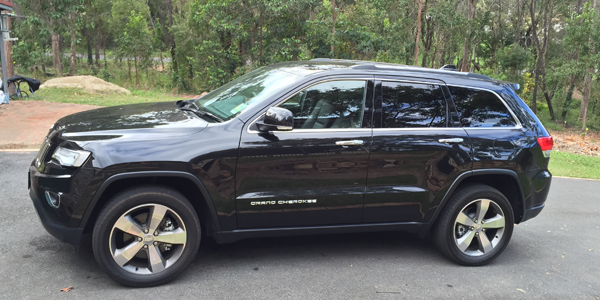 However, being completely honest, I was somewhat apprehensive prior to arriving at Cricks Mt Gravatt to pick up the diesel Jeep Grand Cherokee I had arranged to drive for a few days. I’m a small, light and fast car kind of guy; I didn’t want to be stuck navigating through traffic in a slow and hulking 2.2-tonne tank.

Well luckily for me, the Jeep Grand Cherokee totally obliterated my preconceptions. Pulling up at the dealership, I was immediately impressed by my Jeep Grand Cherokee Limited Diesel’s Black Crystal Pearl duco, 20” wheels and amazing level of interior kit. This thing was a rig.

Charlotte and Beth from the awesome Cricks team helped me find my way around the car (keyless entry and push-button start, ooh la la) and got me on my way. After firing up the surprisingly smooth diesel, releasing the foot-operated park brake and ‘flicking’ the stubby shifter into D, I was away in total comfort and luxury.

One thing I quickly noticed was the lack of an indicator or wiper stalk on the right-hand side of the steering column. The indicator, wiper and high-beam controls were all located on a stalk on the left-hand side, which helped to avoid embarrassing wiper instead of indicator moments when stepping out of a car with the stalks the right way around.

I didn’t mind having everything on the left and very quickly became acclimatised. While I’d had my hopes set on testing an SRT-8 model (because who doesn’t love a bit of V8 thunder?) I soon learnt my Limited Diesel was no slouch. Pulling away from the lights near the Mt Gravatt dealership, I was surprised by how ‘boosty’ the three-litre diesel powerplant felt.

Minimal pedal movement was required to trundle along in traffic, with a slightly firmer prod of the pedal resulting in a happy whoosh from the engine bay as the turbo livened up proceedings. My pick-up time had coincided with the 3pm school run, so while sitting in school traffic on the way to BNB HQ I fired up the nine-speaker sound system.

Chilling out in the super-comfy leather seats, I adjusted the audio settings on the easy-to-use Uconnect 8.4” central touchscreen system. With just the right amount of bass dialled in, I cranked the volume using the steering wheel-mounted controls, buzzed the windows down, hung my right arm on the window sill and felt like a total boss (though probably looked like a total tool).

I let out a laugh and had to smile; I was really enjoying this Jeep caper.

Something I absolutely loved about my Grand Cherokee was its amazingly smooth and ergonomically pleasing leather-wrapped steering wheel. It really was a delight to hold and did a decent job of communicating the big Jeep’s extraordinarily car-like handling.
This Jeep wasn’t an ungainly tank at all; it actually went around corners and provided a reasonable level of satisfaction in doing so.
I was shocked.

While it certainly didn’t handle or steer like a proper sports car, for a 2.2-tonne four-wheel-drive it was far from shabby. And the turning circle, my God, the turning circle was one of my favourite things about the car over the long weekend test period. The spec sheet claims an 11.6m turning circle, which means my N15 Pulsar must have a 25m turning circle because this gigantic Jeep could literally run rings around my small hatchback.

Having learnt to drive in a Subaru Forester XT (probably the most car-like SUV for years) and subsequently driven the odd Pajero, Patrol and LandCruiser, the way you could wind in so much lock to make tight carpark turns in the Jeep was a revelation and put the above cars to shame.

The TFT instrument cluster was beautifully clear and the digital speed readout large and easy to read while moving. Scrolling through using the steering wheel-mounted controls allowed me to geek out on some seriously cool features. Tyre pressures, engine oil and transmission temperatures, instant and average fuel consumption, terrain selection and more can be monitored on the 7” display.

I loved checking the oil temps and seeing how different situations and driving styles affected them. On the subject of interior capability, the Grand Cherokee’s Bluetooth connectivity with my iPhone 6 was flawless. A lot of cars have issues connecting to and communicating with mobile phone Bluetooth systems, but in the Jeep it was a simple matter of navigating to the Bluetooth pairing menu through the Uconnect display and letting the car and phone work it out.

From then on, every time I stepped into the car and fired it up, my iTunes would automatically begin playing from wherever a song was when I left the car. Cool stuff.

Receiving and making calls was also a cinch and was once again done through the Uconnect display or wheel-mounted controls. This latest iteration of the Grand Cherokee certainly carries plenty of street cred, with the cool LED daytime running lights and exceptional HID headlights meaning no one is going to miss you on the road. The chunky five-spoke 20” polished alloys fitted as standard on the Limited model suited the car to a T and were wrapped in 265/50 R20 rubber, giving the car a tough stance whether on the move or stationary.

Chrome accents abound on the exterior and also within the cabin. This ‘chrome all over’ approach can come off as tacky and try-hard on some cars, but it really gelled with the Grand Cherokee (especially with the black paintwork) and I felt it helped elevate the car to a higher rung on the luxury 4WD ladder.

The comfortable leather seats and exceptional fit and finish throughout the interior aided in the luxury feel and made the Jeep a genuinely enjoyable place to be. Getting in and out of the vehicle was made easier by a self-moving driver’s seat and steering wheel.
Climbing into the (relatively high-riding) Grand Cherokee and punching the engine start button results in the seat sliding forward and the wheel lowering into your preset positions. After turning the car off, the opposite occurs and the seat goes back and the wheel up.

It makes the mundane occasion of getting in and out of a car that bit more special. Another cool feature is the push button to open and close the tailgate. Simply tap the boot button on the key fob and the tailgate will unlock and completely open. Then do the same thing or press a button located just inside the boot and the tailgate will lower into place and latch itself closed, saving you from having to free your hands to reach up and grab the tailgate to close the Jeep’s rear end.

The reversing camera with guidance lines is another feature of the Grand Cherokee Limited that’s designed to make drivers’ lives a little easier. I’d never driven a car with a reversing camera before and for the first day I didn’t look at the Jeep’s screen at all.
Flicking the shift lever into R resulted in the side mirrors automatically adjusting downwards to improve rearward vision and the 8.4” central screen coming to life, displaying exactly what was behind the car.

On a couple of tight reversing turns I decided to check the screen and was impressed by how clearly it displayed the camera’s vision (even at night) and the guidance lines proved a great indicator of where the car was going to end up. By the end of the test I was checking the screen more often than not, and it was simply so easy to become accustomed to. I had only one bugbear with my Jeep: the lack of a footrest.

While not a huge fan of the foot-operated park brake, I quickly acclimatised to it, however the bulging centre stack encroached on footwell space and not having a footrest meant my left leg either had to sit on a funny angle or rest at 90 degrees as you would when sitting at a desk. This was a non-issue on shorter trips, but after an hour of driving my leg was getting uncomfortable and I found myself moving it a lot to help ease the discomfort.

Playing around with the fully power-adjustable seat may have somewhat solved the matter of discomfort, but the fact remains that a footrest and traditional or increasingly popular electric (push button) park brake would eliminate the problem entirely. The only way to know if this will be a problem for you too is to get out and test drive a Grand Cherokee.

When it comes to the models available to test, I never thought I’d say it, but I can strongly recommend the diesel variant. While I didn’t sample the petrol V6 or V8 models, I was so impressed by my Limited Diesel that I don’t think there would be a need. The 2988cc V6 turbo diesel produces an impressive (for a diesel) 184kW of power at 4000rpm and 550Nm of torque at a ridiculously low 2000rpm. No wonder it felt so boosty down low.

Few diesels I’ve driven are as refined as the Grand Cherokee’s unit, and none are even close to being as quick off the mark. Funny as it sounds, if you’re a traffic light warrior it would be hard to go past a Diesel Grand Cherokee; literally. It’s a rocket at the lights, and all those who attempted to blast up the left merge lane during my test period were soon greeted to a view of the Jeep’s understated yet classy rear end.

And this was all without getting close to flooring the throttle. It was a bunch of fun.

Even with some full-boost applications and plenty of stop-start driving, the low-kilometre powertrain returned an average fuel consumption figure of just 10 litres per 100km, down from 11.5 per 100km when I picked the car up. I’ve little doubt an extended test period and a bit of highway running would see the big diesel 4WD averaging better than nine litres per 100km.

All this with a maximum (braked trailer) towing capacity of 3500kg. If this car can’t tow your boat, you need a smaller boat.
Unfortunately, while the test car had a towbar I didn’t get a chance to hook anything up to the back of it. Regardless, I’m confident you’d hardly feel a medium-sized trailer boat behind it – it’s that grunty.

The Jeep Grand Cherokee is a truly special vehicle in almost every way. Immense levels of technological sophistication yet a unique and loveable charm make the Grand Cherokee Limited Diesel a genuine buying proposition for anyone wanting a proper luxury 4WD without a whopping price tag.

I miss my Jeep.

If you’d like to investigate a Jeep for yourself, be sure to visit cricksmtgravatt.com.au or stop in at the Cricks Mt Gravatt yard located at 1323 Logan Rd, Mt Gravatt.

Daniel is BNB's subeditor and occasional fish-wrangler. If you've got a great story or at least an idea for one, flick Dan an email at editorial@bnbfishing.com.au
Previous How to choose your first compound bow
Next Nice conditions for fishing on Gold Coast 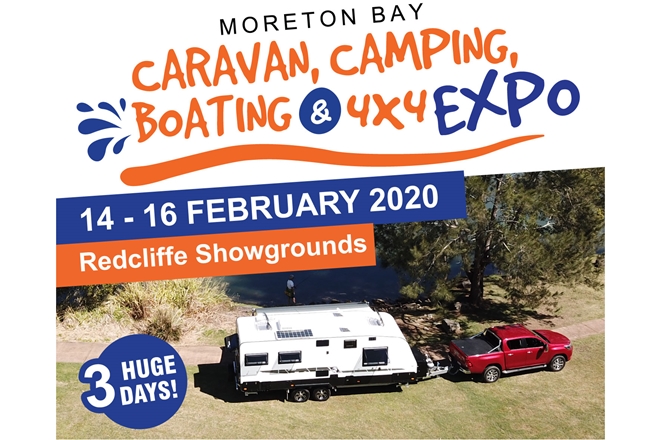 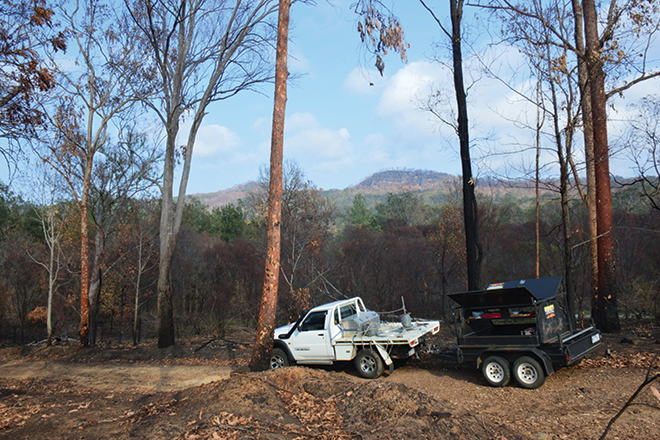 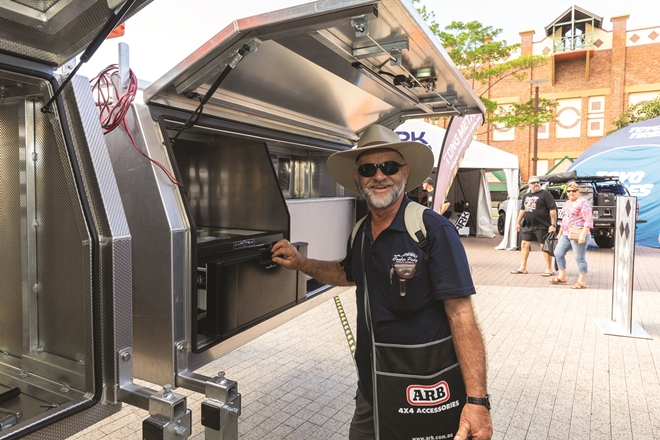 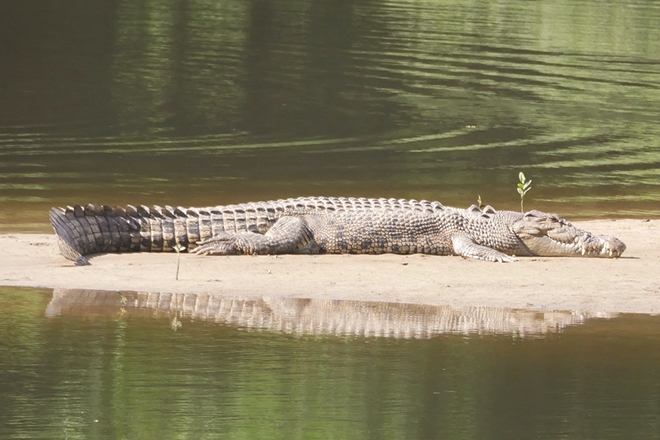 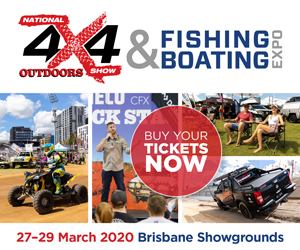