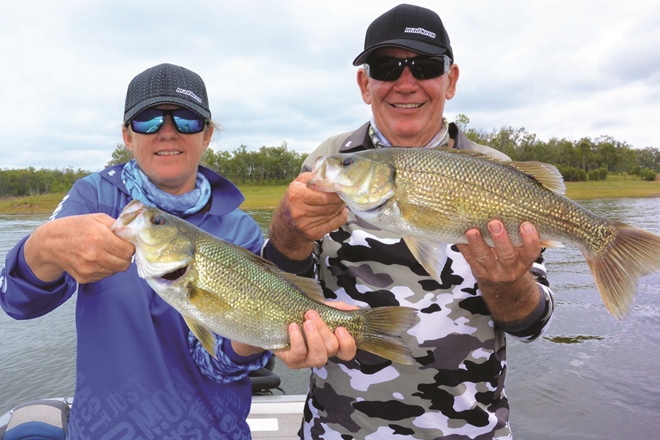 Sam and Ernie Bushell with a couple of cracking bass caught by casting near the wall at Boondooma.

Freshwater fishing in the South Burnett

THIS is a great time of year to be outdoors with family and friends and it’s also the best time to go freshwater fishing because the temperatures are hot, the beers are cold and the fishing is accessible to every angler of any ability.

If you haven’t been out yet, make sure you start planning your next freshwater fishing trip because now is your best chance to get yourself onto trophy size native fish from Lakes Barambah and Boondooma.

Over the past couple of months, the fish have moved into the thermocline in Boondooma Dam and are a real target for avid trollers. The 4.5-7.5m zone is where you will find them and the most productive areas on the dam are the deeper sections of water around the dam wall and buoy line. This dam’s most productive bite time is from lunch time through until dark when the day is at its hottest.

The key to finding a good school when freshwater fishing in the South Burnett is using your electronics to slowly sound over likely areas. If you don’t have a sounder, tie on a couple of deep divers or a 5/8oz spinnerbait and start trolling. If you get a bite or a fish, troll around the area where you had the action. Remember to be patient when looking for fish because it may take a while to locate them if you’re not familiar with the dam.

Lately I’ve been catching my best-quality fish suspended in deep water. They have been sitting in the thermocline at 4.5-6m. I target these fish using a variety of baits, initially starting with a soft bait of a 1/2oz-rigged soft plastic. I cast this out and count to seven to let the lure sink into the strike zone. Once the plastic reaches the desired depth, I start a slow roll and add a few twitches every now and then to change the swimming pattern as the plastic glides through the water. Continue this until you get bites, but keep rolling the plastic until you get a solid hook-up.

If this method doesn’t work, don’t be afraid to change your lure until you are happy. Bass can be fussy about feeding when they are suspended in the water. I like to try plastics first and then move to a reaction bait. My preferred reaction baits for summer suspended fish are 12-20g spoons such as the Nories Wasabi, Halco Twisty and Palms Slow Blatt. With these lures, make a long cast and let the lure sink for five to 10 seconds.

Once the lure is in the zone, start a fairly rapid retrieve with a few twitches every now and then. This is where the fish are forced to either ignore the lure or react out of instinct to bite as the bait zooms past. It’s a very effective method, with bass well over 50cm regularly hitting the deck. Trollers are catching really nice fish using deep-diving hard-bodies and 5/8oz Bassman Spinnerbaits around the same areas mentioned earlier. The key is to be patient.

Bait fishers are picking up good numbers of bass and yellowbelly using live shrimp caught from the dam. Try to anchor over prominent points in the dam in 4.5-6m of water and also try the timbered sections. Red claw have been a little slow but drop your pots around the rocky banks of the dam and just wide of the weed beds.

Barambah (Bjelke-Petersen Dam) has been very consistent for anglers keen on freshwater fishing over the past two months, producing numbers of fish of varying species and sizes. The fish are in great numbers but it just takes a bit of moving around to put yourself onto some quality. Areas to target are the deeper water out the front of the dam wall, wide of Bass Point and any main dam points that feature deeper water of about 6m. The fish have been sitting in the 4.5-6m depth range and I’ve been catching the majority using a 1/2oz-rigged plastic, fished with the same method as explained for Boondooma.

Heavier spinnerbaits and chatterbaits have been working well on the bigger fish when focusing on the reaction bite. Big yellowbelly are being caught but generally they have been a bit quiet. The key to catching a few goldens when it’s quiet is to focus on fishing the bottom or around the many weed banks that encompass the dam. In this case, tie on a blade and hop it gently off the bottom or out of the weed.

Yellowbelly are real suckers for a hopped blade and it won’t take long to catch a few fish using this technique. The smaller bass also don’t mind this technique but it won’t be long before you’re in contact with some fat golden perch. Trollers are getting good bags of fish by trolling 5/8 Bassman Spinnerbaits (awesome lures for most freshwater fishing situations) and deep-diving hard-bodies. Areas to target are the deep water in front of the dam wall, Bass Point, Lightning Ridge and around any prominent points. Bait fishers are scoring plenty of fish just wide of the steeper rocky banks.

Don’t try to head up the back of the dam because the water level is low and you will get stuck in the mud. If you’ve had enough of freshwater fishing for bass and yellows, red claw are about and coming from the steeper banks with scattered timber. Make sure you book your campsite for the 2018 Boondooma Dam Yellowbelly Fishing Competition on February 10 and 11.

Entry is $20 for adults and $5 for juniors 16 and under. There are live and dead weight divisions with prizes for bass, yellowbelly, silver and spangled perch. Thousands of dollars’ worth of prizes are up for grabs and food and drinks will be available. It’s one comp you don’t want to miss.

Call the Lake Boondooma kiosk to make a campsite booking on 07 4168 9694. If you’d like to keep in regular contact with what’s happening on the dams, don’t forget to like the Yallakool and Boondooma Facebook pages.

I have recently started a fishing charter business on BP and Boondooma dams. If you’d like a great day out with all the info and knowledge to catch bass and yellowbelly in our two great dams, give me a call on 0408 658 592 and I’ll be happy to take you out for a great day’s fishing.

Until next month, tight lines and bent rods.