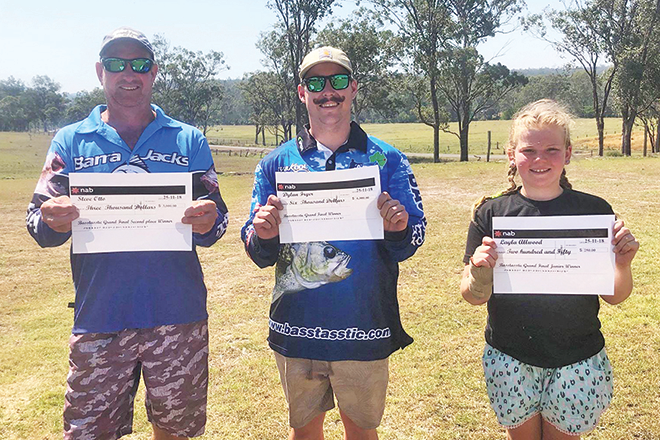 YOU can only hope when you put on a grand final that it all goes to plan.

With good money and prizes totalling about $28,500 up for grabs at the end of 2018, we knew all the anglers would be out to win. In this case, the weather, wind and fish were all in favour of the 40 top senior anglers and four juniors who fished at Cania Dam for the 2018 Bass Fishing Grand Final. No doubt all anglers were after the $6000 and Nifty inflatable boat for first place.

Every year a Calcutta auction is run, auctioning off the senior anglers. Yes, you get to buy who you think will win and the payout of the Calcutta runs to three places. You can buy as many anglers as your wallet allows. A huge pool was put together, with punters laying down $3500. With Cania looking so good in the morning on day one it was easy to get lost in the beauty of the place.

This is the perfect finals dam. Session one saw a determined group of anglers fill the top 10 places. Ben Jensen, a local from Monto, hit pole position for the start of session two after scoring 867 points in the morning. Not far behind was Jordan Renz of Bundaberg with 840. Anything could happen from here and the second session would determine who was going to be very nervous overnight.

In the end it was Dylan Fryer of Hervey bay who hit the lead at the conclusion of day one with a cracking 1619 points. Steve Otto of the Sunshine Coast was hot on his heels with 1615 points and Ben Jensen was hanging in there with 1589. Braden Schuch of the Sunshine Coast had moved up the leader board too, posting 1581 points to be sitting in fourth.

Ten anglers were in reach of the winner’s trophy. Talking to these anglers on Saturday night about what day two could bring was short but sweet as they all knew how easily things can change in a final. Drop a fish and your chances are gone. The morning of day two broke for the final session and it looked no different to day one.

The beauty of Cania was there and the fear factor among anglers was high.  At the end of the session, it was all about Dylan Fryer. He came to fish this final in a dinghy and fished on his own. He didn’t have anyone else to blame if something went wrong.

Dylan had to make his own choices but envisioned the win and made it happen. He won the final with a score of 2527 points after catching even bigger fish on day two with 458mm and 450mm to the fork bass. Dylan told me it was a dream to win and he was very humble but so excited that he was able to do it.

During pre-fishing he found a couple of areas producing where he had caught fish in the past. He said Cania is a special place for all anglers who get to fish there.
Dylan took home $6000 cash plus a Nifty inflatable boat kindly donated by Compact Fishing Australia.

He also won a wallet hand made by Trevor’s Leathers with all his winning details on it and of course the golden winner’s trophy. Dylan even cleaned up the biggest bass cash pool with his 458mm to the fork bass. And to top it off, his dad bought him in the Calcutta for $135 and won $1750 cash.

Second place went to Steve Otto who gave it a good run, bringing in two more good fish to total 2484 and win the silver number two trophy and $3000 cash after a big weekend. Gavin Sticklen bought him in the Calcutta for $165 and took home $1050.

In third place was Braden Schuch who scored 2419 points and won $2000 cash and the bronze third place trophy.

In the junior division, Layla Allwood of Wondai scored 2178 points and won $250 cash as well as a lure package and trophy with a total value of $800 and donated by Bill and Cindy Schloss. Emma Wojtasik of Nambour came in second place after scoring 1945 and won a Shimano Zodias spin rod and Shimano Sedona 1000 reel valued at $440 and donated by Shimano Fishing Australia.

The third placed prize of a $100 BCF voucher donated by BCF was won by Trey Crumblin of Bundaberg with a score of 1908 points. A big thankyou must go to all the sponsors and helpers. You know who you are.