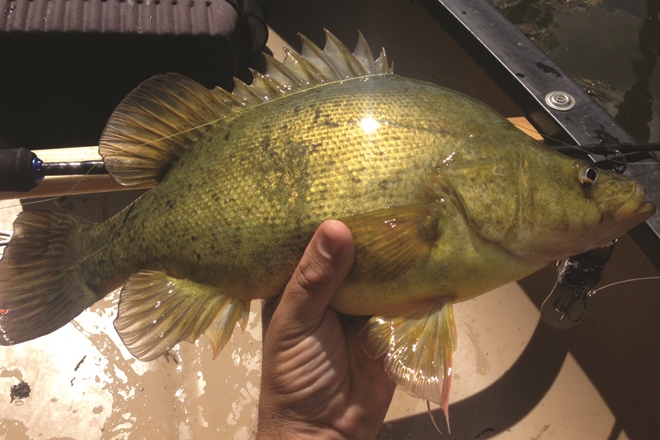 This perch came from the depths and struck at the author’s feet.

HI, my name is Wade Turner and I am a freshwater fishing guide based in Toowoomba.

I am the owner and operator of both Cod Hound Kayak Tours and Cod Hound Spinnerbaits, and I hope to share with you my knowledge of all things related to catching Australia’s iconic freshwater fish species. Golden perch (macquaria ambigua), commonly known as yellowbelly, are found in most freshwater rivers and creeks in and around the Murray-Darling catchment system and many stocked impoundments. They come in all shapes and sizes, with an average size of 40cm and 2kg, but growing right up to 78cm and 9kg in some impoundments.

In 2004 I was lucky enough to land one of these fabled impoundment monsters that measured 75.5cm and weighed 8.4kg.  Needless to say it’s a PB I will not be beating any time soon.  The closest I’ve come since is a 62cm model.

Yellowbelly range in colour from a pale silver to deep yellow, metallic gold and even black or dark grey.  Their colour depends on their habitat and the water clarity. They are fun to catch in shallow rivers and put up a considerable fight.  Scouting for and discovering hard to access areas is something I like to do as a pastime and nine times out of 10 it is very rewarding. As the old saying goes: do the miles, get the smiles.

One such place is the Cooby catchment area, which recently rewarded me with 15 yellowbelly, all over 45cm, with the biggest going 52cm. I fished from my canoe, an Old Town Discovery 119.  I used Cod Hound Spinnerbaits in purple, pink and black. My outfit consisted of a 13 Fishing Concept E reel paired with an SG Custom rod. Because the area is very snaggy, I fished 20lb braid and 20lb Gamma leader (the stuff is insanely strong).

My first fish came on my second cast parallel to the bank. It was a 49cm yellowbelly and I extracted it from an undercut bank.  My next two casts resulted in two more fish coming from a snag on the opposite side of the river. I pulled one from the middle of the sub-surface snag and then on the next cast its friend took the spinnerbait on the drop in about 3m of water.

I kept working the edges of the creek and varying the speeds and depths of my retrieves. A couple of fish were hooked at my feet with only a couple of inches of leader in the water, which tested my rod tip. After a successful six hours fishing with spinnerbaits, I tied on a new addition to my tackle box: the Caino Prawn by Caino Lures.

Because it was getting dark, I was merely testing the lure’s swimming action with less than a metre of line out. It proved too much for one golden perch, which raced in and thumped the lure on the bank’s edge.

If there is one thing I can’t stress enough when fishing with spinnerbaits it’s to mix it up with fast and slow retrieves. Let your lure find the bottom occasionally and retrieve at various depths by pausing for different periods after casting and before retrieving. Don’t be afraid to cast into structure. In most cases, if you’re not knocking wood, you’re not catching fish.

Experiment with colours too. Both bright and dark colours will give you positive outcomes in different conditions. If something is not working, don’t be afraid to change your colour or blade configurations.

The next day saw my fishing companion Simon and me on the Condamine River.  I started working spinnerbaits in the same way as the day before but to no avail.  After changing my colour three or four times I decided to fish a Jackall TN60 in Brown Dog because Simon had already caught three golden perch on that lure.

There was something about that particular lure and its colour that really stirred up the fish.

Straight after tying it on, I hooked three yellowbelly one after another. Simon also managed a couple of decent Murray cod at 60cm and 70cm. This just goes to show that no two river systems fish the same.

It soon became apparent that regardless of what lure we tried, if it wasn’t the TN60 in Brown Dog we wouldn’t catch fish, which proved diversity and being able to find a lure to entice the fish is the best weapon in any kayak or canoe angler’s arsenal.

Wade is a freshwater fishing guide based in Toowoomba. He is the owner and operator of both Cod Hound Kayak Tours and Cod Hound Spinnerbaits, and hopes to share his knowledge of all things related to catching Australia’s iconic freshwater fish species.
Previous Illegal Nets Found in Wine Barrels (Fined $2500)
Next Potato Fritters Recipe