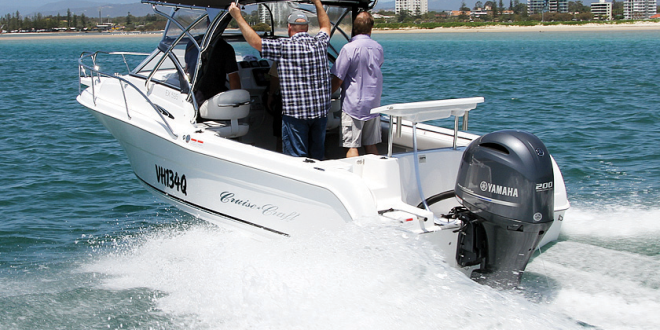 Making sure your engine and boat are well balanced is vital for good performance.

ONE thing I try to do when reviewing a product, whether a boat, motor, reel or even a lure, is to be very open and honest and give an objective evaluation. After all my reputation is at stake and if I give something a wrap and it misses the mark I lose credibility.

Generally when doing a boat test you only get a short time for an evaluation and usually with just the one motor. However, recently I had the chance to have a run in the CruiseCraft Explorer 595 on a couple of occasions in varying conditions, with two different motors.

Initially I had a play out in Moreton Bay with my fiancé on board (always good to get the other half’s opinion) in relatively ordinary conditions. There is nothing like a stiff nor’-easter and run-out tide to generate some sharp short waves.

While I didn’t push the boat too hard, it easily ate up the chop as I powered straight into it and literally over the top.

On this occasion the boat was fitted with a Yamaha 175hp HPDI engine. And while a very good match, Nathan Nichols from Wynnum Marine suggested I go for another run in a few weeks’ time. Although he didn’t disclose why, I had a hunch it had something to do with a new engine as I had been invited to a Yamaha media day the following week.

I have always liked the performance of the Yamaha HPDIs, with plenty of punch out of the hole at any point in the rev range as well as good fuel economy. But with the advancement in technology and the new 4-strokes becoming lighter and more potent I can understand the move towards them.

It wasn’t long before I was back in the Explorer 595, and you guessed it, with a 4-stroke on the back.

My initial thoughts were that it was going to be a 175hp (which I think might be just around the corner) however I was wrong and a brand new light-weight 200hp 4-stoke Yamaha was sitting on the back. Obviously I was keen for a ride, so along with a few other media people we went for a run in the Broadwater.

Sometimes I think I might be a bit biased when it comes to the CruiseCraft boats because I do get to spend a bit of time in them, but it was interesting to hear the comments and discussions predominantly about the smooth ride and quality finish. These are probably the two things that define CruiseCraft boats and back up my opinion of them.

Staying at the pointy end of the wedge is no mean feat and many hours are spent refining what is already a great boat.
This kind of pride and dedication has kept CruiseCraft moving forward for over 60 years.

I have also been a big fan of the 625 Outsider, but I think that might be slowly changing with the 595 Explorer now getting the nod.

Its high swept bow gives it a distinct advantage in rougher conditions, especially when crossing coastal bars. Combine this with a finer entry and inevitably you end up with a softer and drier ride.

Some of the traditional hull features are still present, with the planing plank and general hull geometry which has been proven over the years. However a new sleek one-piece deck profile has been incorporated into the 595 with a full length patterned fibreglass floor liner that extends up the sides to just under the gunwale.

All the positive fishing features have been kept and you will still find plenty of room to fit your toes under the full length pockets, with the coaming at a great height for comfort.

The 595 Explorer could be classed as one of the mid-range models, but it has really been developed for the serious hard-core recreational fisho.

When it comes to fishing space, ample room is provided, with the 2.44m beam and cockpit positioned slightly forward.

In saying that, there is still a good size cabin with a large access hatch to the anchor.

Ample room is available at the helm for three people to stand and it is still possible to walk around the outside of the cabin to the bow of the boat.

The recessed toe rail gives you enough foot room to move to the bow if required.

Other modifications have resulted in a very well-balanced hull, and moving the fuel tank a little further forward was a good idea, especially with the 200hp Yammie on the back.

This also allows the kill tank or storage bin to be placed at the rear, which makes more sense as it is closer to the stern and keeps the water further away from the cabin area.

It’s these little refinements that have contributed to an improved fishing and boating platform.

Another feature of CruiseCraft boats is the list of standard inclusions, while you can also customise your boat with an extensive list of options.

By providing both services you get the boat package you what with the knowledge it will last for decades, enabling you to enjoy years of hassle free boating.

So how did it perform?

Well you just have to look at the figures on the performance bulletin to realise the 200hp is a great match, power and weight wise.

Even with four people on board and driving against the tide, we easily hit and held 80km/h with a fuel burn of one litre per kilometre.

While generally you wouldn’t run everywhere flat out, the 595 was noticeably stable and safe even at speed.

In fact it was actually very easy to drive, and I guess that goes back to the hull refinements.

Now you can be excused for thinking that the 200hp may be a little thirsty because it is a big engine, but the new model is lighter, which is partly because it’s a four cylinder instead of the previous six, and is actually very economical.

With a peak performance of 2.18km/l at 3000rpm and 34km/h it is easy to see how well these two new products are matched.

Couple this with the 190 litre underfloor fuel tank and your offshore options are almost limitless.

Internally, there haven’t been massive changes.

The dash still provides ample room for an array of electronics that seem to be getting larger and more powerful.

The seats have been refined with sleek new lines that hug you firmly in place, and the targa and rocket launcher modified to suit the new lines.

Overall, an exceptional all-round package designed by fishos for fishos. 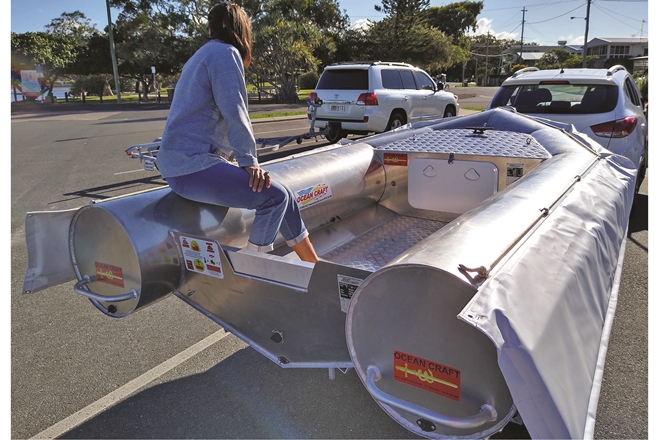 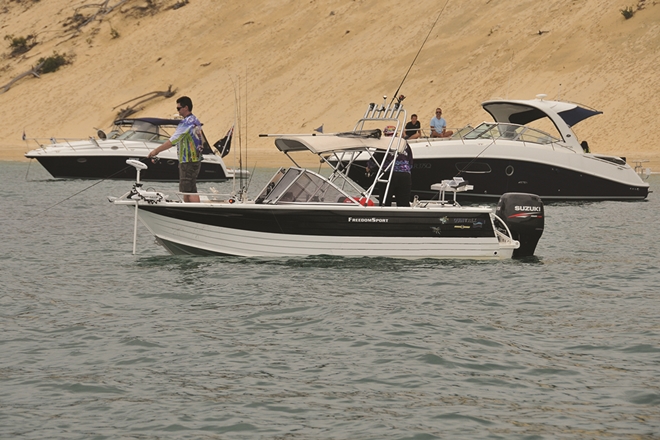 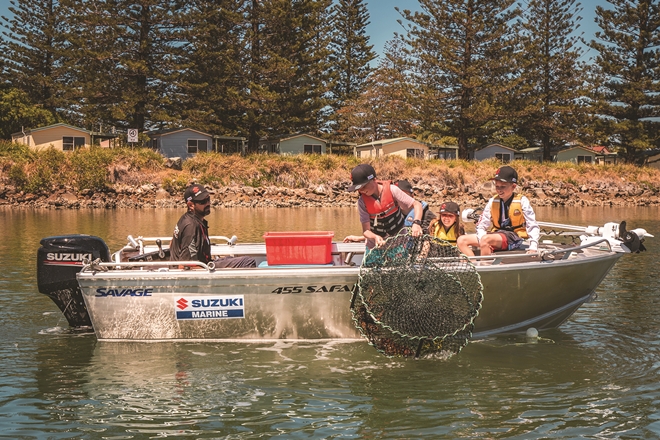 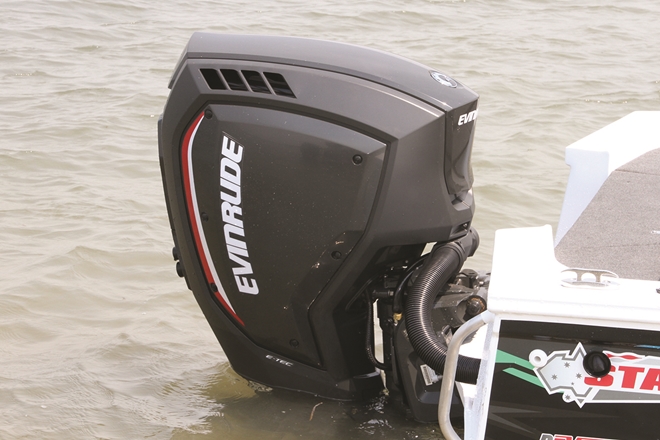