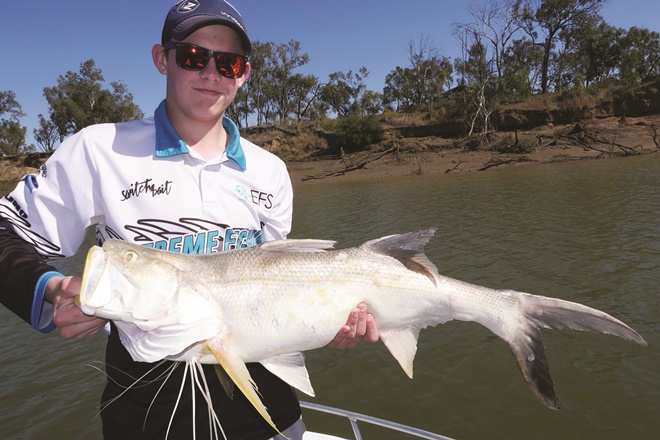 IT’S been a long wait but spring is finally here.

You can start to box up the winter warmers and put away the heaters. Overall, I would call this winter a mild one. We didn’t see too many awful cold days in the low single digits. That probably means we are in for one hell of a hot summer. So what’s been happening in the creeks and estuaries around the Capricorn Coast area? Well the barra have been very slow but should start to increase in activity with the rising water temps.

I went on a barra fishing trip in early August with my sister Cassee, nephew Linkin and one of Linkin’s good mates Ben. We put in a massive day casting lures and were only rewarded with one king threadfin for our efforts. It was a quality thready though, going 109cm. Linkin was the birthday boy, so it was great to see him dragged all around the boat and to top it off it was his first ever. How cool is that!?

We came back to the Fitzroy for round two the next day. The day before was a mistake on my behalf. I should have got some live baits for the boys to use because continually casting lures can get boring very quickly, especially in the cold water temps.

We cast netted some top river prawns and before long had the live bait tank almost overflowing. Once we were done with the bait collecting, we went about sounding some likely spots with the Humminbird Helix. It wasn’t long before the Mega Imaging showed us some mighty-fine barra shadows. We rigged the live prawns with minimal weight as the idea was to cast them into the snags and let the current waft them past the ambush points. The action was almost instant, with Ben hooking up to a feisty little thready. The little tacker was brought on board and sent back with a cool yellow tag to hopefully be recaptured again one day.

Linkin returned serve with another little thready and the banter between the boys was very amusing. Ben hooked up next and a little barra got airborne. You beauty, Ben had never caught a barra before, so this just made my day, and his! We got a few happy snaps, inserted a tag and put the barra back into the briny. Ben was all smiles after that capture. The next hook-up was a bit more intense than the last few. Linkin’s prawn got hammered and we watched as a better barra jumped straight into the snag pile. I thought it was a lost cause until the fish turned and headed out. Linkin was very lucky.

A few cool little jumps and we had Linkin’s barra on board. He was proud as punch with his 61cm barra, and this one would be taken home for the dinner table. After this spot went cold, we headed back to the town reaches to look for the plague proportions of threadies that had been hanging out through the moored boats. There yesterday but gone today. We searched around and eventually found some numbers sitting hard to the bottom on some rocks. Linkin nailed the only thready from this spot before they scattered from the activity. It was a tough weekend overall but we managed to boat a few.

A surprise gracing the pages of local social media is decent numbers of mangrove jack. I’ve seen several of the local young guns getting amongst them, and on lures too. You know it’s been a mild winter when the jacks are still keen to play.

Flathead have been very active, with some mighty fine specimens coming from Corio Bay and Coorooman Creek. Live prawns have been doing well and for the lure fishos, small curl tail soft plastics around the 2”-3” size have been the go. I’ve read a lot about the southern anglers throwing big plastics for big flathead. It’s something I’ve never heard anyone talk about here. It would be worthwhile taking note of those tips and techniques and giving them a whirl here. I’m sure the big girls will be there, it would just be a matter of trial and error.

Offshore fishing has been very good of late, with plenty of opportunity to head wide. Red emperor and large-mouth nannygai are chewing pretty well, with the smaller patches producing the better quality. Black jewfish have been testing anglers on all the inshore spots like Corio Heads and Finlays Reef. The wrecks around Stockyard Point and the Pinnacles have been fishing well for grunter and jew.

There’s nothing worse than grabbing the light gear for a grunter sesh and the jewies firing up. It’s a good way to lose a lot of gear quickly. Recently I did a wide overnight trip northeast from the harbour at Yeppoon with my dad and one of his best mates. It was one of those nights where we just couldn’t locate the hungry fish. Six fish is all we could manage and those were a mixture of nannygai and moses perch.

One of the small-mouth nannies Dad caught went over 4kg, which I thought was impressive for the species, but apart from that not much joy was had. Once the sun came up it was a different story and the fish started chewing hard. Maori cod, tuskfish and redthroat emperor were filling the Esky. I finally managed to land a red around the 7kg mark and Dad boated a nice rosy jobfish. No big standouts from the trip but a great haul of reefies for the freezer.

I’ve been wanting to take my wife for a reef trip for a long time. We can never seem to line up a babysitter for the kids when the weather is good. So what does a good husband do? He takes the entire family! Our youngsters are aged three, eight and 10. They have grown up around fishing and boating but would a quick reef trip to try to get the wife onto some quality be too much? I’m happy to report everything went smoothly and we caught some fish.

Or should I say the wife caught some fish. Amanda went toe to toe with a few angry goldspotted cod before she landed a beautiful goldband jobfish. She knew all about that one. I think her muscles are still aching. On the trip out and back we were able to pull up and let the kids watch the whales playing on the surface. We had a mother and calf come over to check us out and the calf was tail slapping and putting on a show. I couldn’t have hoped for a better day.

We even made it to the Hideaway on Great Keppel Island for lunch and were back at the marina by mid-afternoon. A quality day spent with the family on the water in our piece of paradise and I can’t wait for the next one. I still get reminded who caught all the fish on that trip… regularly.

This month’s Secret Spot Bait & Tackle voucher has been won by Rick Vanarkel. The topic for the comp was best flathead photo. Rick nailed the horse flatty pictured on fly and got a cracker pic of it. Champion effort mate. Rick won a $50 voucher to be used in store. If you would like to be part of our photo of the month comps, then jump on the Fishing Central Queensland or Secret Spot Bait & Tackle Facebook pages. Wait for the next comp to be announced and post a photo – it’s pretty easy.

Last but not least, this month will see the running of the annual WTF Women That Fish Barra Classic. My wife participated last year and had a ball, so she’ll be back again this year for another crack. It’s a top women’s comp and gets bigger and better every year. I’m driving for the wife, so wish us luck. Marriage counselling at its best.

We will also have a report on the King of the Fitzroy thready comp run by the Keppel Bay Sportfishing Club. I was disappointed I couldn’t make this one due to work but with the size of the threadies being captured in the river at the moment I’m sure it will be a cracker. Keep an eye out in upcoming editions for in-depth reports. I hope the weather gods keep smiling and everyone gets out to enjoy our wonderful sport.

Have fun, stay safe and I’ll catch you next month.