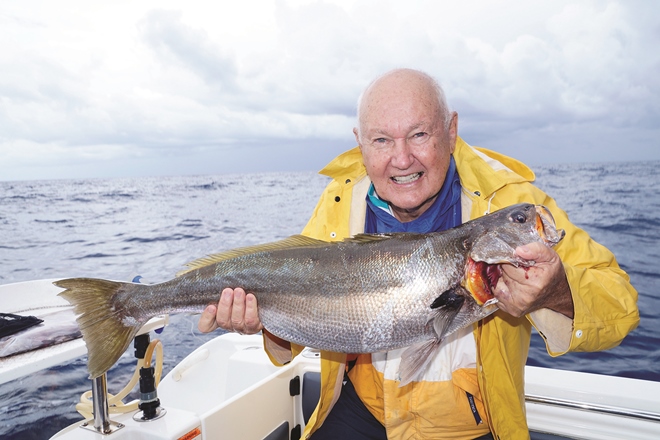 At a stately 80 years of age, Ken Mander Jones was not going to let a dark and stormy background interfere with catching this teraglin.

HOW things can change over a month.

Last edition I was critical (but optimistic) of the slow fishing on the local Brisbane offshore reefs, but since then the fishing has improved considerably, delivering a level of consistency that suggested it has not been a one-off, moon phase dependent thing. Everyone was feeling the pinch for a period and it was broadly spread. A personal observation is this slow-down happens pretty much each year, always sometime after winter but on a random basis, and the fishing comes good again after a period of adjustment.

With the Christmas/New Year period on us, I am happy to share a bit of what has been working well for us offshore in the hope it inspires someone to seek out that fish they have been hoping for. For example, we have seen cracking parrot and pearl perch activity along the 29 and 33-fathom lines, with the broken reefy sections along the eastern ridge of the 29s a favourite late in the year. Float lining this area on the right days has produced quality late-season snapper but nothing really big and frankly better fish of other species have been caught on the paternoster rigs in the same areas. It is very easy to fish paternosters at that depth because they are not subjected to as much current as on the deeper reefs when the weather warms and the current is on.

Fishing the closer grounds is easier than fighting a stronger current out deeper anyway. Working a bit east to the 33s, amberjack have been taken along the northern sections, as have a few teraglin. Their size has been average but they are excellent fun on Wilson Venom spin sticks and to spice things up, we have been using live baits for the better fish.

The bend and power through the Venoms on hook-up has been amazing. The area around Nats Rock and the ledge to the north used to be very reliable in October and November and it was nice to make a rare visit to pull some good fish from the reefs there after a long absence on my part.

At this time of year I like working away from the mainstream Brisbane offshore areas and tend to focus on fishing paternoster rigs for the best results because the main run of snapper fishing has well and truly slowed. A good starting point is the back ledges to the east of the 35s. Here you’ll find a number of ridges and they hold a surprising variety of fish during summer when the current permits. Pearl perch are my favourite fish in this area and I like to spend time idling around in 70-80m to find the bumps holding the most fish, selectively separating the table fish from the bait schools and working them over.

A good example of what can be found in this area is the 62cm pearl perch Luke Steedman caught on a recent trip. This fish was big enough to feed a whole family and those big fat pearlies hit so hard you can easily mistake them for a small amberjack. It came from a flat piece of reef that rose no more than a metre off the bottom, but it was the nice spread of solidly separated red dots on and just off the bottom that showed up on the Garmin medium-frequency CHIRP and got my attention. Rather than a clump of fish as you would see on a single-frequency sounder, the CHIRP really can separate the targets much better and these days I get really excited when I see shows like this, whether in shallow or deep water, as it will be tight lines coming up soon.

The lead-up to the last new moon saw big teraglin and amberjack firing on the 42s and it was good to get into them after they had been missing in action. Live baits were sparse that day, so after burning off those in the live bait tank, we gave the deepwater jigs a good rip through the water column. I still get a buzz watching others hook up with this exciting form of fishing but it requires a good bit of co-ordination and cardio fitness. If the crew gets tired, it is great just being able to lend a hand and defy the odds with a hook-up, handing the rod over to someone who appreciates the opportunity.

On the Brisbane offshore scene, an enthusiastic young bloke, Mat Hubbard, has just bought Moreton Island Fishing Charters from Warwick McLean. Warwick built up a good business with Mat as his occasional skipper and decided to retire, so good luck to you Warwick. Mat has a fresh approach to chartering, with great interpersonal skills, and takes anywhere from six to 12 people on the boat and supplies good-quality outfits, braid for reef fishing, mono for trolling and an excellent deckie with whom to share the workload. Well done Mat and good luck with the venture.

No doubt plenty of people will be heading through the bar over the Christmas/New Year break, so here’s a quick round-up. We had a big swell recently and it presented a good opportunity for a pre-Christmas test of how the channels are holding up. In a nutshell, some very big swells were rolling through that day and I can assure you that the bar just doesn’t hold those swells as easily as it did in the days of the old northern channel. That is history now and some days you will be limited  by your level of knowledge, experience and the capability of your boat to manage ground swells and big summer tides.

The southern channel is very shallow and if there is a run-out tide and a metre and a half or more of easterly or east-northeasterly swell, be very cautious when heading out. The middle channel is much better in those conditions, being deeper, a shorter run to the safety of deeper water and with the scope to manoeuvre when the bigger ones come rolling through. A northern channel past Short Point is holding up well and is also only good for small swell days or a larger southeasterly swell because the waves don’t tend to wrap round the corner too much, but you still need to keep a good eye out.

A big sand island is once again in the middle of the bar. It seems to get bigger each year as we near Christmas due to the build-up of sand from the constant northerlies and general lack of swell in this period, and then it gets gouged out once the big swells start up in the new year. That sand island is presently decorated with a small stranded yacht that has been there a few weeks and is easy to spot from a distance. I’m not sure of its origin but it makes for an interesting talking point.

The channel just to the south of the sand island starts off deep but quickly shallows as the water fans out over the banks and is definitely not a good option when the surf is up. Remember: if in doubt, don’t go out. Whatever you are doing over the break, stay safe and have a merry Christmas and happy New Year.

Bill has been spearfishing, fishing and surfing for all his adult life and now runs a business specialising in teaching people how to cross coastal bars and fish offshore. He also runs charters for people who fish for the right reasons and whose company Bill thinks he will enjoy. He’s been running his bar crossing business successfully since 1996 and hopes to continue doing so for years to come as he grows old disgracefully.
Previous Z-Man ladies fishing shirt
Next Mercury men clean up at ABT Costa BREAM Grand Final