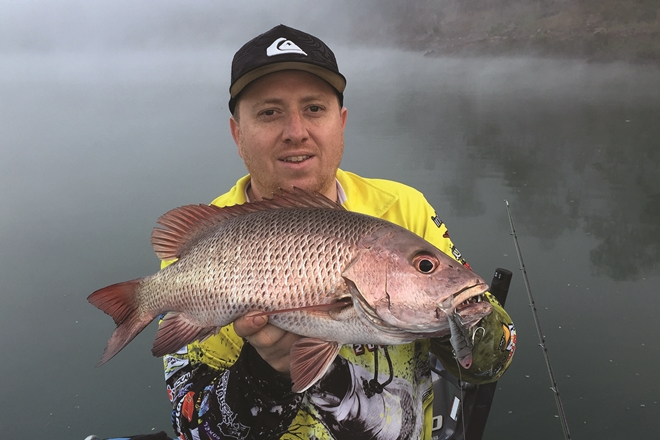 Phil with a nice jack from the Calliope River hooked on a Sakami Vibelicious.

Barra closed season but other species around Gladstone rock bars

THE first day of November is a sad one because the saltwater barra closed season starts with it.

However, the closure is also a good thing because it gives these great fish a chance to breed and their numbers to increase. On the upside, loads of other fish species are there to take their place, and with the increasing temperature, mangrove jack will be high on many people’s lists. Plenty of these fish have been hitting lures meant for barra, particularly around rock bars.

A slight change in size and technique will see your jack strike to catch rate increase. Locations you fish may have to change depending on where you normally chase barra. If you target them in deep open water you will need to look at fishing heavier and shallower structure to get out of their zone. You will need to downsize your lures, with the best sizes for jacks from 75-100mm.

You may need to look at fishing weedless, with standard jig heads getting snagged more often. The new weedless Zerek Fish Trap is hotly anticipated for this reason, allowing you to now fish with a soft vibration bait through a snag without the cost or frustration of snagging and losing lures.

Afternoon and morning surface fishing for these fish is rewarding. You will get fewer strikes but the ones you do are spectacular and visual. Drifting live baits into heavy structure with the tide is an extremely effective way to target jacks.

Make sure you’re ready because the hit from a jack on a live bait close to structure can be vicious. Tight drags, good reflexes and gear and tackle up to the job is needed, otherwise the battle will be over before you get a chance.

Another good option is to use a float and give the live bait enough line to sit just above the snag. If you find live baits are not getting any attention, don’t rule out a fresh cut bait or pilchard because these have saved many a session for me when all else has failed.

Structure you target can be anything from man-made rock walls and pylons to fallen trees and natural rock bars. Typically I would have more luck fishing from natural structure like timber and shallow rock bars, but you can get great-sized fish from deeper locations too. Tackle you use is up to you, with both spinning gear and baitcasters OK. Leader size depends on the structure you’re fishing.

For heavy timber and rock bars, I would recommend fishing slightly heavier. When around mangrove fringes and isolated rock bars you can get away with light lines. Another species found commonly through summer is fingermark. You will encounter the odd fish when fishing structure for jacks. They are more commonly targeted on lures and baits in deeper sections of the rivers and around rock formations in the harbour and nearby islands.

Grunter will still be caught in good numbers on fresh strip baits and live herring or smaller 2.5”-3.5” prawn or fish-imitation plastics. All our systems have gravel bars, which make for the best spot to start chasing them. You will also catch the odd one when looking for fingermark in deeper locations.

Blue salmon will have slowed. You will still be able to find small schools feeding, they just won’t be in the same numbers as in the cooler months. Large schools of tarpon are moving around the systems and some of these fish have been in the mid to high-60cm bracket. At this size they really put up a great fight, with long hard runs and impressive aerial displays. They haven’t been fussy and are taking vibes and plastics, the trouble is staying connected to them with their hard mouths.

Because they have a raspy mouth, they have been wearing through leaders quickly when they grab lures on the drop and take off. The Fitzroy River and Port Alma are good options for threadfin salmon now the barra are a no-go, with large schools and some horse fish moving through the system.

Flathead are still biting well, and expect as we move into the warmer months that larger fish will move into deeper water. Plenty of school-sized fish will be on the flats and edges of sandbanks through the harbour and around the mouths of the creeks and river. Bream will slow during summer, though there will still be enough around for those who want to chase a feed.

Awoonga Dam is firing for barra with the jump in temperature. As the water temperature increases, I would expect the fish to spend more time in deeper water. They will be moving back onto the flats and weed banks to feed during the cooler low-light periods of early morning and late afternoon into the night.

You are likely to come across a few salty barra when targeting the species mentioned but please treat them carefully and release them in the best condition you can to help build future stocks.

Cheers and happy fishing from Gladdy.