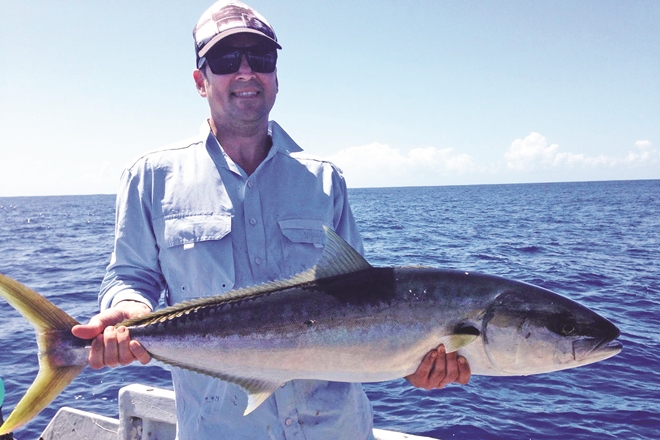 Nathan Mitchell with a 10.2kg kingfish hooked on a floating pillie and 25lb line.

WE’VE had awesome weather of late which has allowed plenty of fishing opportunities.

On the deeper reefs the current has consistently been running at 1.5-2 knots. With the tide running all the way through the water column, it has been pretty fishable out to 50 fathoms but the continental shelf has been hard to impossible to fish depending on the wind. Windarra Banks has seen a few small yellowfin caught on trolled lures but wahoo still haven’t shown. On the reef at Windarra have been amberjack, kingfish, snapper, moses perch and teraglin.

Windarra Banks is a rough old place to try to land a kingfish. Go heavy enough and you’ll catch them but 80lb line is the minimum if you want to feel like you are getting somewhere. Lately I’ve hooked several on 50lb line and may as well have been using cotton. I definitely recommend 80-100lb line out there for kingies.

That is unless your name is Nathan Mitchell. Nathan came out with me recently and we scratched away at a few fish on Windarra Banks. We caught reef fish as well as a squire on a floating bait. A small cobia of 6kg even ate a floating pilchard. The pilchards I was using were pretty second hand because I had defrosted them two or three times previously. Nathan picked up the rod with the floating mushy pilchard for bait when it went off again and it was evident it was a solid fish.

After a big powerful run the fish started slugging it out and I called it for a good jewfish. It took a long time and required a lot of pressure on the 25lb line but Nathan finally got the upper hand and boated a 10.2kg kingfish. That’s a pretty good effort on cobweb string.

As I said, despite the current, the 50-fathom line has been fishable and I have spent a lot of time out there recently.

Some good pearl perch were caught on the new moon in May, so definitely give them a go on the same moon in June if the weather allows. Pearlies really are one of the delicacies of the reef. The 50-fathom line is also holding a lot of squire but they are so small it’s not worth the effort and half of them are undersized anyway.

In a touch closer, I’ve been fishing the 45-fathom reefs wide of Windarra Banks on my way to the 50s each day, and each day I’ve wished I hadn’t. The place has been a desert, however this can change quickly. I’m not sure how the same depth has fished off Cape Byron because I haven’t been down that way.

The 32-fathom line, however, has been fishing really well. The squire there have been bigger than out at the 50s, which is unusual. Parrotfish have been in abundance and a good feed of flathead is available as well. If you fish the more substantial rocks on the 32-fathom line you are likely to get into some trag this month. For those who aren’t aware, a lot of gravel beds are found all along the 32-fathom contour. In spots along this gravel are small pinnacles, and these are where trag, moses perch, pearl perch and better squire hold.

On the gravel you will get a lot of juvenile fish such as pearl perch and squire but also thumping parrotfish and a good feed of flathead. The downside to fishing the 32s of late is the grinners have come in thick. While plenty of decent fish are there, grinners are a pain because they scuff your trace and get in the way of the quality fish. Some are 60cm long and when you first see them you think you’ve got a good flathead before the disappointment sets in.

On our shallow reefs, great catches of squire have been taken, as have a few jew. Mackerel will still be caught this month and we can only pray for a strong finish to what has been a lousy season.

As I write, we haven’t had a cold snap to get the mullet out of the rivers. They are hanging around the lower reaches but will not move around until the weather turns frosty. Still, the jew know they are coming and are waiting off the walls. Some of the big jew have been coming well up the rivers to find the mullet, which has given river fishos a thrill. Great bream are moving into the Brunswick River around the harbour and walls. Fishos have been getting their NSW bag limit of 10 fish in about an hour.

A few mud crabs are getting around after being quiet for a while. This time last year they were thick, so let’s hope for a repeat of that. A number of tailor have been hooked on the beach but we haven’t had a big hit of them and I can’t imagine there will be until we get a solid westerly cold snap. Once the mullet start moving the tailor should come too, but tailor seasons have been pretty average for a few years now. Hopefully that means we are due for a good one.

June is a great month for fishing in this part of the world. I hope you can get out there.