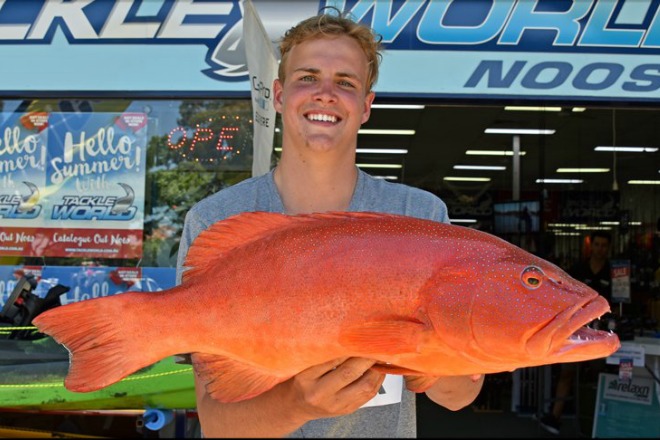 Ash Morgan went bottom bashing on Sunshine Coast and as you can see by the 66cm coral trout he's pictured with, it was a good move. Photo: www.fishingnoosa.com.au

With the wind up and the offshore scene closing down a little on the weekend a lot of angler focused their attention on the river.

Good numbers of mangrove jack have been taken on live baits, paddle tail soft plastics have also been firing the Squidgy Prawn in the 100mm has been a real performer. Peak times have been late in the evening on the hotter days. Live worm and yabby baits have accounted for good numbers of whiting from Gympie Terrace, the dog beach and frying pan. Surface lures like the Bassday Sugapens in the 70mm have been getting the better quality whiting.

Trevally and queenfish have been present in the Woods Bays again surface lures first thing in the morning or soft plastics as the sun get up. Good quality flathead have been coming from the lower reaches of the river. Drifting whole fish baits or live baits has been doing most of the damage. Plastics like the berkley 4” nemesis slowly hopped off the bottom has also proved successful on bagging a big lizard.

For the anglers that did make it outside before the change in the weather last Friday, good numbers of coral trout were taken around the Sunshine Reef area, lightly weighted pilchard baits or livies fished hard on the bottom got the results. The Palm Slow Blatt jigs have been proving their worth on these fish with the oval shape really performing. Squire, snapper and larger pearl perch have been coming from the deeper areas of the Barwon Banks and the Hards. Spotted mackerel schools have still been plentiful throughout Laguna Bay, Letting slugs between 10-30g sink and then pulling them through the schools has proved the best method. Spanish mackerel have also been around the Sunshine and Chardons reefs. Trolled hard bodies like the 180mm Samaki Pacemaker doing most of the damage along with livies on stinger rigs. Floating pilchards and slimies has also proved a successful method.

In the fresh water Yellow belly and bass have been taking plastics fished hard around the weed edges in Lake McDonald. Zman slim swimz and Keitech easy shiners in the 3” size have proved successful.

Davo’s are running a MACKEREL MANIA COMPETITION during January. With the spotted mackerel coming on the bite you’ll have the chance to win a $500.00 gift voucher! To be eligible, bring in your best spotted mackerel to be weighed, measured and photographed.
There will be points awarded for length, weight and condition of the catch and bonus points for best smile and best story. The winner will be decided on January 31 and announced as soon as possible after that date. Both Davo’s stores (Noosa and Marcoola) will be accepting entries.

Now for all the latest information log onto www.fishingnoosa.com.au for up to date bar and fishing reports and don’t forget to drop into Davo’s Tackle world Noosa or Davo’s Northshore Bait & Tackle at Marcoola to find out where the fish are biting, and remember Tight Lines and Bent Spines!
It's only fair to share...

Unfortunately, due to the current COVID-19 situation our Fishing Report for this week is based …