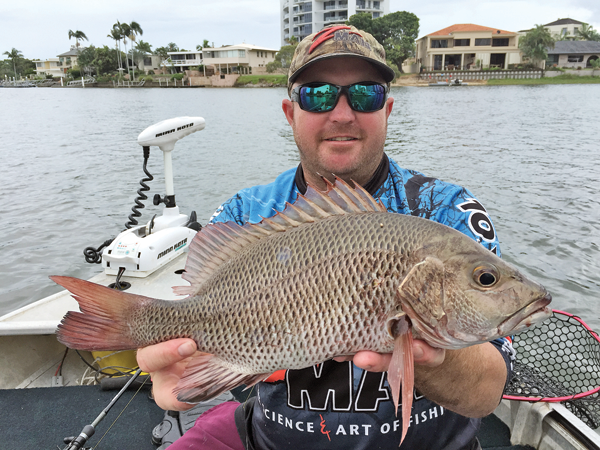 Tips for late-season jew and threadfin

MAY offers anglers an excellent list of options in southeast Queensland.  Plenty of crustaceans will be available, along with a wide variety of fish.  This month should see a run of really pleasant weather, which will open the options right up.

Last season was an absolute cracker for prawns around the north Brisbane area, but this year it has been interrupted by heavy rain, which has caused a lot of the systems that fired during April/May last season to be comparatively slow.  Anglers who have kept their options and ears open have still been enjoying plenty of prawn cutlets.

Most dedicated prawners keep to themselves and are very wary about giving out information to anyone other than their closest mates. These guys put in the hard yards and spend heaps of time on the water chasing prawns. Social media can be a good way to hear of prawn activity.  Some people are happy to post photos and locations of where they found them as well as the tides.

If they don’t give up the location, someone else will no doubt identify the mangroves in the background and let everyone else know where it is. I think most prawners who regularly get results will agree that the last half of a falling tide through to the first two hours of the run-in tide are consistently the best.

The run-out tide gives the prawns less water to hide in and forces them into the deeper holes as the tide bottoms out, especially in smaller creeks. As the tide rises, the prawns spread out and move up into the mangroves to get away from predators. This applies to larger rivers as well, but they seem to school up for longer in the deep holes in big rivers before spreading out.

May is often regarded as the end of the prawn run in the southeast Queensland rivers, but it can go for a couple more months depending on the season. For example, I was still getting big numbers of prawns in July and early August last year.

The huge numbers of jew and threadfin salmon that have been hanging around the mouth of the Brisbane River for the past few months should start to disperse in May. As the water cools, both species like to head upriver and feed hard.

Plenty of fish will remain around the mouth, but big schools will be harder to find. All the systems that run off northern Moreton Bay have good populations of jewies and threadfin. The larger rivers with deep holes and good rock bars will hold a lot more fish than the shallower sandy systems.

Targeting these fish can be a bit hit and miss during May because the water temperatures are still dropping but it’s definitely worth the effort. I’ve caught loads of ripper jewies during May, with some sessions producing multiple fish.

Threadfin seem to take a bit longer to fire, but they won’t be far away.  Jew and threadfin show up very well on sounders that detect what’s happening out either side of the boat. The most common areas to find these fish are in the deep holes on the bends of the rivers or around rock bars.

Both locations hold large quantities of bait and attract all kinds of predators.  My favourite way to target them is to cast soft plastics into the schools of fish. Most of the fish will feed close to bottom, especially during daylight hours.

When rigging your favourite plastics, make sure you choose a jig head that will get to the bottom.  Many of these holes are quite deep and receive a fair bit of current flow. The most common jig weight I use is 3/8oz.

In shallower water I tie on a 1/4oz jig head and occasionally step it up to a 1/2oz in the deepest areas. A standard double-hop retrieve gets the bites on most days, but don’t be afraid to mix it up.

I’ve caught plenty of jewies while the lure has been sitting on the bottom for a while. It’s a fairly boring way to fish, but it gets a lot of attention. Small lures get heaps of bites from big fish, with the Z-Man 3” MinnowZ a personal favourite.

These little plastics catch just about anything with fins. Colour can make a difference on tough days. I’ve seen Electric Chicken out-fish everything on the boat way too many times for it to be a coincidence, so this is always one of the first colours I try.

Natural colours also work really well, with Houdini and Rootbeer/Gold a couple of colours with runs on the board. If the fish are hungry they won’t turn much down, so it’s just a matter of presenting the lure close to the fish.

Soft vibes are a very popular option these days. There are plenty to choose from but I prefer to stick to the better-known brands such as Jackall and Threadybuster. These lures offer a good way of covering a lot of ground due to their heavy weights. They also work well when jigged vertically in deep water.

Plenty of jacks will still be chewing but they’ll definitely be slowing down towards the end of the month. It can take a lot of casts to get a bite at this time of year, but if you get the right conditions the action can be quite good. Get out and enjoy the last month of autumn.

I hope to see you on the water.