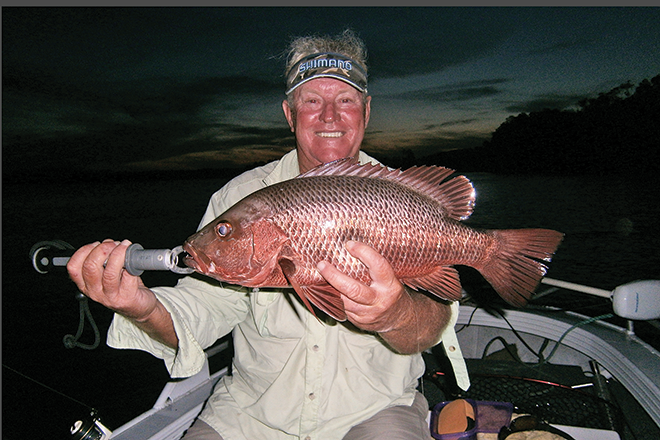 The author with a big jack caught while deep trolling at night.

G’DAY everyone, in this month’s article I will offer you a few tips for chasing the hard-fighting mangrove jack.

January and February have always been my favourite months to target jacks because they tend to school up and feed more freely before the cooler winter period arrives. Unlike some of the systems in the far north of the country, the Gold Coast and Tweed River systems do not hold plague proportions of jacks, but it is believed the small concentrations of fish in our area hold a number of the largest-sized fish in the country.

This is of course great news for us anglers given the aggressive fighting capabilities of these big fish, but it also means we have to work a lot harder to catch them. Let’s first discuss some of the best places and times to target these fish because proper planning is a must for any chance of success.

Heavy structure such as rock retaining walls, trees that have fallen into the water, bridges, natural rock bars and jetties all prove great homes for mangrove jack to find cover and ambush their prey. Once you have found your chosen spots, the next consideration is the times and tides to fish.

I have always tried to plan my trips around the tide changes, either from high to low or low to high, during the grey light periods and at night. By grey light periods I mean either as the sun is rising in the morning or even better in the last hour of the day at dusk, which I call the fruit bat period because that’s when they start flying around.

One of my regular clients once said to me: “Isn’t it funny how you tend to tighten up the grip on your rod as you see the first bats flying around.” This is a fair comment considering the number of strikes you get during this period. The next step is being lucky enough to have one of those stinking hot balmy days that we get in summer when you could almost cut the air with a knife because it is that humid and late-afternoon storms are building up to the west.

Having the right equipment is another very important part of the preparation because finding these fish is one thing but stopping them from busting you up in the snags is another. And trust me, if they can find a way, they will. I know a few anglers fish quite lightly for jacks and have good success but I tend to play the percentages and fish a bit heavier.

However, at times I still get destroyed by them. My lightest outfit is a 6-8kg spin rod loaded with 20lb braid, which I use for casting lures. My next outfit is a 6-8kg spin setup filled with 30lb braid for live baiting. Rounding out my equipment are a couple of 8-10kg baitcaster combos, one with 30lb braid and the other with 50lb, which I use for trolling deep-diving minnows.

Once again I fish heavy and use high-quality Toray braid and leader materials that are shock and abrasion resistant, with the lightest being 30lb and the heaviest 50lb for trolling. OK, so now we are ready to hit the water let’s have a look at some of the techniques you can try for jacks.

I love trolling deep-diving minnows because you get the opportunity to cover a lot of ground and the big deep-diving minnows seem to have a way of finding the XOS fish. The shallowest water I troll my deep divers in is about 4m, with most of my work occurring in the 6-10m range.

Some of my favourite models are my own Digga lures that I have been making for years as well as Sebile Koolie Minnows, RMG 125 Crazy Deeps that plunge to 8m, Pontoon 21s and Atomic 85 and 95 Double Deeps. The key to success when trolling deep divers is to have your lures running close to the bottom, or even better, to have them occasionally crashing into the rocky structure.

This can result in a lot of snag-ups and at times lost lures, but my old saying is “no guts, no glory” because you have to keep close to the structure and play Russian roulette with the craggy areas that jacks call home. Live baiting is probably the easiest way to fish for jacks.

It can be a very rewarding technique after taking the time to anchor up correctly and ensure you are in a good spot to be able to properly position your lives. Some of the best live baits for the job include poddy mullet, whiting as long as they are of legal length, and to a lesser degree herring, which aren’t as good because they are frail, die easily and at times the bream seem to pick the guts out of them.

Live garfish are another good choice and you could also try introducing a few quality cut baits to the water. Strips of tuna, mullet and tailor are on the jacks’ menu. Soft plastics are an option for targeting jacks and they are very versatile due to the fact they can be jigged vertically around deep structure or cast to the bank and worked along the bottom with a slow rolling action.

Casting to different forms of structure along the banks is very popular and rewarding because this is a really hands-on thinking game and works well when using plastics and hard-bodied diving minnows. Just be prepared to put in multiple well-aimed casts.
Casting surface poppers and stickbaits for jacks has become hugely popular in recent years.

The visual aspect of a big jack hammering the lure off the top is the ultimate reward. Accurate casting is required for optimum results and I have found that surface lures worked close to and parallel to rock walls are the way to go because the lure is kept in the strike zone for a longer period.

Well that’s a little round-up on how to target a species that could in many ways be described as the holy grail of our local waterways. As such, mangrove jack should be treated with respect in the form of catch and release management or only taking one for a feed.

As with all species, we have to fish for the future.
To the Bush ‘n Beach team, all my sponsors and you the valued reader, I wish you a very happy New Year.

Smithy has been working as a full-time professional fishing guide for over 20 years, which makes him southeast Queensland’s and northern NSW’s longest-serving guide. Above all the commitments Smithy has in the charter industry, his overriding passion has always been to pass on his specialist experience to anglers and teach people of all ages and angling abilities the correct techniques required to catch all the Gold Coast’s estuary species on a variety of different lures. Smithy’s unique charter operations guarantees you will catch fish on lures or you don’t pay.
Previous E Z Throw Cast Net for Kids and Kayakers
Next Kayaking for Yellowbelly on Lake Cooby