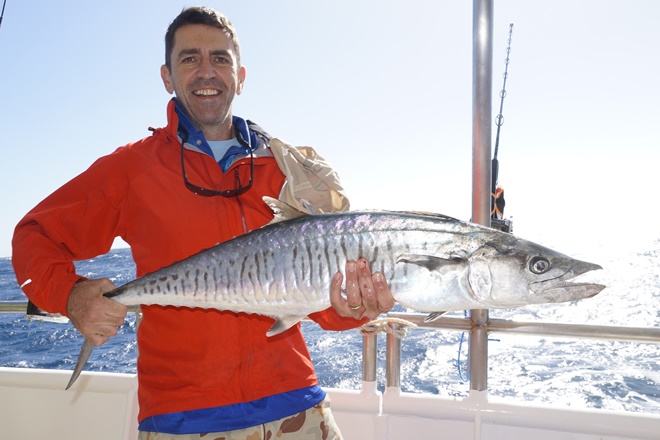 Dan Howard was pretty happy with this typical spanish mackerel caught trolling from the stern between drifts.

AN invitation to join a Swain Reefs fishing trip is pretty hard to knock back, and to do a trip with essentially the same nucleus of guys from previous years that all get on well and love their fishing makes it even harder.

We headed out from Yeppoon late in the evening on the Capricorn Star with owner/skipper Scott Wilson and his deckies Gav and Brad as well as an enthusiastic young lad Dakota, who was along for work experience during his school holidays.

Scotty takes us well up into the Swains and that is one of the advantages of departing with a head start from Yeppoon. We saw one boat well to the west on the first morning out, but as the week progressed Scotty pushed on well away from where charter and trout boats might be operating and we had the place to ourselves.

The first morning it was the customary “Brekky’s on” call at first light after a big night of steaming. With the dories in the water, Scotty briefed the dory skippers with a very accurate assessment of the lay of the land and in no time we were all into fish on the calmest day of the trip.

Tangles couldn’t make it this year, so George and I had the pleasure of Graeme Kime in the dory for the week, and what great company he was, with plenty of stories of life on the farm out the back of Rockhampton and his journey in life. Graeme got into the groove of our drill in the dory in no time.

Working the edge of the bommies near any of the pressure points, he was pretty happy with the quality of lipper (redthroat emperor) and coral trout taking our unweighted offerings. After fishing the deeper reef waters at home, it is a good feeling playing the cat and mouse game watching the slack line on the surface peel off as a big lipper or hungry trout grabs the bait and runs hard. A quick flick of the bail arm and it was game on, or in George’s case, feed the handline and wait for the feel of the fish mouthing the bait and suddenly stripping line.

It was a good day of fishing with an even better report card delivered by deckie Brad Watts at the end of the day over a hot dinner with all the cleaning done, dories back on board and species tallied, filleted, bagged with fish ID and snap frozen.

It really is a slick operation. The meals in the saloon and regular treats of hot nibblies and the best desserts were a great tonic all week. Some of the boys are right into their bottles of red and some pretty good wines were being passed around for sampling all week at dinner time.

We were off to a good start to our Swain Reefs fishing adventure, yes, but we were braced for tomorrow’s weather: a 30-knot southerly change. We usually get lots more fish working the dories and making our own luck than lined up along the deck of the Cap Star.

Thank goodness she still has a comfortable ride and is an excellent boat to fish from, even in a big sea. Well it started blowing about 3am and kept picking up, so we did the mother boat thing and surprisingly, the fish were really biting and the taxman wasn’t tuned in yet.

The largest fish of the trip, a ripping sailfish, came from a trolled lure in between reefs that morning and we were all envious of the lucky angler Ivan Mapp as he struggled to bring this fish to the back of the boat. Good communication between Gav the master deckie and the skipper up in the wheelhouse eventually saw the sailfish at the transom where it was brought aboard, much to Ivan’s relief, and quickly photographed and successfully released. The fish were really on the chew that day with the barometer sky high, and a very good catch was supplemented by a bonus in the form of Dan Howard’s spanish mackerel.

The next day saw the wind ease back to about 20 knots, so we fished the mother boat and yeah, Ivan did it again with a cracking early morning red emperor. The fish flowed pretty freely for a while and then the taxman made his presence felt, with sharks becoming a bit of a problem, necessitating a few moves to get away from them. I got lucky and landed a little cobia without the sharks becoming aware, and while it was being photographed George nailed another one.

Night fishing on the back deck was a game of ‘beat the shark’. Ron Roduner managed a big spangled emperor from under their noses one night but mostly it was a story of good fish lost without much to show for the effort. With lighter winds for the rest of the week, we were back to dory fishing and enjoyed spirited competition for the fish of the day, with a species nominated daily and a small pot of money up for grabs.

Graeme liked the no sinker caper while fishing the shallows, so after nailing some nice fish, including his first cobia, we headed right up inside the lagoon one morning, taking careful note of the route for the escape later. Scotty’s advice was to get out of there on the dropping tide once we saw rocks appearing around the surrounding reef edge, because if we got locked in with the tide dropping we would be in strife on numerous counts.

We took a hit for the team and went up into the most picturesque lagoon we had ever seen, nailing ripping trout and a decent spangled while anchored on one bommie and casting back to a series of others behind us. It was a good lively session with hussar competing with the target species and we regretted not having gone in earlier.

Common sense won the day and we didn’t stay too long. Many better fish than what we were catching were taken on the other dories, such as John McNicol’s big lippers and trout, Ron Roduner’s green jobfish and Derek Greenough’s red emperor.

Of special note was Bob Graham’s first spaniard. Even young Dakota got a decent trout when there was a vacant dory spot one afternoon, and that was a bit of karma because he was a very hard-working and well-behaved young man who got on well with everyone. The best fish taken on the dories was Drew Wither’s ripping spaniard that Scotty and his crew estimated to be 35kg. Fishing a livie under a balloon a mack that big couldn’t resist, pandemonium ensued during the fight to get the fish alongside.

Then the real fun began as somehow in all the excitement the gaff got placed a bit far down the fish and it was a struggle to get a fish of that size and configuration on board. Well, three big boys trying to get an unco-operative fish into a dory without flipping over was quite a spectacle and it went on for a while, but they did it. In fact, Drew came home with a wet sail and was flying high after a slow start.

With his spaniard, other large trout and some catch of the day prize wins, he redeemed himself after his photo bombing antics from earlier in the week. The ‘photo bomber’ nickname came from his penchant for picking up other people’s fish for a photo and was made worse by slipping one of those large useless oversize blue soft plastic tails into the mouth of the fish being photographed, with the implication he caught it while using the plastic.

He was actually very good at taking selfies with my SLR camera and everyone willingly participated in the fun and games. It was all done in jest and kept us amused for several days.

Again karma struck as it was a bit bumpy on the night trip home and to the best of my knowledge only the photo bomber got seasick. The risk now, after revealing the photo bomber’s antics, is that I may not be invited back again.

Regardless, it is a great week out on the Swains, providing you share the time with a fun-loving crew who are keen to work together and you are on a well-run vessel with an experienced skipper and well-drilled crew.

We all ended up with a great feed of fillets for the week of excellent Swain Reefs fishing and everyone made it home without incident.

Bill has been spearfishing, fishing and surfing for all his adult life and now runs a business specialising in teaching people how to cross coastal bars and fish offshore. He also runs charters for people who fish for the right reasons and whose company Bill thinks he will enjoy. He’s been running his bar crossing business successfully since 1996 and hopes to continue doing so for years to come as he grows old disgracefully.
Previous Fishing from canoes
Next Materials are not materials when it comes to boat insurance