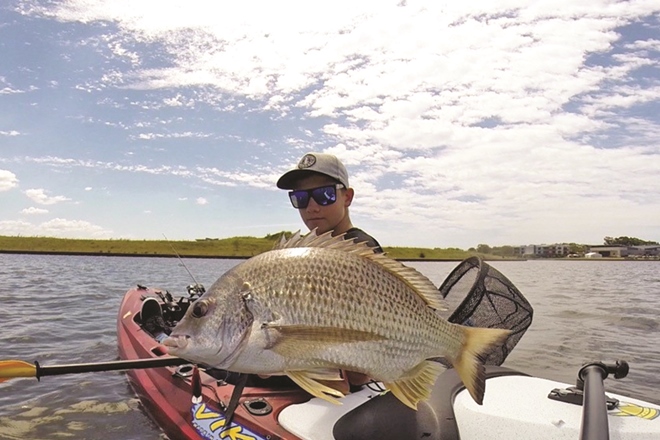 MY name is Jack O’Brien and I am a young and passionate angler based on the Sunshine Coast.

I love spending time on the water, exploring and taking on new adventures. When it gets to the weekend I spend most of my time kayaking in coastal waterways including canals and rivers. Fishing from a kayak is not only fun, it also gives you the advantage of being able to get into those untouched or otherwise inaccessible areas. I enjoy kayaking partly because while exploring new fishing country I can readily learn new techniques to help target different species.

Canal fishing
I regularly fish the canals in my Viking Kayaks Profish GT. The canal systems can produce unbelievable fishing on a number of species.
Retaining walls along the canals often provide great structure with the rock bedding that follows the walls holding a lot of bait, and wherever there is bait, there is most likely fish. Any pontoon, retaining wall or rock bed is most likely going to have a bream hanging off it. If not just one bream, potentially a few.

A good technique when fishing retaining walls is to use a hard-body with a slow retrieve, getting the diver to disturb the bottom and create a vibration to attract nearby fish. I employ a slow retrieve so I can feel every little bump through the rod tip. The bream will normally sit along the rock bed, follow the lure out and smack it. My lures of choice are small 2”-3” divers.

It’s always a good idea to take note of what bait is getting around the system at the time so you can match the hatch. If I’m not throwing hard-bodies, I’ll be casting my favourite plastics made by Australian legend Brett from Bash Lures. These handmade lures are designed for Australian species and my all-round ultimate plastic is the Ribbon Tail. This lure has an incredibly realistic action and can be deadly when rigged on a light 1/12oz TT jig head and cast along the face of retaining walls. The lighter the jig head, the more natural the plastic will look, resulting in more hook-ups and more fish. Using this lure and technique I have caught bream, whiting, trevally, flathead and mangrove jack, all in 2-4m of water.

I have found the best time to fish the systems is on the incoming tide, during early morning or late afternoon. Surface fishing is a great option at these times. Often I have been out in the kayak and seen fish hitting the surface while herding bait. In these situations, throw topwater lures or plastics and use a fast retrieve to get the fish excited. I run fairly light gear for this type of fishing, consisting of a Shimano 2-4kg rod, Shimano Sustain 2500 reel, 8lb braid and 10lb leader.

Another kayak fishing option is targeting rivers or tight water. Nothing is better than taking the kayak to a new spot and exploring a narrow, untouched waterway. Viking’s Profish GT kayak is designed for anglers looking for a versatile, compact and easily managed setup. The Tackle Pod in the middle of the Viking is an angler’s dream and allows you to pack away tackle boxes, lunches and accessories. The Chill Pod on the back is also perfect for fishers who like keeping fish for a feed. Alternatively, you can use it as an additional storage space for your gear.

In my Tackle Pod I run a 12V battery that powers a Lowrance Elite-3x fishfinder, which is a very effective setup. Like the canals, fishing the rivers the early mornings and late afternoons on an incoming tide has produced the best action. In the rivers I tend to use slightly bigger lures than in the canals due to larger specimens lurking around. During a recent early morning session I was fishing a river with a 3” soft plastic, which resulted in a catch of two healthy jewfish. I had spotted some arches on the sounder while paddling around in the kayak, so I knew jewfish were in the area. I cast the 3” plastic, let it sink to the bottom and began retrieving with a hop-hop method when all of a sudden the fish hit the lure like a steam train.

It started to tow me around in the kayak, which was good fun. I knew it was the fish I was waiting for, so turned on the GoPro that is attached to the back of my Chill Pod via a Railblaza TelePole and continued fighting the fish. After landing this fish and snapping a few shots I managed to catch another one. Both jewfish were released.

On a final note – when it comes to kayak fishing, I recommend bringing a first-aid kit, plenty of water and a bite to eat. I also strongly believe in wearing a PFD for your own safety. Please check out my website (www.flickstrikefishing.com), Facebook page (www.facebook.com/flickstrikefishing) and Instagram (jack_mate99).