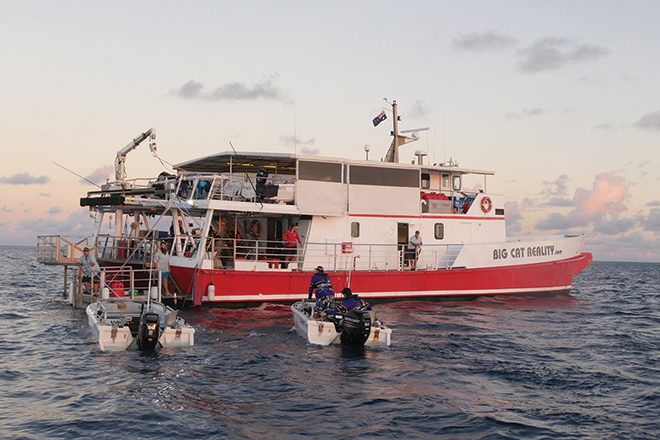 The author’s home away from home, a 25m cat with air-conditioned bunker rooms, multiple dining areas and a massive rear and top deck.

Sojourn to the Swains – part three 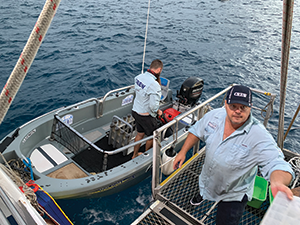 THIS is the final piece of my three-part series on an epic Swain Reefs fishing trip.

If you have missed either of the first two parts, you can find free digital copies of the articles at issuu.com/bnbfishing

To give you a brief rundown on the adventure so far, Wilson Fishing compiled a motley crew to test some of their awesome fishing gear.
Topics covered to date include a break down on all the rods, lures, fish and everything in between. For this final script I’m covering my favourite fishing technique, what is was really like on Big Cat Reality Charters and a bit of karma.

As this was my first trip to the Swains, I was of the opinion that the very remote places we planned to fish would consist of the fish just jumping on the hooks with little or no effort. While that can sometimes be the case, often you still need to work out the best technique for that location at the time.

Interestingly enough, when we finally reached the northernmost point of the trip, which was also the most remote (we were actually east of Mackay, a long way north of the harbour at Bundaberg where we departed), we discovered the fishing wasn’t actually as good as some of the areas we had previously fished.

Odd you might say, which is what I thought as well, but we soon discovered after the crew did a bit of free diving that the reef appeared to have been damaged from either severe storms or cyclones. However, one of the beauties of this trip was the freedom to move about, so it was back to some hot fishing spots we discovered on the way north.

Fishing techniques obviously depend on what fish is being targeted, and while the aim of nailing plenty of ‘red’ fish was part of the mission, Sean (Tiny) and I seemed to have an overriding magnetism to the more silver fish, specifically some brute GTs. In order to hook one of these fish that patrolled the various bommies and reef edges you needed to ideally find bait.

Finding bait can be as simple as seeing it spray out of the water as a large predator chased it or sounding it up with your sounder.
Interestingly, a lot of the baitfish were small, but this didn’t seem to deter the GTs, which we found ready to ambush a well-presented topwater lure cast to the edge of frightened baitfish.

The plan to catch these drag-pulling monsters, after we located bait and had current pushing against an edge of some sort, was to fan-cast both stickbaits and large poppers. As it turned out, the stickbaits were by far the best choice, with the Zerek Zappelin doing all the damage over the 10 days.

That’s right, zero GTs on poppers. I’m not entirely sure why this was the case, but it may have been due to the fact the stickbaits allowed a larger variety of retrieves. They could be worked anywhere from very slow with extended pauses to a fast twitch across the surface.
Both techniques scored fish, so it’s safe to say it is important to mix up your retrieves to find out what is working best.

It is also good to work in tandem with your fishing partner so you can cover the most ground and both get casts away in ‘prime’ spots.
However, the old ‘hail Mary’ to the wider grounds also produced fish. This went against the trend, but these fish were easier to land because they were further from the structure.

When chasing the monsters, it is also important to have the right gear, which I have covered previously, but what I haven’t talked about is how much drag to run. Basically, a lot. The ATC reels were pretty much wound up to full drag (‘sunset’ is the technical term) so you could barely pull any drag off with your hand.

This might seem like a lot, but it was amazing how fast some of the bigger fish could rip the line off the reel, even with that amount of drag. This is where it is extremely important to have a well-designed rod, because it makes trying to control these fish much easier. The weapons of choice were the Venom GT Popper (I used the PE8, which was ideal for me).

Not too strong to make fighting the fish hard, but stiff enough to turn their massive heads away from the reef. Something else we did when one person hooked up was to get the other lure in and jump on the engine in case we had to pull the fish away from the reef or get the boat in a better position.

Doing this can be the difference between landing and losing one of these fish because they can easily drag around the tenders. It is worth noting that even though we did bring a few fish on board for photos, all the GTs were released and all swam away strongly. Apart for the initial strike, when you see these monsters come out of the water and smash a lure, watching them swim off gracefully is just as exciting and even a little more rewarding.

For what was initially a dive charter boat, the Big Cat Reality Charters team has turned this vessel into an awesome extended fishing charter boat. Everything about the operation is done with complete professionalism from all the crew and captain. However I, or more so my wife, was not very happy with Jeff the chef because I put on about 4kg in 10 days.

But the food was unreal, and we ate like kings, so a little extra weight was to be expected. Who can say no to char-grilled coral trout wings and a Stone’s Ginger Beer after a long day fishing on the tender, and this or some other delicacy is what we came home to each day before we settled into our actual dinner.

The hospitality didn’t stop there because all the crew and James the skipper were happy to pass on plenty of tips and tricks for maximising our trip both on and off the water. In terms of fishing vessels, they were 4.1m SmartWave boats with 50hp Mercury tiller steers that had been specifically set up for the mix of fishing you will encounter.

While 4.1m doesn’t seem big, they were deep-sided boats and had lots of lean rails to assist when fishing a big fish. All tenders were fitted with quality Garmin electronics that you were fully briefed on how to use. However, if you want, you can bring your own boat on the trip, which is what the Wilson Fishing boys did.

This is awesome because you can bring along a bigger boat you are familiar with. Overall, I couldn’t fault the team and I felt a little spoilt because all our gear was loaded by the crew into the tender each day, our fish were cleaned and Cryovacced, boats washed daily and many more things, leaving plenty of time to rehydrate and chat with new mates.

It is worth noting you do drive the tenders yourself, but that is all part of the adventure and it allows you to pick and choose what sort of fishing you want to do. If you are after a charter trip of a lifetime, I can highly recommend Big Cat Reality Charters. For more information on trip destinations, dates, cost and more, check out bigcatreality.com You won’t be disappointed.

There are several people I’d like to thank who enabled me to go on this trip of a lifetime. First, I’d like to thank the team at Wilson Fishing. It was an honour to get the call-up and I relished the chance to test some new gear. I already have and use plenty of their gear, but it was good to try some stuff I wouldn’t normally put in my stable.

Thanks also goes to the team at Big Cat Reality Charters. You guys made this trip ultra-enjoyable and it was an absolute pleasure to be aboard the boat. Thanks must also go to Principal Scot Steinhardt at Victoria Point Hight School (where I’m currently on a contract as well as doing the mags) for approving my extended leave – much appreciated. And finally, thanks to my wife for looking after the kids while I was away ‘working’. Somehow, she doesn’t see the funny side of this statement.

I thought I’d leave this to last, but karma did strike while away on the trip. After giving fellow scribe Greg Lamprecht a sneaky cheap shot in my editorial before I left about losing a rod on his trip aboard Big Cat, I too managed to throw a very nice Venom rod over the side of the boat first cast one morning.

After it had slipped from my grip, I yelled to Tiny that I was jumping in, but he said he had it… as it disappeared out of reach in an instant and sank to the bottom. Disbelief set in and I immediately thought back to my dig at Greg as I pondered what to do next.
Should we call it in, knowing full well I was going to cop it big time from the guys for the rest of the trip, or just cry silently and not mention it?

Well, I bit the bullet and Tiny called it in over the radio to see if one of the crew could free dive and retrieve the rod. Fortunately, we marked the spot on the GPS, so had a good idea of where it was, but as the sun was low in the sky and there was a bit of cloud cover, we couldn’t see the rod, despite doing a few runs back and forth over the mark.

Unbeknownst to me, JC was at the ready and somehow managed to record most of the conversation between the tender and the mother ship, so there was undisputable evidence of the mishap. With my head hung in shame, we continued to fish for a while as the mother ship made its way up the coast so a couple of the boys could bring a spare tender out to try to get the rod.

Thankfully, we managed to find the rod and reel on our return to the spot. Unfortunately, this took a little while and with the tide rising all the time, the original depth of around 10m soon increased to 15m, which was getting on the free dive limit of the crew. After Aaron’s initial attempts to hook it with a makeshift grapple failed, Gary called it and said he would dive.

Kitted up with weight belt, fins and a camo suit, he set off for the bottom. After what seemed like a fair while (and probably seemed even longer for Gary), the surface of the water was finally broken and the silence broken as the tip of the Venom was slowly raised towards the sky to cheers of joy.

Relief set in as Gary took a few deeps breaths and explained that a good trout was sitting just next to it.
How do you beat that!?