The last week of the school holidays provided anglers with some fantastic early morning conditions with the local reefs enjoying the NW winds which then swung around to the east making things a bit more bumpy. We did see a few of the bigger boats head wider to the Hards and the Banks, but reports were limited to catches of smaller snapper, pearl perch, sweetlip, cobia and the occasional dusting from a big AJ. Pilchard and mullet baits dropped down on paternoster rigs working well along with squid and pilchard combo baits also working well. Pilchard floaters picked up some mid water cobia.

Closer to home sunshine was a little quieter following the previous week’s new moon and again we saw smaller snapper, sweetlip, tuskies and pearl perch. There have been multiple reports of bite offs which mean the spanish are still about and will probably continue to stay. The warm waters and lack of significant rainfall should see these fish becoming more and more active as we push toward the full moon next week. For those wanting to find one it would be a great idea to stay in closer along the halls reef section and troll whole garfish, sauri or bonito baits on pre made troll rigs. The ideal speed is around 3-6 knots and a bit of swell is great as it causes your boat to change its speed without backing the boat into and out of gear while underway.

If you do hook up you can also expect to find big lone tuna and cobia so if you do hook up expect it to be BIG! Try a wire free rig first then switch to wire if you are getting repeated bust offs.

Surf fishing continues to provide light surf anglers all along the coastline with bream, dart and whiting staying in the clearer warmer waters. Lightly weighted worm and mullet baits proving the better option. Around the river mouths of the Noosa and Maroochy you could also find bigger breeding sized flathead during the run out tides sitting along the drop offs.

Off the ocean and inside the river the lower estuary is featuring whiting, bream, flathead, mangrove jack and trevally. All of these fish will take a wide range of baits and lures. Baits for the smaller whiting should be fresh beach worm, peeled prawn or squid strips/legs. If after trevally, bream and flathead then larger pilchard, mullet and prawn baits work well. If you have a cast net then getting a few herring or small mullet work very well for all the bigger species, especially during busier times on the water.

Fishing after dark is also a great time to find a few bigger fish as they will hunt under the cover of night. Take a look around the river mouth sand bars, downed trees along the dog beach and around Munna Bridge if land based. For those in boats or kayaks then the frying pan, sand flats along Gympie Terrace and around the marina are other great spots. Up toward the first lake and beyond you can expect to find flatties and some smaller school sized jewfish. These fish are taking smaller plastics in the 4 inch size range as well as bigger prawn and pilchard baits. If wanting to throw a lure take a look at the larger Zerek Tango Shad. These are consistent producers of bigger fish in deeper waters.

The freshwater saw a big bite window last week which continued into the early part of this week. Saratoga have been active at Borumba and have been caught on suspending lures like the Rapala jack deep. This little lure gets down deep and is perfect for crash diving down to the fish fast. Let it sit and wait before bringing it to life again. Bass are still hiding along the edges of both Borumba and Lake MacDonald so spinnerbaits and heavily weighted plastics cast close to the edge and worked back can trigger an aggressive bite. In deeper water Jackson iga jig tail spinners are a great option as are hot bite gang bangers twitched and slow rolled through schooled up fish. 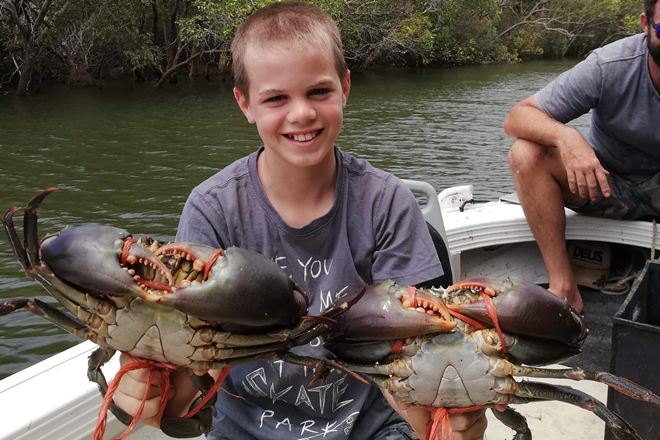