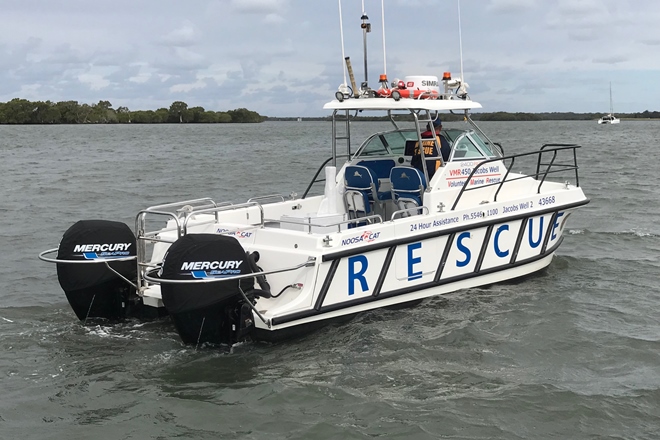 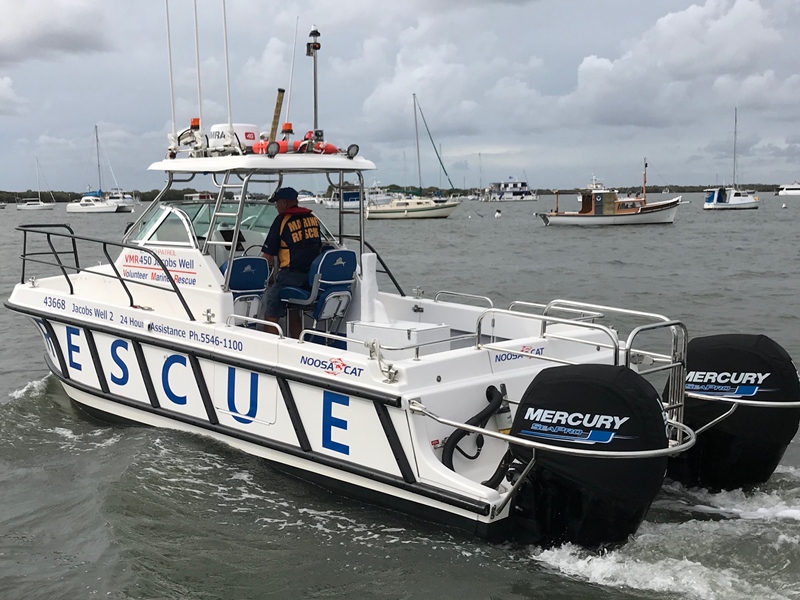 There were two rescues and I was driving for one of them; a boat got overturned on an outgoing tide and another went belly up on the bar on the incoming tide. This new boat is marvellous and combined with the SeaPro engines it is a dream to operate.”

In a rescue situation, especially in the chaotic conditions that exist on Jumpinpin Bar, instant power is necessary to ensure the boat is exactly where it needs to be, and that is what the SeaPros provide. The boat is no lightweight, tipping the scales at more than 2.5 tonnes and is rated for up to six people. However, when combined with three-blade, 15” Enertia props, the two 150hp Mercury SeaPros can make it jump with a top speed of 61km/h at 5300rpm and optimal cruising speed of 40km/h at 3500rpm using just 40 litres of fuel an hour combined.

“It’s a very, very well-balanced boat and the SeaPros deliver excellent torque,” John said. “We’re often towing boats we’ve rescued and that torque means we get out of the hole very quickly and away from danger. We also need a lot of power to outrun waves, which even after years of experience around this bar really gets your adrenalin up. You have to be at the top of your game and you need the best equipment.”

The new 6.8m Noosa Cat, designed and built to the squadron’s specific requirements, is the organisation’s third boat – and it’s needed. Jacobs Well VMR, established almost 40 years ago, is the second-busiest squadron in Queensland, with its 86 working crew filling rosters 24/7. Mercury SeaPro commercial outboards are engineered to be ultra-tough working partners – engines that work as hard as the people who use them – so they are ideal for VMR Jacobs Well. The new boat literally lives in the water due to the squadron’s workload and lack of space.

It’s a rare break when the Mercury SeaPros are serviced. “We work with Brisbane Marine and the team has been brilliant in helping keep us on the water,” John said. “Recently we had a propeller break and the team members snapped into action. Two hours later they had a new prop fitted and we were back on the water keeping people safe. The support we get from Brisbane Marine and Mercury has been fantastic.”

With new SeaPros on the back of the squadron’s new Noosa Cat, all the crew at Jacobs Well feel that much more capable and safer around Jumpinpin Bar. “What some people forget is the equipment we select isn’t just about rescuing others – it keeps us alive as well,” John said. “Having the best engines doesn’t just save other boaters, it means we get to go home at the end of the day as well.”