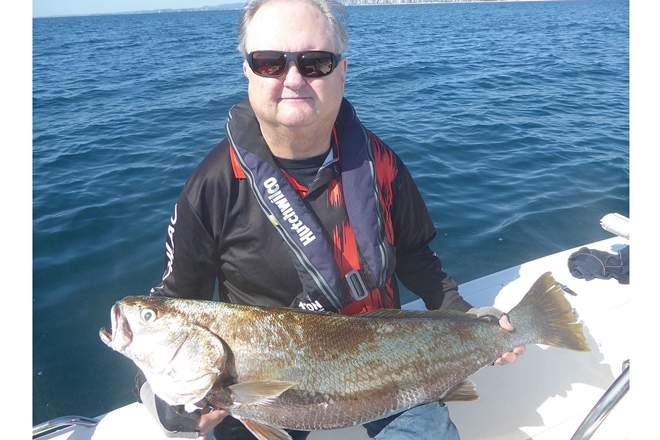 Hi Everyone, hope you’ve all had a great week, we’ve had nice conditions for spending time outdoors on the Tweed and Gold Coasts. The warmer weather is firing up the summer species which is great news for anglers.  Let’s have a look at what’s been biting.

We’ve found the offshore fishing quite good on the close reefs, with regular contributor Wayne Young and mate Rob (see photo in report) doing well on a recent trip scoring a great feed of mixed species including Rob’s new PB Jewfish, Snapper, Moses, Tusk Fish, Pearl Perch and Bonito from the 18 fathom reef south east of the Gold Coast Seaway. Current permitting sound around until you find bait or fish on the sounder worth fishing on then anchor up and float line WA pilchards, Squid and flesh baits will do the job.

Local Fisho Ben White (see photo in report)did well landing a nice Jew Fish and some Flathead fishing the Gold Coast Seaway, best time to fish the Seaway is an hour before to an hour after the change of tide when the current flow slows down making fishing the structure much easier. Soft Plastics, Vibes, Live Baits or Flesh baits will all work depending on the angler’s preference.

The upper reaches of the Coomera River has been producing some good catches of Trevally, Mangrove Jack and Estuary Cod. Local angler John Lewis had some fun landing a nice Trevally (see photo in report). Trevally fight hard pound for pound making them a great target on light or medium tackle. Depending on where the fish are feeding surface lures, metal slugs, trolled hard body lures or Live bait are all good options.

Smithy from Brad Smith Fishing Charters reports on that Tweed this week on the Tweed was much the same as last week with both Giant and Big Eye Trevally on the prowl, and some thumper Whiting smashing our lures. The Trevally have at times been busting up on the surface which has allowed us to cast surface lures at them with the MMD Splash Prawns working well. When the Trevally has not been visually spotted we are getting them by trolling Pontoon 21 lures in the deeper channels. The Whiting have been feeding in the dirtier water where we are getting them on the troll with both Pontoon 21 and Ecogear SX48 minnows, and a few casting Ecogear ZX40’s. In between there are also a few Flatties around to mix up the species count on the day.

Clint from the Gold Coast reports fishing the area from the Seaway to Crab island mainly in the six metre depth zone, catching a variety of fish and getting a feed of Flathead, Squid, and Whiting. Best lures for the Broadwater now to catch a great mixed bag are Ecogear ZX40 blades in colour 411, 414, and 417 (non UV in clear water and sunny days) and Samaki Vibelicious 70mm soft vibes which come in an incredible range of deadly colour. On the other days we fished up the Nerang River, covering the ground and working the tides to catch Whiting, Flathead, Giant Trevally, Grunter and Bream. Mangrove Jacks slowed down a bit at night with the cooler winds but warmer conditions this week are looking good, especially with the bigger tides. Whiting will be feeding hard on worms and yabbies when there is flow. Best fishing is at night in the with the clear water around due to prolonged lack of heavy rain. Try worms and yabbies on a run in tide in the Southport to Capri area.

If you have any great catches to report or fishing photos please email them to  brett@fishotackle.com.au    Good luck with the Fishing.  Brett 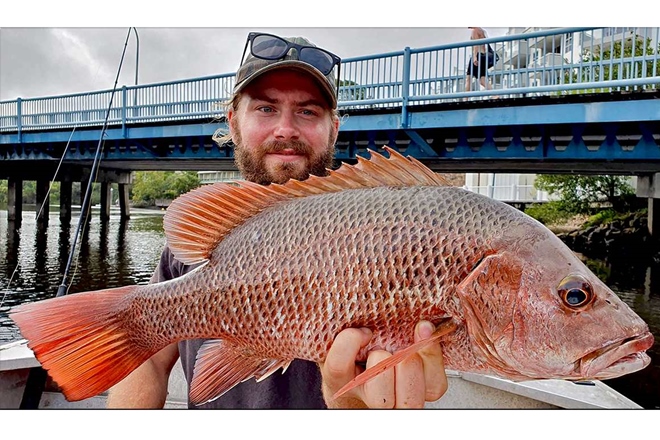