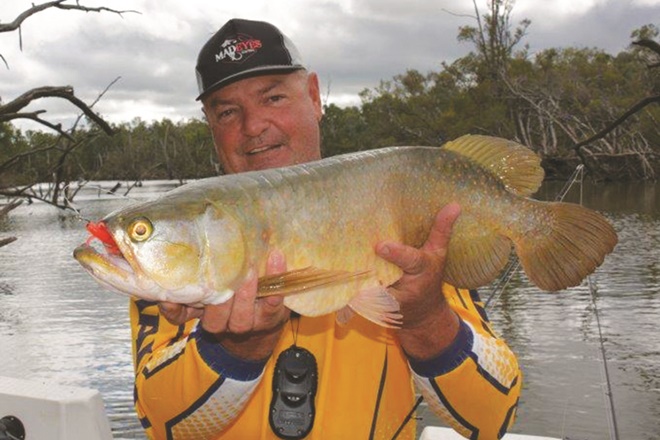 THE Dawson River at Moura was looking about as good as it gets, with clear water and plenty of it for the 2019 Moura Muddy Water Family Fishing Classic.

Fantastic weather all weekend and the community got together for an awesome weekend. Not quite but close to record numbers of fish were caught and weighed in at the two weigh stations and then released. A total of 293 senior and 152 junior anglers from all over Queensland and NSW enjoyed free camping, hot showers and hot and cold food for breaky through to dinner and ample liquids to wash it all down.

Being Easter, plenty of Easter eggs were given out too. The crowds were again entertained by Dave Hodge the ‘Barefoot Fisherman’. He was joined by Helen Abdy, who had audiences mesmerised with fly fishing and casting demonstrations. All junior anglers were presented with a fishing package from Australian Manufacturing Workers’ Union Moura branch.

Over the weekend of fishing, catfish were the predominant species caught but a massive 58 saratoga were also weighed in, along with black bream (Barcoo grunter), golden perch (yellowbelly), sleepy cod, spangled perch and banded grunter. The reintroduction of catch cards showed a much higher number of fish caught that weren’t weighed in. About 120 saratoga were captured according to the cards.

A random draw of the returned catch cards for a G. Loomis fishing rod and water cooler from OZtrail was won by Deidre Hourn. The overall winner for the Donny Weis Memorial trophy was senior male angler Brett Fien with a 2.875kg saratoga.

Results from all fishing sections can be found in the table. Encouragement awards were provided to the junior anglers and it was a major task to decide the winners but those who took away trophies were Henry Caddell, Ruby Nash, Charlie Campbell and Jake Berndsen, along with Davina Steele and Rikki Hay who were both in the Little Juniors section.

The early bird prize for nominating early for the comp was $100 and sponsored by Mrs Poppy Hayden, being awarded to Brian Elliott. Moura Apex Club sponsored the four $500 Anaconda gift vouchers for major lucky draw prizes and the winners were:

This year a photography section was added. The winner was chosen with a photo that really captured the joy and spirit of the river and competition. So many good photos were entered but first prize of an Esky and globe went to Michelle Davidson showing a ‘Junior angler and kayak at the comp’. First runner-up was Better Sceeny with ‘Sunset on the river’. Second runner-up was Brianna Smith with ‘Tubing on the river’. Third runner-up was Dani Berndsen with ‘Kids having fun on a tube’. Finally, fourth runner-up was Margie Powell with ‘Reflections’.

A huge thankyou goes out to all the sponsors who are extremely important in these fundraising events. Equally important are the anglers who make the event what it is.

We hope to see you next year.