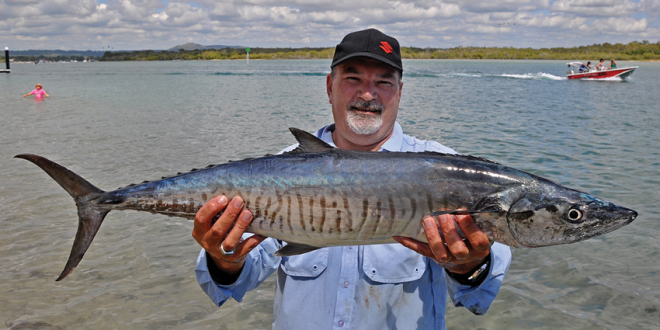 March the month for thumper pelagics

AS yet another month goes by, we find ourselves turning over the calendar to see which comes next; and as it turns out March has come up on us yet again. This month is when the big pelagics come by the coast.

With the waters off the Sunshine Coast holding some large schools of bait, we should see an array of species stopping through from marlin to mackerel, tuna and dolphinfish.

First things first, what you want to look for is bait. Once you’ve found the bait, the fish won’t be too far away. With various popular methods for catching pelagics, one of my favourites has to be the good old floated pilchard, though there are a few things you can do to increase your chances.

One is to use XXL pillies rigged on a set of Shogun ganged hooks in 6/0-7/0 size with a tinsel head on top of the knot above your gangs.

Using this method is very simple and can produce some cracker mackerel as well as by-catch including cobia and other pelagics.

If finding bait is proving difficult, try trolling a tasty spread of shallow and deep-diving hard-bodies and a bibless minnow for good measure. Troll at up to seven knots in search of bait.

Spanner crabbing at this time of year off the Sunshine Coast can be very worthwhile, with decent numbers of crabs coming from water deeper than 25m. Laws state you can have up to four pots per person, with a separate float for each pot. Crabs have to measure 10cm from the centre spine to mid carapace base, and egg-bearing females must be returned to the water.

Also remember to check your pots regularly because turtles and other marine life can make a mess of them. Reef fishing on the Sunny Coast is improving too, with good captures coming from the wider grounds.

Double Island Point, the Hards and the northern end of the Barwon Banks have been fishing well for quality snapper, redthroat emperor, jobfish and trout, with the added bonus of wahoo, plenty of dolphinfish and mackerel.

On the beaches, Noosa North Shore has been home to some cracker whiting and the gutters along the front of Teewah are holding their fair share of fish. Flathead and jew are also being caught along the same stretch.

The gutters along Peregian Beach have seen plenty of dart over the past month, while the beaches south towards Coolum are holding quality tailor and jew.

The Noosa River has been home to some quality-sized jacks, with the stretch between the lakes claiming its fair share of fish. There have also been reports of jew and threadfin in the area.

If you’re a lure fisher, try soft vibes such as the River2Sea Fish Candy. This lure comes in a wide range of colours and has Decoy trebles fitted straight out of the pack, which is a must when chasing these hard-fighting predators.

Live baiting and strip baiting in the deeper holes and out the front of drains during low-light periods can certainly pay off, with jacks tending to come away from their structure in search of food.

One rig that is essential for jack fishing is the double snell. The channel edges along Lake Cooroibah are producing some good size lizards, and the run-out tide is the better time to fish for them.

Trevally have been active along the first ski run, with Keitech and Gastronomic soft plastics working well. Gympie Terrace is a great place to take the kids land-based fishing to chase all the bread and butter species. Just drop by the shop and grab a pack of worms and they’ll be catching fish in no time.

In the Maroochy River, trevally have been active during the low-light periods around the motorway bridge and inside Twin Waters. Fishing the run-out tide at the mouth of Petrie and Eudlo creeks can pay off, with good size flathead and bream feeding on the passing baitfish.

Jacks are on the chew towards the upper reaches of the Maroochy River. Areas including Coolum Creek and Dunethin Rock are worth a try. In Lake Macdonald, bass have been active around the Bubble Trail and Three Ways.

Blades and slow-rolled spinnerbaits are picking up a few. Early morning surface sessions along the edges are also producing quality size bass.

For all the latest information and up-to-date bar and fishing reports, log on to www.fishingnoosa.com.au and don’t forget to drop into Davo’s Tackle World Noosa or Davo’s Northshore Bait and Tackle at Marcoola to find out where the fish are biting.