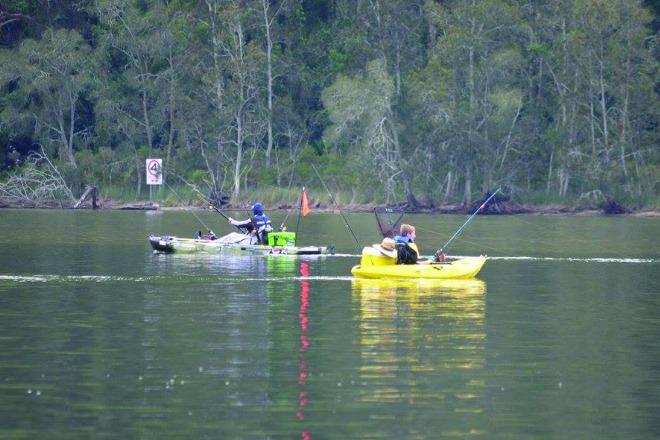 During the past month my family and I travelled about five hours south of Newcastle to Lake Conjola to take part in a kayak fishing competition.

The event was run by Kayak Fishing NSW, which consists of a great bunch of people with the same values as 2 Mates Fishin, so I was more than happy to help out the competition with prizes and tips. The week beforehand I organised some great gear from our sponsor Lox Rods to use as prizes and also to sell.

At the event I had fishing gear and rods for sale at once in a lifetime prices as well as a bunch of prizes to hand out. I went there with 13 rods of varying prices and styles, numerous reels, a few nets and much more.

I thought I wouldn’t sell out but four hours after arriving at Lake Conjola everything was gone. This just goes to show the quality of Lox gear and the high regard in which the brand is held. I should have taken more gear.

After unpacking and selling the gear we were meant to get a pre-fish in before the comp started but I was too busy sharing knowledge with young kids and adults and meeting people such as Ken Gerke, who I had heard about for years but never had the chance to meet. We sat back, laughed, had a beer and talked fishing.

The caravan park at Lake Conjola was amazing and located right on the water with wildlife including kangaroos, ducks, rosellas and more all around us.

Whether you want to fish here or not, this place is absolutely stunning. The beautiful sunset over the lake was a real highlight. We woke the next morning and everyone launched their kayaks in readiness. With over 100 people on the water, it was great to see so many fishos involved.

The competition rules stated it was catch, take a photo and release. Unfortunately, most of the fish boated that day were small, which might have had something to do with the dredging taking place.

A couple of quality flathead around the 80cm mark were the best fish caught. This competition gave me a great chance to test out the new Haswing Osapian transom-mount 30lb electric motor on the Viking Profish GT kayak. It was perfect timing to have the new electric since most of the competitors were in Hobies or Native Watercraft and pedalling away.

The Haswing motors are amazing. They are fast, quiet, draw little power and have a battery meter to give you an idea of your remaining charge. I used the motor all day and didn’t drain more than 20 percent of the battery, and I was flying past all the Hobies.

My fishing partner Jozef Wozniak and I hooked a heap of small fish but unfortunately nothing of great size. Because we didn’t get out for a pre-fish the water was an unknown to us on comp day. But in the end I wasn’t there to win the comp, I was there to help out.

I met some great people and funny characters such as George Abrahim and his family tribe. He is stuck on using bait, not lures, but everyone he knows is trying to convert him. His kids are super passionate about fishing as well, which was good to see. As was meeting and speaking to numerous couples sharing a love of fishing and kayaking.

When it came time for the awards to be presented, the street was packed full of people.


As the prizes were being handed out I was listening to Ken Gerke talk about this young kid at the comp who was trying to get into kayak tournament fishing. He said the kid’s mum has been taking him to many events and in this day and age it’s great to see kids doing something positive such as fishing because let’s face it he could be doing many worse things.

So after hearing this kid’s story I spoke up and said on behalf of Lox Fishing and 2 Mates Fishin I would like to donate a brand-new Lox Tournament rod valued at $730 so this kid could start his dream. Seeing the excitement and joy on his face and how happy it made his mother left me feeling very pleased to have helped them both out.

With the competition over, it was time to relax, have a few drinks and spend time with my family. It’s times like this that make you appreciate the little things.

Whether helping a young bloke out with a brand-new rod or just passing on knowledge and sharing a sunset on the water with my beautiful pregnant girlfriend, that’s why I love fishing – it has a way of bringing people together.

A big thanks to all our sponsors that helped out and thank you to Kayak Fishing NSW for inviting me along to help out. I had a great time on and off the water. As always, if you have any questions, send us a message through the 2 Mates Fishin Facebook page or comment below.

Caino started fishing at a very young age and was taught by his grandfather Peter (pop) Green. He spent countless hours on the beach with his pop and brother Jai digging for pipis and arguing with his brother about who caught the biggest fish. Caino specialises in catching estuary species but loves all forms of fishing. Caino believes he is lucky to have very supportive family and friends helping him follow his dream. Without their support, none of what he has achieved would be possible.
Previous Flathead in Deeper Water
Next New Government Fact Sheet Hints at the Future of Outboard Emissions Standards