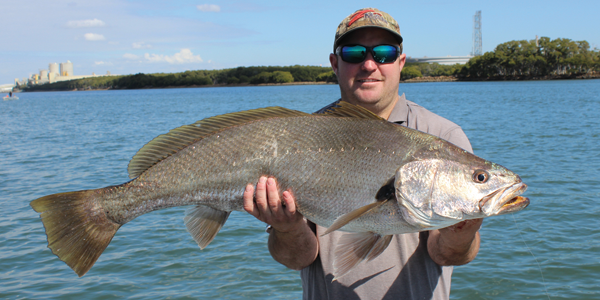 Jew and threadfin in Brisbane River

SEPTEMBER sees the start of some great fishing in southeast Queensland with Brisbane River jew and threadies on the chew. A few winter species will still be hanging around the and the spawning run of flathead on the Sunshine and Gold coasts will be in full swing by the end of the month. The mighty mangrove jack will also make an appearance this month, especially on those warmer afternoons when the northerly wind warms the water temperature.

Winter was a bit of a fizzer for a couple of my favourite species: jewfish and threadfin salmon. The smaller rivers and Pumicestone Passage were very hit and miss and it was really hard to find a decent concentration of fish. Unfortunately a few pros have been targeting the threadfin schools. It’s pretty sad to hear about tonnes of these fish being taken from a small river in one night.

The Brisbane River was the shining light this winter, with excellent catches of both species coming from the mouth up to the Pinkenba ramp. Large schools of threadfin hung around all winter and they are still gorging themselves on bait. Patience is usually the key to success on Brissie River threadfin.  Quite often the fish will be very visible on the sounder but just won’t eat.

Most of the time, and the Brisbane River is no exception, it’s a matter of staying with the fish until they decide to start feeding. This can be frustrating and painfully boring, but it can also be worth the wait if you’re looking for your first thready. Brisbane River jew have been turning up in the same areas as the threadfin and feeding on the same bait. The jewie action should continue right through until Christmas.

One of my favourite months for chasing jew in the river is October because large numbers of legal fish tend to be caught in the deep water. Most of these fish are between 75cm and 90cm and perfect to take home for a feed. Be aware that a lot of the jewies that come from the river will have worms.

They might only harbour a few or they could be loaded with them; it’s luck of the draw. All the jew I’ve kept over the past year, from a variety of systems, have had worms through them. If they aren’t too bad I just cut them out, but on occasions I’ve used the flesh for crab bait.

I’ve heard of people cooking them and the worms disappearing, but I think I would struggle to eat the flesh knowing worms were in there.

Snapper have been another decent target in recent months. I went chasing them in mid-August with a mate and ended up hooking a jewie over a metre on the first cast. It was definitely a bit of fun on the light gear I was using.

The fish ate a Z-Man 3” ShrimpZ in New Penny. These are great plastics for both jewies and snapper in the rivers.

This winter would have to be close to the greatest flathead season I’ve seen in Brisbane. Flathead were in plague proportions and the average size was very impressive. The Pine, Caboolture and Brisbane River and the smaller creeks running off northern Moreton Bay all produced plenty of fish. It was just a matter of finding a decent concentration of bait and putting a lure among it.

Lure choice didn’t seem to matter, with anything in the 3”-4” range getting plenty of attention. I did a lot of night trips this winter chasing jewies, flatties and tailor. Though the jewies were very quiet, the flathead and tailor kept me busy. The standout plastic for me was the Z-Man 3” MinnowZ in Opening Night.

This colour out-fished everything and worked exceptionally well during the day. All the attention on flathead turns to the Gold Coast for the next couple of months. The action there was also really good over winter, with plenty of captures on the flats.

This month should see the big fish move into deeper water and start to feed and breed. Anglers pre-fishing for the Flathead Classic will be fine-tuning their techniques and trying to find a few new hidey holes where flatties may be holding. I won’t be fishing the Classic again this year because my brother Chris and I are off to the Rocky Barra Bounty in the middle of September.

Hopefully the barra are keen to eat our lures. Get out on the water this month and enjoy the red-hot action that spring brings. I hope to see you out there.