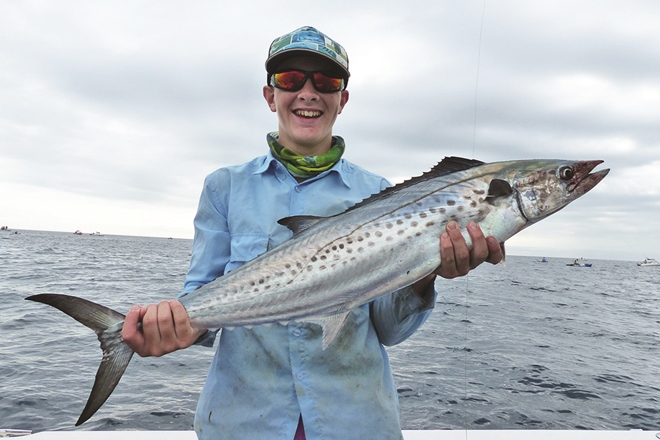 Mitch with a fat mackerel that took a bait.

I HOPE everyone is enjoying the Christmas break and getting plenty of time on the water.

The fantastic run of mackerel has continued over the past month and will hopefully keep on going right through the holidays. We have been lucky enough to catch fish on every trip and have had some unbelievable mornings on the water, with action-packed sessions keeping us grinning from ear to ear. The water temperature has climbed to 24.5C at the time of writing and by the time this issue hits the stands it should be up to about 26C. Those warm, balmy mornings with no wind and an oil-slick sea usually produce the best sessions.

It’s funny how some days you can just feel it will be a great morning and then other days you don’t get the vibe. We had one such morning recently where you could just smell the mackerel, and they absolutely went off with a bang. The hot bite started early at about 4.30am and we left them biting at 6.30am. As we arrived, we could see the fish moving as rods buckled all over the reef. It didn’t take long before the sounder lit up and it was action stations. Double and triple hook-ups occurred through the morning and we even managed a quadruple hook-up, which made things interesting for a little while until the fish were landed. It was a day to remember for all on board and the sort of day where everything goes to plan.

On any given day while the weather is good about 100 boats will be on the reef. Once the holidays kick in that climbs to 250 to 300 boats. That is a hell of a lot of boats. I’ve mentioned several times in past articles that on-water etiquette goes a long way to enjoying your time on the water. I’ve already seen a few on-water disputes these holidays and thought I’d provide a timely reminder to respect your fellow fishers. To be blunt, the early bird catches the worm. So if you decide to rock up at 5am and try to get in between boats, you can expect to be told to get lost in no uncertain terms. On any given day you will see boats anchoring on top of each other in an effort to get onto fish. This only increases tension during a pastime that is supposed to be relaxing. You also run the risk of losing an anchor if a fish happens to run around it.

Alternatively, you could impede an angler who has made the effort to get up early and get on the water. I don’t know if it’s plain ignorance or a lack of care factor in most cases. Anyway, enough of that. A great little tip I picked up last season that seems to be paying dividends is spraying my rigs and lure hooks with cooking oil. I started doing this early last season and now enjoy clean sharp hooks with no rust, even on lures that get used for weeks on end. I was finding that even washing them down and letting them dry was causing the hooks to rust, and when you start replacing trebles or throwing whole rigs out that have been used only a few times it starts to get expensive. So after I’ve washed my rigs and lures I let them dry. Once dry I give them a spray with cooking oil, leave them to sit for five minutes and then put them away. The next time I want to use them, I’m assured the rigs are in tip-top shape with no rust. I just use the cheap home brand oil that comes in a spray can.

As summer rolls along the spotty mackerel will get bigger as they fatten up. The reefs are already crammed with yakkas, so the fish will be feeding constantly, and so much food readily available can have its drawbacks. While the hot run of mackerel may continue, there might be periods where they won’t bite simply because they are full. With so much bait hanging around the spaniards shouldn’t be too far off either. A few small ones have already been caught, so the bigger fish are bound to arrive any time now.

Out wider, mahi mahi are still being boated in good numbers, as are marlin. You will find fish anywhere from the 36-fathom reefs outwards as long as bait is present. In the creeks and rivers, great fishing has continued. Big flatties, jew, thumper whiting and bream are being caught. Lures and baits are working as well as each other. I am starting to be a big fan of lure fishing in creeks. No mess, no fuss and a 10-minute clean-up when you get home sits really well with me.

The Tweed River Bar is getting really shallow out the front and starting to collect any sort of swell, so pay attention when coming in or out. Currumbin Creek Bar is still very shallow out the front. The dredge left recently, so that’s it for this creek. While the dredge did cut a channel to midway along the groin, the front can be very dangerous on anything but a full-ish tide. Tallebudgera Creek Bar is the same, with a small channel and a decent bank at the end. The Seaway is in good shape and you can expect a massive number of boats will be using it over the holidays. Screaming reels to you all.

Heath has been fishing since the age of three and grew up fishing the mighty Georges and Hawkesbury rivers.
Previous Samurai Ledge Shore Casting Rods
Next Seafood Cocktail with Yoghurt Sauce