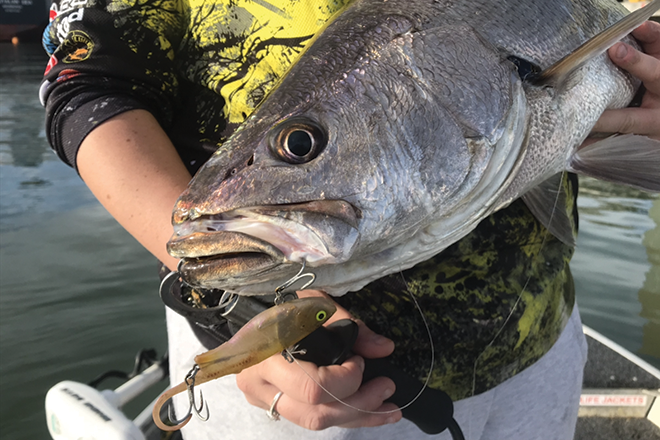 Zerek Fish Traps account for a lot of jewies in the Brisbane River.

Hints for finding fish these holidays

HAPPY holidays to all Bush ‘n Beach readers. Hopefully 2019 brings us all plenty of fishing opportunities.

January will be another busy month on the waterways around Brisbane. Heaps of people will still be on holidays, so expect the rivers and creeks to be busy with all types of watercraft. The key to finding numbers of fish this month is to avoid the busiest times of the day. A lot of holiday-makers don’t tend to get on the water too early and are off the water well before the sun goes down.

Early mornings and late afternoons are prime time for a range of species to feed.  Once the boat traffic picks up, the fish can become a lot harder to catch. Species including trevally, mangrove jack, tarpon and bull sharks are all on the cards this month. Enough flathead should be getting about in some of the rivers to make it worthwhile casting a few plastics or having a troll.

The Brisbane River has seen plenty of threadfin salmon and a few jewies caught recently. The threadfin move out to the mouth to spawn at this time of year, so it’s important to give them a bit of break. Some anglers seem to think it’s a good idea to sit on these schools of fish and catch them all day. Threadfin salmon don’t release well in the shallower water where the majority of them are found in the Brisbane River.

Constantly hooking these big breeding fish doesn’t help the future population. Several jewfish have been getting around the river mouth as well. Some of these fish are schooling in large numbers and most of them are good specimens around the metre mark. They have been difficult to find on occasion and can move around quite quickly, so keeping an eye on the sounder is important.

Once you’ve located these fish on the sounder, you need to get your lure down to them. A lot of the water at the mouth of the river is 12-15m deep, so lightly weighted plastics won’t get the job done. A jig head around 1/2oz in weight will work well. A 3/8oz will also work, especially if the fish are sitting a bit higher in the water column.

Getting a solid hook-up on a jig head-rigged plastic fished in this depth can be difficult when the fish aren’t feeding aggressively. Paying close attention to your line and striking at anything out of the ordinary will give you the best chance of coming up solid. Some days the fish just suck in the lure without any indication, so it’s worth striking at everything you think could be a fish.

Soft vibes are all the rage in the Brissie River.  They account for most of the fish caught there, particularly the Zerek Fish Traps. These are excellent vibes and very easy to fish in deep water. The hook-up rate is also pretty good with two sets of trebles hanging off them. A smooth lift is all that’s needed to catch fish on these vibes.

If you’re sitting on fish and they aren’t biting, try mixing up the lift with a couple of flicks and even dead sticking the lure on the bottom. A scent can help when the fish aren’t playing the game.

Bull sharks have been hanging around these fish and are particularly fond of a nice big threadfin salmon tiring under the boat. I have been sounding up plenty of fish in the river lately, and within a few minutes of fishing the area a shark will be under the boat sitting in mid water. They don’t always eat the hooked fish, but I have seen plenty of anglers lose their fish to them.

Bull sharks will be very active this month in all the rivers and creeks in southeast Queensland. They are a lot of fun to catch and I often head down to my local river and cast net a few mullet to chase them.  I like to float these live baits under a balloon for sharks.

It’s a very visual way to catch them and is pretty relaxing until one of the baits get eaten. Most of these bullies are only small at about 90-120cm long. When hooked, they can pull a lot of line off a light outfit. Circle hooks work really well on sharks and pin them in the corner of the mouth every time.

I avoid using wire traces for these smaller sharks and rarely get bitten off using a 60lb leader. Hopefully January brings us a bit of rain to give the rivers a flush because they’re very clean right up to the top at the moment. I hope to see you on the water.