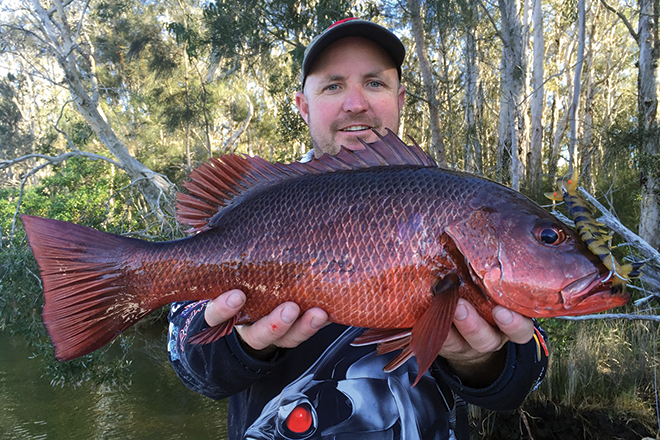 A 50cm jack taken in the upper reaches of the Noosa River.

Gearing up to catch mangrove jack

OCTOBER is a great month for anglers looking to catch mangrove jack in southeast Queensland.

The water temperature will be on the rise this month and plenty of big, destructive jacks will be looking for some lures to steal. The waterways should get back to normal after the school holidays. The Gold Coast is especially busy at this time of year, with the Flathead Classic and school holidays both held throughout late September and early October.Thousands of flatties are caught during the Classic each year, which shows how good the Gold Coast fishery is. October will continue to produce amazing flathead fishing and it’s quite often the best month for size and numbers. The fish seem to come out of hiding after the Classic and it’s not uncommon to catch good numbers of big fish just days after the competition has ended.

As I mentioned, October is a great month in which to catch mangrove jack. It’s still early in the season but loads of fish will be willing to have a chew on a bait or lure. I was pretty slack during the last jack season, with only a handful of sessions dedicated to targeting them. This season looks like being a good one and I’m happy to say I got on the board nice and early.

Towards the end of August I went to Noosa with one of my regular fishing buddies Bretto. We’ve fished at Noosa together many times and have had some pretty good sessions there. It was a cold morning, with the weather station at my house registering 4C before we left. We started out the front looking for a trevally with no luck, so we took off upriver at about 8am.

We weren’t expecting much due to the cold temperatures, but within a couple of minutes a small jewie was in the boat. A jack of about 45cm quickly followed, which we were fairly happy about. Over the next two hours we landed a total of six jacks up to 50cm out of 10 hook-ups, along with a stack of by-catch. I’ve always caught a few jacks at the end of August, but I hadn’t experienced a good jack bite like that before.

Noosa is one of my favourite places to catch mangrove jack in southeast Queensland. I’ve landed heaps of jacks throughout the Noosa River, with the most productive area being around Johns Landing. Johns Landing is a campground situated between lakes Cooroibah and Cootharaba. It’s a wild piece of water with endless deep sections, snags and rock bars.

The campground is definitely interesting and is best visited with a very open mind. There is a boat ramp in the campground but it’s more suitable for smaller boats up to about 4.5m in length. Straight out the front of the campground is a great big rock bar that stretches for hundreds of metres. Some sections are covered in mud but a heap of exposed rock is spread across this area.

A few big pinnacles produce good jacks at times too. This particular rock bar cops a lot of pressure and although it still produces solid fish, plenty of other spots yield more fish. Endless fallen trees can be found lying in the water throughout the entire stretch between the lakes.

Choosing the right ones to target is the hard part. I stay away from the trees in shallow water. Even though they will hold a jack at some stage of the tide and day, I prefer to target trees that have fallen off the drop-off into deeper water.

I find that snags with a decent depth of water over them at all stages of the tide hold more fish and also the better-quality fish.

My favourite snags are the ones out in the middle of the river that have washed down in previous floods and become wedged on the bottom. These snags rarely get fished and often hold good schools of jacks, including some really great fish over 50cm. I like to vertically jig these snags. Most of them are in deep water of 6-9m, so it’s difficult to make sure a cast lure is right in the zone.

Vertically jigging directly under the boat allows you to line up a drift over a chosen snag and work the lure right in amongst it. Snags can be common if you’re not concentrating and your lure is dragging a bit behind the boat. The best advice I can give is to not let the lure sit on the bottom for long, especially when loads of current is running.

As soon as it hits bottom, give it a couple of sharp flicks so it can get over any branches and then let it sink back to the bottom. As soon as it reaches the bottom, flick it back up again. Once you’re in enemy territory, be prepared to strike hard and try to rip the jack’s head off. Getting a good strike on the jack early and a few cranks on the reel is vital, especially when you’re fishing deep in the structure like this.

It can be very brutal at times, especially when a jumbo model eats your lure right next to a tree trunk. The bust-ups keep us coming back for more though.

Targeting this type of structure isn’t just restricted to the Noosa River. Endless rivers and creeks throughout southeast Queensland offer the same type of structure. The choice of lures remains the same. When you’re putting a lure deep into a sunken tree, it needs to be rigged correctly. A standard jig head-rigged plastic is basically a donation in this type of country.

If you want to use a soft plastic, it will need to be rigged on a weedless or snagless jig head. I use the TT range of jig heads. TT has a huge variety to cover everything and the jigs are always top quality. Always use good-quality jig heads for your fishing but especially when chasing jacks.

There is no point going to all the effort to get a jack bite to be let down by inferior gear. TT SnakelockZ heads are an excellent choice for fishing deep in the snags.
They allow a plastic to be rigged as close to snagless as possible. Some of my favourite plastics to rig on the SnakelockZ are Z-Man 4” SwimmerZ and 3” MinnowZ.
I’ve caught many jacks on both these plastics in a wide range of colours.

Another lure designed to be fished deep in structure is the Prawnstar. I’ve been using Prawnstars for years now and I’ve hooked plenty of jacks on them as well. They come in three models: Original, Junior and Shrimp. The Shrimp is more suited to bream and bass fishing, so I use the Junior and Original for jacks. They’re super-tough lures that stand up to a jack’s teeth and powerful jaws with ease.

As the water continues to warm, the jacks will only become more active, so get out there and enjoy these great sportfish. I find they are too good to catch only once, so I release all the jacks I catch. I hope to see you on the water.