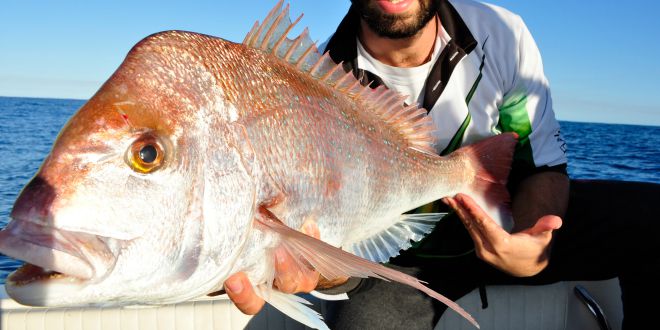 Float Lining for a Trophy Fish

FLOAT lining is the broad name for a technique that can be done many different ways. Depending on the depths you are fishing and the conditions you are facing (current and wind), a few options exist. The goal of float lining is to get your ideal bait down to the bottom as slowly as possible, drifting down through the currents and moving as if it is totally natural.

Most larger snapper feed up off the bottom, so float lining creates the opportunity for these larger fish to hit the bait. The majority of fishing I do is in 80-100m of water chasing big snapper and the occasional by-catch.

I float line by running 70cm of 20lb leader to a 5/0 snell rig. The top hook on my snell rig is an ELKAT fly. The fly works as an attractant as the bait slowly drifts down. Depending on how strong the current is, I use a running sinker.

The trick to float lining is patience and persistence. You may let out 200m of line before coming anywhere near the bottom.

Once I have noticed that the bait has hit bottom, I retrieve my line and repeat the process. A lot of anglers tend to float line with large pilchards and frozen squid. From my experience, nothing beats fresh baits. If I can get my hands on fresh squid or any other fresh bait, that’s the prime stuff. Of critical importance is having a reel that can hold a minimum of 300m of line.

I recommend the Daiwa Saltist LD20H when float lining for snapper. Though this reel doesn’t cost a whole lot, you certainly get your money’s worth. The Saltist is an extremely light reel and that’s what you want when float lining. It also has the capacity to hold 400m of Daiwa Tournament 40lb braid.

Braided line is a must when float lining because it sinks easier than mono and you can feel the pull of the fish a lot earlier. Another benefit of using braid is the diameter of a good-quality PE2 braid is just 0.24mm, which is equivalent to 8lb mono line. That small diameter is exactly what you want when fishing offshore.

The Saltist is a quick-winding reel with a gear ratio of 6.3:1, which becomes evident when retrieving 200-300m of line. I swear by a Major Craft Giant Killing 6’ rod that is rated to PE0.8-2 (perfect for snapper). This rod is ridiculously responsive and I have comfortably caught everything from a 40cm snapper to a 20kg amberjack.

Many good fish have fallen to float lining this year, and though I chase snapper in the colder months, I have also hooked the occasional kingfish, amberjack and even mackerel. With the bait moving slowly down, it’s not rare to see large pelagics take the bait as they swim mid-water.

July and August are our prime offshore snapper months and we tend to hit the Barwon Banks hard during these months in search of that trophy snapper. Over the years, I have noticed that during mid-winter the snapper will hold in deeper water and as summer approaches they tend to head to the shallow reefs for spawning.

Some people think you need to travel many kilometres offshore to catch big snapper, but that is not always the case. My PB 88cm snapper was caught in Moreton Bay in just 3.5m of water. Fishing the bay is a lot harder than fishing the offshore reefs.

Fishing the correct tides, moon phases, with fresh baits and the right technique will help you land a quality bay snapper. The shallow reefs off the Moreton Bay islands usually hold large snapper in September and October.

However, this has been a great snapper season and we have already seen ripper snapper at a lot of our spots, in the bay and offshore. Up until mid-October, we tend to focus our travels on the Barwon Banks, which are located about 45km northeast of Mooloolaba. The last trip out to the Banks was on a full moon and the fishing was unreal.

I strongly advise anglers to read up on how to release snapper properly, especially in deeper waters of 60-100m, which is where most snapper are caught. It is one thing to not exceed your bag limit, but knowing how to release fish when you have reached your limit is another.