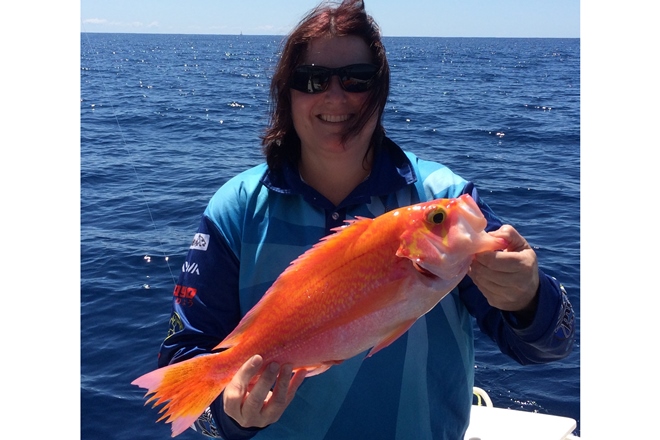 A pink thing landed by Helaine.

HELAINE Wilesmith took the reins at the monthly meeting while Rob Schomberg was off gallivanting around the world.

It’s probably a well-earned break but I suspect it’s also a ploy to get someone else to fill the chair on a permanent basis. With H in the seat it was down to business and first on the agenda was presenting the Bush ‘n Beach Trophy to the winner after the 1770 trip. Silvano Gordano was the very proud recipient and now has bragging rights for at least the next 12 months.

Other winners weren’t at the meeting, so their trophies were either collected by their mates (good luck getting them back in that case) or held over until they get to another meeting. Always looking for new and fun ways to get the family involved with what we do as a club, the committee has decided to put on a beach family fishing and camping weekend. The site has been booked at Noosa North Shore for a weekend in November, so expect to see the Power Boat Anglers marquee at Noosa surrounded by various camping and caravanning contraptions. I have it on good authority that some members of the committee don’t like getting sand in their bunks and are rather attached to their creature comforts. Story goes that one has already booked a cabin complete with air-con but only a short distance from the main camping area. Looks as though we have a nice place to invite ourselves if the evenings get too muggy at least; make sure you stock the fridge H!

As far as the fishing side of things goes, as always we’ll be having a competition between ourselves and have added junior and female angler prizes to encourage participation. I’m not sure what the prizes actually are but they are guaranteed to be something worth the effort. The competition will start on Saturday with a barbecue and weigh-in at the end of the day before fishing again on Sunday up to the final weigh-in at lunch and a sausage sizzle. It’s sure to be a great weekend.

On the club’s deep-sea fishing front, there hasn’t been too much action of late apart from that of the few lucky individuals who can manage occasional weekday trips offshore to take advantage of the odd pocket of good weather. While lacking great catches to set the world on fire, most are reporting landing a decent feed at least. Two of our main culprits who always seem to get out during the week are H and Rob. The pair headed out on a recent Thursday and although a late start, conditions allowed them to head wide of Cape Moreton to some deeper water to target pearlies.

On arrival, the current was ripping and a 12oz lead would shoot away down the current like a Ferrari on a highway. H had all her braid in the water and was almost down to the backing before getting a hit. It was a pearlie but the long wind home left her questioning whether it was worth it. After a few more drifts and the long wind back the conversation had turned to the advantages of an electric reel, particularly as the boat near them was using one and pulling fish every drift. They both agreed an early Christmas present was in order, after which they would be back to try again.

Moving in to the 110m mark, current was still present but way more manageable. H pulled in another pearlie and a lovely pink thing, much to the disgust of Rob who could only look on with envy.

The pain for Rob was further multiplied when H’s plastic rod took off. She struggled to get it out of the rod holder and it didn’t take long to realise it was well and truly a decent fish. It took off on several high-speed runs, nearly spooling her three times. After a decent fight she finally had control and soon a yellowtail kingfish was boatside. Rob didn’t want to gaff it or indeed have it on the boat but H had promised the rellies some fish and this was going to be it.

Having finally had enough of the current, they moved to shallower ground to collect livies and set up for a dusk bite and hopefully a decent jew. First drift over the kelp and they were on the money, with Rob’s reel screaming off but not with a jew; something better in the form of a 5kg snapper. Things were looking up. Drifting back over the same spot, this time it was H’s rod that took off. It was obviously a decent fish but had her in the kelp and spat the hook before she could get it set. In short time it was Rob’s turn again and after a tussle he had slapped a 9kg jew on the deck and in doing so slapped the smile of H’s face.

Soon after, Rob was on again with another good fish that headed down under the boat. He expertly guided it around the motor, the parachute and dodged it in and out of the other lines hanging off the boat and finally thought he had the upper hand when he suffered a gear malfunction. Yep, the elastic broke in his duds and they started heading for his ankles. Panic set in with Rob doing the twist trying to keep his pants up while fighting the fish at the same time. H was totally useless in this situation and refused his call for help but got one hell of a laugh out of it. The fish must have sensed something was up and took its opportunity to again head under the boat and this time to freedom. Pantsed by a fish; now that’s a bit different.

Things went quiet after this, both in the boat and out of it. After listening to whales breaching close by in the darkness it was time to head home. The moon was up and Moreton Bay was flat, providing excellent conditions for the return trip, with the pair arriving safely at the ramp at 11pm.

Next meetings
The next scheduled meetings for the club will be held on Monday, November 2, with the last before the big Christmas break on December 7. Meetings are held on the first Monday of the month at the Bulimba Bowls Club located in Quinn St, Balmoral. Please feel free to come along and see what the club is about. Until next month, safe boating.