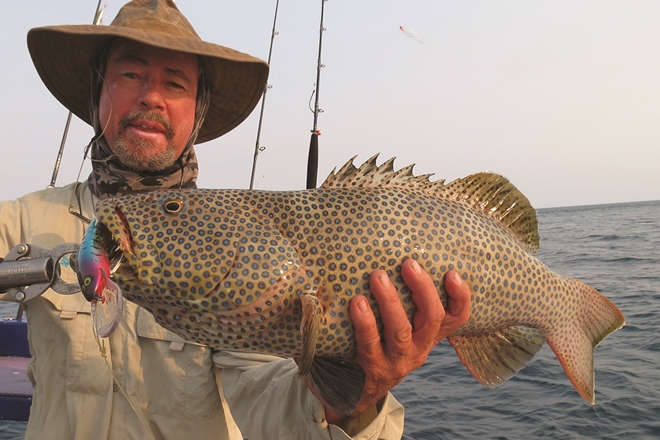 THIS is a seriously exciting time of year!

For while barramundi in tidal waters remain off the target list, the reefs and headlands on both sides of epic Cape York are now beckoning. Doldrums weather generally rules at this time of year, having taken over from the blustery ‘mango winds’ (there can be exceptions though).

Nothing is quite like boating seawards on a glassed-out sea, keen with anticipation as to what you might catch, enjoying one of the most beautiful seascapes and coastlines on the planet. For those fairly new to tropical reef fishing, habitats worth targeting include the reef drop-offs, particularly where ‘canyons’ occur (try a variety of depths), isolated pinnacles, bommies and rubble areas away from the main reef.

Pressure points where the current first hits the reef can really go off. Travelling from the south, Cooktown is the first obvious fishing destination on the east coast, with wonderfully productive reefs only half an hour away by boat, and other crackers not much further. Cooktown has a great range of services, including the ‘Lure Shop’ and a camping and boating/RV store.

From here, Boulder and Egret reefs are close, and probably fished the most for that reason. However, they still produce well. Further east of Boulder is Big Uncharted, while Cairns Reef, Rosser Reef and a few smaller one are south(ish). All are cracker fishing locations at times. You can also enjoy a good snorkel at the Hope Islands, where you can also rest or have lunch under the shady trees.

The twin boat ramps in the Endeavour River at Cooktown are the best to launch from. The Annan River just to the south has a good ramp, however the river downstream from here is very shallow and typically unnavigable on the lower half of the tide – as is just outside the river mouth. You can also beach launch smaller boats at the beautiful Archer Point, south of Cooktown, and even camp there with some nice shady spots.

This is a good option for more quickly accessing Cairns and Rosser reefs and Hope Islands than from Cooktown. Now, if you want to see one of the most spectacular coastlines in the land, boat down from Archer Point, past Whalebone Beach to the stunning Cedar Bay. Here, lush tropical rainforests clothe rugged mountainsides and headlands, interspersed with small, secluded, sandy beaches. It’s just magic!

Mention of Cedar Bay brings to attention another great, but much lesser known destination for reef and river fishing. And that’s the Ayton/Bloomfield area about 75km south of Cooktown. You can launch at the boat ramp in the Bloomfield River just south of Ayton and gain access to more beautiful coral reefs. The Bloomfield, a mountain river that tumbles down a beautiful waterfall onto the coastal plain just inland of Wujal Wujal Aboriginal community, is also worth fishing for tropical estuary species.

Here, barramundi and mangrove jack are prominent captures. This is a wonderfully scenic area, accessed from the south via the four-wheel-drive Bloomfield Track (from Cape Tribulation onwards). The track features seriously steep climbs but is a truly beautiful scenic drive. Coming south from Cooktown, the road (past the Lions Den Hotel and Rossville) is now all bitumen, and traverses a beautiful stretch of country.

Ayton itself has the Bloomfield Beach Camp and Haleys Cabins and Camping as accommodation options, and a small store in the township offers basic supplies and take-away tucker. Heading northwards on the Cape, by now many coastal national park destinations have been closed for the imminent wet season due to the risk of people getting stranded. However, Kutini-Payamu National Park (formerly Iron Range) near Lockhart River Aboriginal community may remain open if the weather holds.

Here, you can beach launch from the camping area at Chilli Beach and experience excellent fishing relatively close by, and of course out wider on the GBR. A good sounder will help you locate small reefs and rubble that can be super productive for fingermark, large-mouth nannygai and coral trout. Be aware that estuarine crocodiles live all the way around the Cape York coastline, so snorkelling is not a good idea here!

Weipa on the west coast is well known as a prime fishing destination. The reefs inshore are often fairly small but usually hold great numbers of fish, with fingermark and tuskfish common captures. Always keep an eye out for bait balls being hammered by longtail tuna too. Quickly retrieved slugs/blades will almost certainly result in hook-ups with these hard-fighting and great-tasting fish (particularly when made into sashimi!).

Another great option is to camp at Cullen Point at Mapoon Aboriginal community, about 80km north of Weipa, and access Kerr and other reefs. A top spot, again with magic coastal scenery. The Northern Peninsula Area is the next and most northerly fishing destination, offering great estuary, pelagic and reef fishing. Boats can be launched at Jackey Jackey Creek, Seisia and Cowal Creek at Injinoo, allowing you to again venture into remarkable sea and estuarine country.

Collectively, the four Aboriginal and Torres Strait Island communities offer campgrounds, often with cabins, food stores and mechanical services. Bamaga also has a hotel with limited take-away supplies. This is a magical area, with a tropical flavour all of its own. At this time of year you will often see lightning flashing away over New Guinea, just across the Torres Strait.

Coastline wise, there are just too many productive stretches along epic Cape York to mention individually. Suffice to say the rocky headlands, bays and nearby waters can produce a fantastic range of fish such as fingermark, mangrove jack, goldspotted cod, maori sea perch, coral trout, both species of salmon and pelagics such as trevally, queenfish, spanish mackerel and cobia.

So if the wind is up or you feel like a change from the magnificent coral reefs, head for a sheltered section of coast. Be aware that along the Cape a sea breeze will typically kick in around midday at this time of year, often reaching 20 knots. This will be a westerly (ish) on the west side of the Cape, and a northeaster along the east coast.

They are not dangerous winds for a seaworthy boat and good skipper, however the resulting steep chop can make the trip home rough and slow. It’s common practice now on the Cape that anglers fish the morning, have a bite to eat in the middle of the day and then tootle off home when the sea breeze starts to develop.

This way you’ve got plenty of time at home to fillet the fish, clean the boat and later as the sun sets against a glowing sky, share a feed of fresh fish with family and friends. Living the dream! Also be aware that December can be the month when the wet season properly sets in, though statistics indicate this generally happens after about the 20th. However, statistics are just statistics, and there are plenty of examples of when the monsoon has arrived earlier or later.

Otherwise, thunderstorm activity is usually about, especially along the western half of the Cape. It obviously pays to keep a weather eye out and check forecasts. Wishing everyone a great festive season!