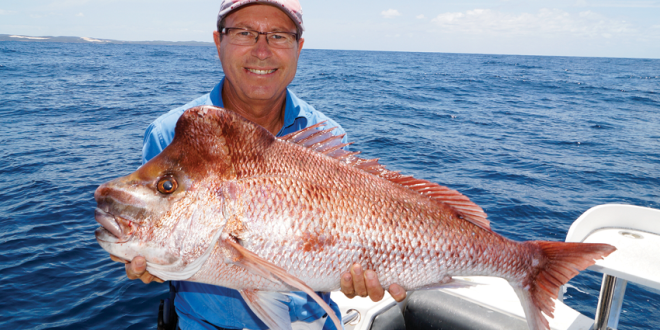 The author got lucky when fishing the shallows south of Point Lookout.

WHILE we wait for mackerel to show up in numbers on the inshore reefs, it has been worthwhile pursuing some of our best reef fish on the seabed with good results. Our offshore options have been determined by the current and sea conditions of late.
They have varied from the deeper ridges southeast of Point Lookout along the 50-fathom line to the isolated bumps of rock and low-profile ridges on the 28-fathom area a fair distance south of Point Lookout on the days when there is excessive current running over the steep peaks of the Cathedrals.

When the current has been running hard, some of the Moreton Island back ledges have fished extremely well on long drifts and it is interesting to head back there as soon as the current eases to see how differently the fish school and spread out over the small, flatter sections of reef.

Check out the photo of a sounder image of the 50-fathom ground off Point Lookout. The thick, solid tail of the seabed indicates very hard and rocky bottom with a good smattering of wire weed and pearl perch on the lower left side and a thicker patch of fish and wire weed on the higher section to the right side of the image.

It was a particularly slow drift that day and the sinker was picked up in the beam of the transducer as it plummeted to the bottom.
While that particular model of sounder is no longer available, in the mode it was set in it is the equivalent of several other brands on the market, having a stock-standard 12-degree cone angle on the transducer, 600W of power and being used on high frequency of 200kHz.

It does everything you could expect it to at that depth and a good bit more.
Essentially every decision in fishing offshore comes down to how well you manipulate the sounder and interpret the image.
Without fancy bells and whistles to separate the larger fish, when I see a patch of fish such as what’s displayed on the screen I get quite excited.

What came out of that big mass of fish on the right side of the image was a good feed of rosy jobfish, pearl perch, blackspot pigfish and even a large blue morwong, a species that you would normally associate with more southern waters. While the Cathedrals has been fishing well for a broad range of species, when the current runs strongly to the south past Point Lookout it is often advisable to work further south and a bit more inshore, as North Stradbroke Island kicks inwards with a slight south/southwest slant that frequently allows you to get out of the current.

I got lucky on a slow drift over one of the isolated rocks in the area recently after picking up a rod because a couple of the crew weren’t feeling too well. I nailed a great snapper of 8.5kg on a live yakka. For big fish such as this it is preferable to approach from up-current or upwind as the case may be, cut the engine early to minimise noise and work baits down through the water column to where these larger wary fish hang out.

If the big fish are there you can always anchor and play the patience game or move on to the next piece of structure and play the stealth game for often sensational results. When out deeper and the current is running, it is essential to find a drift over a section of reef that is reasonably long and use bigger sinkers to keep the baits down deep.

It’s not the ideal situation but often in summer there is no choice and that’s what needs to be done to catch fish. On a recent day when the current was running at 4-5km/h on a flat ocean with hardly a puff of wind we drifted over some very good shows of fish on the sounder that were sitting on the down-current side of a small piece of rock in about 70m of water.

Presumably they were there to rest and avoid the current. Each drift over that spot yielded excellent pearl perch, small snapper and blackspot pigfish. We let the drifts progressively grow longer to about 1.5km, resulting in identifying more patches of fish hanging behind rocks.
And being a good moon phase, they were very hungry too.

It didn’t take long to put a solid feed together and was a great example of persistence paying off on a day when the closer inshore lines of reef were not firing. It was interesting to go back there a couple of days later with my son Ashley and George Baumber from Wynnum Marine.
The current had dropped heaps and the fish were more spread out over various sections of hard bottom, no longer needing to hide out of the current behind upwellings on the bottom.

We were keen to invest some time in the area, working as a team to see what else we could find. Fishing the bottom saw us land good size pearl perch, snapper, parrot and moses perch. With a different drift line that day in a light northeasterly breeze, we drifted over some totally flat bottom while retrieving the rigs and taking in the sea anchor.

It had a coating of wire weed that looked like grass clippings spread over the seabed and the tail on the sounder as the main ridge line, but was thicker than the adjacent sandy bottom. On a subsequent drift this patch of rubbly bottom gave up some of the best pearlies of the day and was purely a result of finetuning the sounder and being willing to invest a bit of time in the area, learning more of what it held on the bottom.

On a little 2m rise nearby there was a school of fish sitting vertically about 4m high over the east side of a ridge. A floated bait on an 8 ball sinker nailed good midsized snapper and all within less than a kilometre. Another kilometre away we placed the boat to drift along a little valley between two pinnacles. It is rare to get a drift going in this direction at that location as we sometimes fish those pinnacles for snapper in winter.

The roughly 200m-long drift along this valley had some broken pieces of bottom and wire weed according to the sounder and Ash showed us up by pulling the better-quality fish. Again this is the result of a well-tuned sounder and the sort of thing that can be done with any brand of unit in deep water, providing the sounder either has plenty of power output or a narrow-beam transducer.

While on sounders, if you are in the market for a Christmas upgrade, head to the guys at Trymax Marine Electronics at Capalaba.
You will be offered a range of sounders that will do the job you intend at very fair prices, and all the staff are guys who fish and are qualified marine electronics technicians as well.

Bill has been spearfishing, fishing and surfing for all his adult life and now runs a business specialising in teaching people how to cross coastal bars and fish offshore. He also runs charters for people who fish for the right reasons and whose company Bill thinks he will enjoy. He’s been running his bar crossing business successfully since 1996 and hopes to continue doing so for years to come as he grows old disgracefully.
Previous Techniques for some new lures
Next Targeting whiting on lures