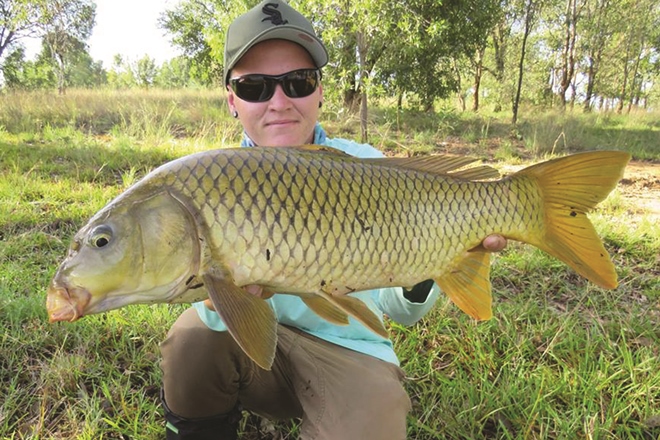 The author spotted this carp feeding with the help of his Spotters sunglasses.

FEBRUARY is a time of year when most anglers rub their hands together in anticipation because water temperatures stay consistently high, ensuring predatory fish are fired up.

In the rivers, about 30C seems to be the common temperature and offshore about 27C, meaning it won’t just be spotted mackerel showing up offshore but spanish mackerel will arrive any time now too. People are still targeting small black marlin and dolphinfish by trolling skirts around the 50m lines at about six knots. Having a spread of a variety of lures running at different depths and distances will increase your chances of hooking up.

Mangrove jack are still being caught consistently by anglers casting lures at structure and live baiting. Throwing 3”-4” lures on a 5-10kg setup is generally more than enough to turn the head of these fish but sometimes it doesn’t matter how big you go, jacks can still pop you off in a heartbeat. Fishing permanent structures that are in the water at all stages of the tide will give you a better chance.

Deep rock walls, larger tree lay-downs and pontoons and pylons are the key areas to target. One thing to consider is jacks are known to strike out of aggression due to their territorial instincts, so don’t be afraid to cast at a particular area more than once, trying to bring your presentation back on different angles. Surface fishing for these fish should really pick up in coming months as the bait spawns, so plenty of jelly prawns and little fish will be wishing they could grow legs and jump onto land to run away from the jacks.

Trevally have been popping up but not in thick schools. It seems to be two or three fish swimming around as a mini school, though it’s still hard to miss the sound and sight of trevally feeding. Throwing surface lures for trevs is great fun and these lures also best replicate the feeding behaviour of their prey, so it is the best technique to maximise your chances.

I have been trying to pick up my fly rod a bit more because trying new things and trying to learn more is always rewarding. A fishing target often overlooked is carp on fly.

They can be frustrating at the best of times but any carp caught and taken out of our waterways is one (or more) native fish better off. Targeting carp on fly is not the easiest of tasks.

I use 5 and 7-weight fly rods, using line weights to match the rods, as well as 8-10lb leader. As far as flies go, carp can be caught on different patterns and shapes from little leeches to worms. I find the worms work better, but each to their own. Generally, catching carp on fly is all visual because they can be seen with their fins out of the water while their heads are down feeding on the bottom. Maintain a decent distance from the carp to not spook them and then cast your fly in their direction, waiting for it to sink.

With a good pair of polarised sunglasses you can often see the take, and strip striking or just a gentle rod lift often sets the hook and you’re on! Something to consider is because you’re fishing so close to the bank, if you can see them, they can most likely see you, and if they aren’t fixated on anything they will often spook. So when cruising the banks and searching for them, try not to make much noise, and as mentioned, a good pair of sunglasses can go a long way.

I use a pair of Spotters sunnies, which help cut the glare and enable me to spot the fish cruising or feeding. Once you catch a carp on fly or otherwise, you must then bury the fish far from the water’s edge. Even though carp are in abundance, one fish out of the water can mean thousands of eggs not hatching. Every little bit counts.

Tilapia are becoming thicker in our lakes once more and it won’t be long until they spawn. Hopefully people can get out and catch them before they do so, especially in systems such as Clear Island Waters. Clear Island Waters used to be well known for its great bass fishery and tilapia were unheard of. Bass were everywhere from the lilies to the grass edges and under the pontoons but because of tilapia and the council’s effort to eradicate them, all the lilies have been removed, providing no structure or security for the bass and forcing them deep.

This has made it harder for lure fishos to target them, so every tilapia caught and removed from the water is a step in the right direction towards restoring a great fishery back to health. In February, with warm water and everyone back at work, you’ll regret not going out because it should be a good month of fishing across the board!