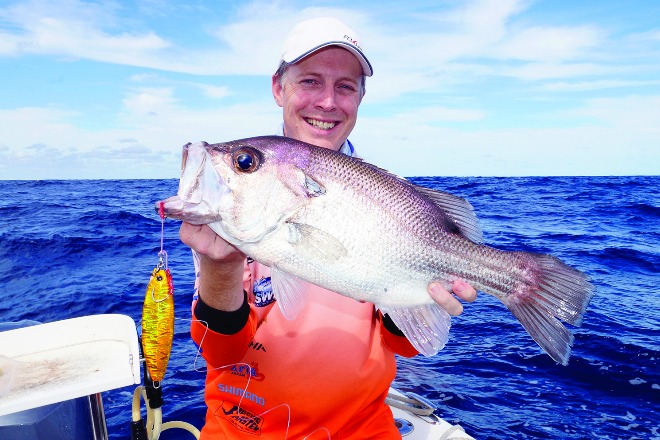 Changes Around the Bar & How to Catch Tuna, Pearlies, Amberjack, Kingfish, Cod

I HAD heard murmurs of big changes around the bar, but on the first trip out my marks were pretty close to still being on the money.

Some changes are seasonal and incremental change is always occurring anyway. However, the bar does look very different on a day of decent swell compared to a small passive day, and it is critical to know where the real channels are. Just as critical is understanding what the best options are and taking account of wind, swell and tide, versus the approach of ‘just head up the road and head out where you see a break’.

Every time Ruth and I head off in the caravan for a few months we pinch ourselves at being able to do so after all these years, and just as importantly, no matter how good a time we have, I am always itching to get home and put the boat back on the water and tear into bar crossing work and to pick up the threads on the offshore fishing scene.

It is a life balance thing of work, pleasure and passion for the activities we really enjoy and rejuvenating ourselves in the process. This time around was no different and I was keen to see what changes had occurred on the bar during my period of absence because solid swells had been rolling through.

Probably the biggest change while away is the way the false middle channel, the one the trawlers use, has become more choked with sand. It’s not a good look heading out there on a decent swell around the bottom of the tide to halfway up, and requires a bit of course alteration while dodging the set waves towards the southeast.

The southern channel at Amity Point is still shallow in the middle sections, with sets closing out all the way across the channel when the swell is out of the east or east-southeast. This is definitely not a good small boat or open boat option on those kinds of days. The middle channel, well north of the sand island, is still the safest bet when the surf is up, but you do have to be aggressive on the throttle while working through there when the swell is up around the 2m mark.

One of the biggest improvements around the bar has occurred at the shallow entrance to the north of Short Point. It is an interesting area with a couple of options either side of the sandbank at the outer extremity and has a few strange quirks to it when the swell is out of the east. Also, it is a more challenging run nearer the bottom of the tide, and timing is everything if a decent swell is running from the east because the waves can stand up rapidly on the outer bank as they move from quite deep water to very shallow all of a sudden.

Reading the waves and reacting appropriately are skills you cannot acquire from reading a textbook.

Moving on from the bar, we’ve seen a slow but steady improvement in fishing results as we head into the cooler period of the year.

The first trip out after the long adventure away was very slow and it was a matter of moving around to find the better fish. I had expected the 29-fathom line to fish a lot better. I settled for admittedly big moses perch but didn’t have much else to crow about.

Out around the 33-fathom line, excellent pearl perch and parrot have been taken on the flatter areas, whereas the more peaky ridges and pinnacles along the eastern line have seen a larger build-up of snapper compared to earlier this year.

At the time of writing we had noticed an improvement in snapper size, but there is a long way to go before we hit the ‘season’. Interestingly, off Brisbane more consistent catches of snapper have come from inside Moreton Bay than on the offshore grounds, but that will change dramatically in a matter of weeks.

What has been really good is the quality of the pearl perch on the deeper grounds, and awesome yellowtail kings and amberjack have been caught while working live baits and jigs.

The bloke who I reckon is the master of slow jigging, Duncan O’Connell, accompanied me on a trip to show his English visitor and long-term friend Martin Dye what jigging can be like off Brisbane. Working along flat ground just out from the 100m drop-off, Duncan scored a 56cm pearlie on a gold 400g Palms Slow Blatt jig that is oval in shape and ideal for slow jigging. Not a lot of current was running but the heavier than normal jig allowed more time in the zone where the fish were, and by patiently working the jig slowly, Duncan was rewarded with a great fish to take home and several more slightly smaller fish.

Duncan’s old mate Alan Jarvis was along for the trip for old times’ sake and worked away on live baits for the day. He might have been the grandfather of the crew but he caught the most fish. Alan preferred to use mullet and cuttlefish pieces, but it was with the live baits that he nailed the bigger fish.

A combination of a solid amberjack on the first drop of the day, a bar-tailed cod just out over the edge where the pearlies came from, pearlies on baits and big yellowtail kings on livies had Al telling me his knees were grinding. The funny thing was it never stopped him from dropping his rig over for another fish and he shot me some photos a few days later of his other hobby, which involves producing amazing Asian cuisine from his catch.
I also had Tarek on board, and while he hadn’t fished offshore too much, he took my advice to stick to the livies.

He got smashed on the first drop of the day, then was sharked on another fish and that began a pattern that we changed around later while we worked over a series of bait schools hanging out over the edge around pieces of flat and hard structure.

Mega mack tuna and kingies were working up the deep bait schools that day and Martin got into them with jigs. Earlier on, his first jig-caught fish was an amberjack that, just short of the boat, a shark turned into a head without a body.

With a bit of persistence that sobering start turned around later with pearl perch on the oval-shaped jigs and bigger kingies on the longer jigs by working them slower with a fluttering action.

I like kingies because they slam a jig or live bait very hard, are feisty all the way from being hooked down deep until boat-side, eat well if bled straight away and just as importantly, release well too and are just a great sportfish.

The jungle drums are saying the fishing here is so good that there could be a major lifestyle change coming up for Martin and his lady. We had such a fun day that we never got a chance to look at some other favourite spots to see how they were firing.

But we were more than satisfied with the catch and cardiovascular workout and know the fishing will be even better when we get a few cold snaps and the water temperature cools a bit more.

Bill has been spearfishing, fishing and surfing for all his adult life and now runs a business specialising in teaching people how to cross coastal bars and fish offshore. He also runs charters for people who fish for the right reasons and whose company Bill thinks he will enjoy. He’s been running his bar crossing business successfully since 1996 and hopes to continue doing so for years to come as he grows old disgracefully.
Previous Target Tailor, Trevally, Bream On Sunshine Coast this Weekend
Next How Far Tagged Kingfish Travel