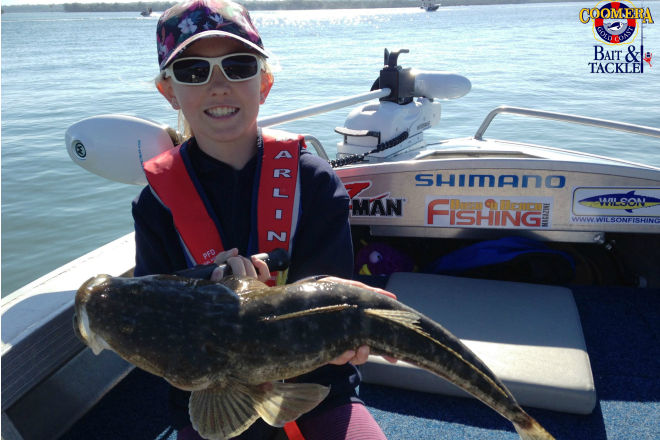 Catching flathead on the Gold Coast in September

IT’S was nice to see the rain disappear last weekend, Sunday was nice seeing lots of boats on the water and people trying their luck at land based fishing on the Gold Coast.

Light winds early in the week also gave the locals a chance to head offshore for a look on the reefs for a feed. Let’s see what’s been biting this week. I was lucky enough to hit the water on Sunday with my daughter and chase a few fish, the weather was great with light winds and plenty of sunshine for the majority of the day. We were fishing a mixture of Zerek fish traps and Zman soft plastics to target flathead and whatever bycatch took a liking to our lures. We managed to temp a couple of flathead at the entrance to Jacobs Well before heading up Tiger Millet Channel for a look. The local dolphins were active herding up schools of bait in Tiger Mullet, low tide gave us a change to throw lures at a creek mouth producing a couple more flathead. We then hit the Pin Bar Mouth and fished the ledge that runs from Swan Bay entrance towards Kalinga Bank, using the Zerek fish trap soft vibes we hooked moses perch, tailor, flathead and also a juvenile maori cod showing a good range of species that took a liking to the lures. Water quality was pretty good last Sunday but snot weed is a big issue in some areas making fishing extremely hard.

Customers that headed offshore early in the week managed a good variety of fish on the 24 & 18 fathom reefs east of the Seaway, catches included quality snapper, moses perch, tusk fish, trag jew, bonito, cobia and mac tuna. Float lining WA pilchards and squid or live baits like Yakka’s did the job well. Just check the local weather report before heading offshore. Reports of some bigger flathead in the 90cm range have been coming in this week, larger fish have been caught in the Pin Bar mouth and also in the Gold Coast Seaway mouth and channel, large soft plastics on heavy jig heads and large soft vibes have been the main method used. Some good catches of flathead have been coming from Crab Island, Brown Island, Aldershots, Jacobs Well, Tipplers Passage, Tiger Mullet Channel, Canaipa Passage, Logan River and the Coomera River. You may have to move around a bit to avoid the snot weed at the moment it is making fishing some areas hard work.

With a bit of rain on the way for the weekend it’s worth putting the crab pots in, I did see heaps of sand crabs amongst the weed beds when I was fishing last weekend and customers have been catching a good feed. A bit of rain will stir up some early season mud crabs, we have seen some nice ones caught this week, not in big numbers but some nice quality mud crabs are on offer. Try the Coomera River, Crab Island Main Channels, Tipplers Passage, The Never Fails, Tiger Mullet Channel Eastern End, Bedrooms, Jacobs Well, Canaipa Passage and the Logan River for a feed.

At the time of writing my report we will see light to moderate winds from a W/NW direction on Friday, tending Southerly on Saturday before swinging back to North on Sunday all in all the weekend is looking good wind wise apart from some rain. Not too much swell around at the moment, you should always check the weather forecast and local Bar conditions before heading offshore to fish. We have a bit more tidal flow as head towards the Full Moon early next week.

If you have any great catches to report or fishing photos please email them to brett@coomerahouseboats.com.au Good luck with the Fishing. Brett

Hi Everyone, hope you’ve all had a great week, a bit of a wind and …