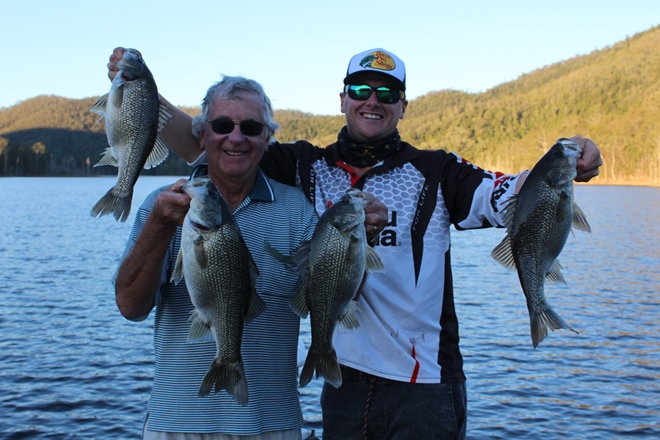 The author and Wayne with an awesome haul of bass.

I headed out to the dam a couple of times during September and on both trips my good mate Wayne Nettleton and my dad came with me. Every year, Wayne comes up from Melbourne to visit and he is an absolute mad-keen fisher. I’ve taken him out over the past few years always with one goal in mind: to get Wayne a bass over the 50cm mark. This time he was definitely in with a good chance.

For the first trip, I organised to head out to the dam midweek. I like fishing the dam on a Wednesday or Thursday because of minimal boat traffic and skiers. Dad and I picked Wayne up in Noosa and headed out to the dam. The trip out takes about an hour so Wayne had plenty of time to talk about his latest fishing trips, including a Papua New Guinea barra expedition that certainly got me pumped about barra fishing. However today we were bass fishing, so I had to remain focused.

We arrived at Borumba around 10am and planned to fish until 5pm to give us plenty of time to whack some big Borumba Dam bass. After launching, we headed across the dam to an old rock wall drop-off that seems to hold a lot of fish when the dam is sitting at around 80 percent capacity. I started by jigging Smak Ice Jigs, and wow did the fish smash these. I used the 12g Darter version in Summer Time colour. Fishing a steep drop-off where most of the fish are sitting on the bottom in 8.5-12m of water, it’s a must to keep your lure right on the bottom.

The rod and reel combo I use for this technique is an old favourite – an Abu Garcia Vanguard 7’, 3-7kg baitcaster rod matched with an Abu Garcia Revo Premier reel. I love using baitcaster combos for ice jigging because you can keep in contact with the bottom much more easily than with a conventional spin outfit. I leave the reel in free spool and manage depth with my thumb. This technique is basically a must when fishing steep rock walls.

At this first spot we caught about 10 fish. No big ones but it was good to see the fish were biting. After this, we headed up the dam to the start of the trees. This is where the fun really began. We found two locations where the fish were thick. I had recently bought a Humminbird Helix 12 sounder with Mega Imaging. This unit is 10 times better than my old Humminbird 1198 and has made fishing so much easier. I’d suggest anyone in the market for a new sounder should have a serious look at these units because they’re absolutely amazing.

Once we located the fish, it was game on. Most of the Borumba Dam bass were hugging the drop-off in 9-15m of water. The lure of choice was the old faithful Baby Bass Slider matched to a 1/2oz Berkley Dam Deep jig head. Wayne was having a ball casting these plastics. The retrieve used was pretty simple: cast out, let the lure hit the bottom and then slowly crank it back in. With the 1/2oz head, you can keep the lure right in the strike zone down the bottom where the fish are holding. For about an hour we were continuously getting hits, landing fish and sometimes being smoked.

It was an epic session where we caught about 30 bass between us.  However, we didn’t land any of those elusive 50cm-plus bass.  We came close a couple of times but the big bass got the better of us. We ended up landing over 40 bass for the day, which was a fantastic result.

This second trip was to be Wayne’s last before he had to head back to Melbourne, so we hoped the fish would play the game. We headed straight to the area where we had caught heaps of Borumba Dam bass on the last trip but a couple of boats were already there, so we decided to travel further up the Yabba arm to target the river bed drop-off. We managed to land a few fish but no big ones, and they were nowhere near as active as on the previous trip. So we changed tack and headed back down to the main basin.

The first spot we tried was a flat near the second yellow buoy. As we drove over the drop-off, the sounder showed the fish were thick under the boat, so we dropped in the electric motor and started firing casts. We were still targeting the main drop-off from 7.5-12m, hopping Evergreen 1/4oz Little Max blades. These little blades did the damage and Wayne, Dad and I were getting triple hook-ups. We would drop a fish and as soon as we’d drop it, another fish would eat the blade. This is what fishing is all about.

Wayne loved every minute of it but we still didn’t manage to catch that cracker 50cm Borumba Dam bass. There’s always next year! It was an awesome trip and we landed over 50 fish, with heaps around the 40cm mark.

Until next time, I hope you enjoyed the read.

Callum first went fishing with his dad when he was about four years old, and he’s been hooked ever since. He got into freshwater tournament fishing when he was roughly 13 years old and has competed in bass and barra tournaments since then. His biggest achievement on the competition circuit came when he was 16, becoming the youngest person to win a Bass Pro. He eventually became the number-one ranked angler in the Australian Bass Tournament Series and is also part of the Purefishing Pro Team. Callum recently obtained his coxswain’s licence and is in the process of getting his bass boat in survey. When this is done he intends on setting up a charter business, running salt and freshwater charters on the Sunshine Coast.
Previous Formosa Marine releases new options
Next 2017 North Coast Fishing Bonanza set to sizzle this week