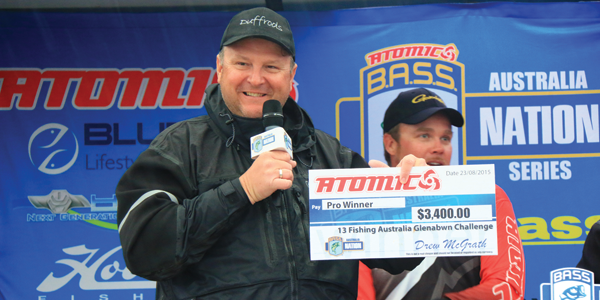 What an incredible last qualifying round we had at Lake Glenbawn, NSW. With four anglers in both divisions still chasing the Angler of the Year titles and the last of the qualification points up for grabs, the premium anglers were keen to take the win from the multitude of competitors. The ‘diamond in the rough’ Dave Welfare rose to the top after bagging a combined weight of 7.34kg. He is an animated angler who was thrilled with his victory, and those viewing the live stream definitely got a show to say the least.

Dave has been part of the tournament angling scene for many years and was one of the anglers chasing down young gun Dane Radosevic in the AOY race.  He did everything possible but Dane held onto the AOY title with a second-placed finish. After a massive pre-fish, Dave had a solid plan worked out to attack the edges and chase big bass using a combination of techniques.

Basically every fish he weighed in was caught on a 3” Ecogear Power Shad in colour 278 (Eel), matched to a 1/4oz TT Lures jig head with a size 1 or 2 hook. The smaller hooks really helped to stop the lure fouling in the weed.  Dave used a Duffrods Kustom BreamStix 7’, 1-4kg rod, which would ordinarily be considered fairly light for chasing bass, but Dave wasn’t fishing heavy structure and needed something a little more forgiving on the shallow edges. Dave uses Berkley Crystal FireLine on all his reels.

Dane Radosevic is a gun on the tournament scene and he has been consistent and managed to sit towards the top of the leader board at various rounds. Dane was extremely proud to have taken out second place for the weekend and the AOY title. Like he has all year, he used the ever-reliable Z-Man Slim SwimZ in Watermelon Red, Bloodworm and Smoke Hologram.

Dane switched it up between the three colours, depending on the time of day and available light. He threw Watermelon Red first as the sun rose before switching to Bloodworm and finally Smoke Hologram when the sun was high in the sky. He rigged these plastics on the new TT Demon Heads in 1/6oz with 1/0 hooks and used a Barrabass rod with 10lb braid and 8lb leader.

Craig Simmons has said on a number of occasions that he loves to fish, and his efforts helped him to finish in third place. He had a bit of a sketchy pre-fish but got it together once the tournament started. Using 2.5” Shadtails from O.S.P in colour w0027, which is dark green with a blue fleck through it, Craig focused his attention on both the shallow and deep areas of the lake. In the second session he weighed the Big Yella Time Big Bass Bag of 2.69kg, which pushed him up the leader board. Craig used an Edge Rods First Strike sample in 701 with 7lb Super Natural Toray leader and new 10lb Egi braid from Toray.

Matthew Langford couldn’t put a cast wrong, taking out the Co-Angler division. Matthew has been in great form this tournament season, and his skills and love of the sport saw him win his third round for the year at Glenbawn and also take out the Co-Angler of the Year title. Feeling the pressure coming into the last session, Matthew was set to lose the AOY award if all anglers remained in the same positions, but he caught a massive bag and consolidated the victory in what was a very emotional finish.

Matthew used a 7’3” XLFC Bass Control Freak rod made by Ian Miller of Millerods matched with a Shimano Stradic CI4 spin reel spooled with Stren 16lb braid and 8lb Berkley Vanish leader. He fished a mix of 1/4oz Bassman jig head-rigged Eel-coloured Ecogear Power Shads cut down to 2” and a custom-painted TT 1/6oz jig head with a Z-Man Slim SwimZ in Bloodworm. Matthew stuck to those two lures all weekend.

Mark Bleys had a grin from ear to ear after finishing in second place for the weekend. Mark was new to the tournament scene this year and it is clear he enjoys every bit of his time on the water. He caught all his bass on a 1.5” Slider in Caterpillar rigged on a 1/4oz Berkley Dam Deep jig head or a Z-Man Slim SwimZ in Watermelon Red on the same jig. Mark used a Pflueger Patriarch XTR 2-5kg, 6’8” rod matched to a Daiwa Exceler with 6lb Berkley FireLine Tournament Exceed and 6lb FC Rock leader.

John Noble is going to be an angler to watch because he has fished very consistently this tournament season and is stepping up to the Pro division next year. His confidence continues to grow after landing third place at Lake Glenbawn. John’s confidence lure was a cut-down Avocado-coloured Slider Grub on a dark green 1/6oz Berkley Dam Deep jig head. His rod was a Barrabass XP902 matched with a 2000-size reel spooled with Berkley 4lb FireLine and 15’ of 6lb Berkley Vanish leader.

The Stormr Big Bass was caught by Cameron Ley, and he was stoked to see the scales flash 1.69kg after his bass hit a 3” Keitech Easy Shiner in Gold Flash.

The Lake Somerset tournament is set to be the largest of its kind for the year, with XOS bass ready and willing to play the game at this time of year. We expect to see massive and possibly world record bass hitting the scales during this event, so stay tuned for those results in the next edition.

For upcoming tournament information and results visit www.bassaustralia.com.au or go to the BASS Australia Facebook page.