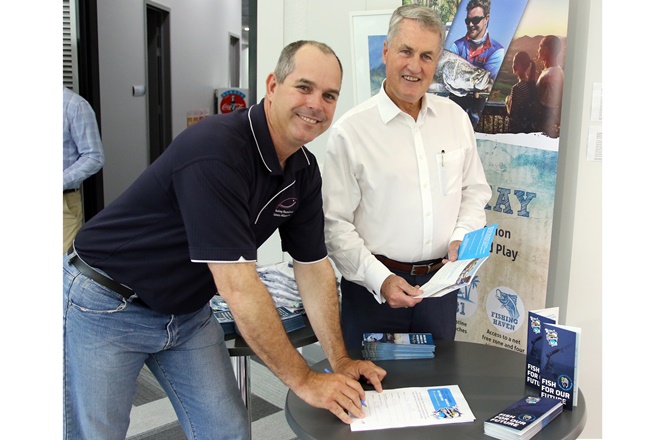 MACKAY recreational fishers are kicking off the barramundi open season with a pledge to protect their Net Free Zone.

Spearheaded by the Mackay Recreational Fishers Alliance, the pledge centres around a voluntary code of conduct for anglers. MRFA president John Bennett said Mackay anglers knew how lucky they were to have one of the three new zones in Queensland where commercial gill netting was prohibited.

“We certainly don’t take it for granted,” Mr Bennett said. “We fought very hard for the Cape Hillsborough to St Helens NFZ and, since its implementation, fishing in the area has improved significantly. Our aim is to make sure that, as word gets out about the amazing fishing to be had in the Mackay area, the recreational impact on the fishery remains minimal. After all, it’s about looking after our backyard.”

With this in mind, the first value of the voluntary code of conduct asks anglers to limit their take of barramundi and threadfin salmon to three of each species per trip. It also calls for barra and king salmon over 100cm to be released, as fish of this size are breeding females that contribute greatly to future fish stocks. Mayor Greg Williamson congratulated MRFA on the initiative and applauded the four key values of the code of conduct.

“I think it’s tremendous to see local fishers voluntarily declaring, ‘you know what, three barra is enough – let’s let the rest go, we’ve got a good feed already’,” Cr Williamson said. “These anglers want to go out and have a fantastic time and catch a feed, but they also want their kids, and their grandkids, to be able to do the same thing – it’s brilliant.”

Randall Owens from the Great Barrier Reef Marine Park Authority said it was great to see the code promoting sustainable harvest behaviours up front, as well as looking after the environment to support fish stocks into the future.

“The four values are great – they help generate voluntary compliance and promote proper catch care,” Mr Owens said. “Education is a huge part of sustainable catch-and-release fishing – if you don’t support a large fish properly and then drop it on a hot boat deck for a photo before release, the chances of that fish surviving drastically reduce,” he said.

Cr Williamson said the Net Free Zone had been an economic boon for the region. “Council and Mackay Tourism have been actively promoting our tremendous fishing and natural assets to the world,” he said. “We’ve recently launched a new website and Facebook page called Hooked on Mackay to help get the word out about the great angling opportunities we have in our region.”

The Mayor encouraged fishers to check out hookedonmackay.com and said anglers were able to register their support for the code via the website. When anglers register to take the pledge, they will receive a boat sticker, stubby cooler and go in the draw for some exciting prizes. Signage will also be installed at select boat ramps in the NFZ over the coming month.

Mr Bennett encouraged visiting anglers to do their bit for Mackay’s fish stocks by taking the pledge and proudly displaying the sticker. He said it was a fantastic way for out-of-town anglers to throw their support behind the fishery they were visiting. The voluntary code has been developed through a collaborative community partnership and does not replace Queensland Fisheries’ regulations.