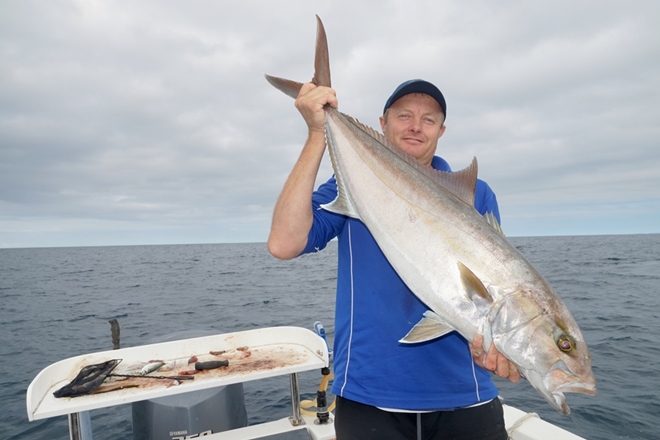 Tony Kickert worked hard for this live bait-caught amberjack that was photographed and released to fight another day.

Adapting to factors that affect your fishing offshore

THE fishing on the reefs offshore from Brisbane has been superb on occasions, with plenty of light wind days allowing access to shallow and deeper reefs, with some cracking fish caught too.

Not bad for a location that has something like 2.2 million people on its doorstep. I am a great believer in rolling together a range of factors that determine fishing choices on any given day. Things like moon phase play a big part in determining where I fish and which species I target when fishing offshore. The state of the tide has a big effect, and I also run with several other self-developed rules of thumb about barometer, when some places fish better and what is likely to be on the menu. That isn’t to say I never have an off day. We all do at times, regardless of how much effort we put in, and that is why our pastime is called fishing, not catching.

Conversely, at certain times of the year some places fish well regardless of moon phase, but with experience comes knowledge and options that can turn slow days into something a lot better. Recently I was contacted by an interstate visitor who wanted me to pick up himself, his mates and family members from a cruise liner anchored at Tangalooma overnight so they could enjoy a day’s fishing offshore while in our region. After discussing logistics and their expectations for the day, I was looking forward to delivering a fun day that would be different to the run-of-the-mill offshore fishing trip.

After a simple pick-up off the beach when the first tenders went ashore, we were off up around Moreton Island to a live bait ground to the east. The livies were not co-operating, which was a bugger, so we tried another spot and found nothing happening, with big snapper and lippers not co-operating either. I decided we’d run seaward and focus on baits, micro jigs and deep jigs. Micros were very slow but the bonito they hooked were going to be awesome baits for somewhere I had in mind for later in the day.

We then moved out a little deeper to work over a few other lines of reef and it was a bit slow, but with some snapper and other keepers in the box, things were looking better. With the emphasis not on what was in the box, because the cruise ship would not allow them to return with fish they had caught, the challenge was to give the crew not only an enjoyable day but to get them doing something out of the ordinary or catching something they wouldn’t at home.

Well, turns out they hadn’t done any deepwater jigging when fishing offshore and were keen to give it a go. So, off we went to some craggy pinnacle country that just happened to be loaded with bait to see what was lurking in the area. The young fella on the crew was a bit of a footy whiz and fit as, so after a bit of a tutorial he got the rhythm going and worked up a few solid kingies. His peers were not as fit it turns out and soon wore out while on the jigs, but did manage some decent fish on baits.

These guys said they didn’t get pearl perch down south and I really wanted them to see how big they can grow up here. So it was off to a quiet little rise in deeper water where I found plenty of the tell-tale light-blue dots and streaks hugging the seabed on the sounder screen. That’s them for sure, I thought, and dropping hooks loaded with bonito fillet into the thickest patches worked a treat. It was the right part of the day in terms of tide, moon and location and it was a good session, with some nice fish also released because they have good survivability.

The crew had worked pretty hard all day and their reward at the end was to sit on the anchor off Yellow Patch on a totally glassy sea in a lovely warm environment (unlike anywhere down south in winter) and enjoy several local beers I happened to find in the fridge while I cooked them up a feast of fresh pearl perch fillets. It wasn’t hard to impress because those pearlies are so moist and literally fall apart in your mouth when they are that fresh. We all had a good chuckle enjoying the northern sights of Moreton Island in the warm late-afternoon sun wondering if the rest of the cruise ship passengers had had a day anywhere near as good as this crew’s.

As we get on in the year, the increasing water temp (it was 21.9C at the time of writing) will see a reduction in snapper numbers for anglers fishing offshore as the species spreads more widely. Pearl perch have been biting particularly well lately and will continue to go really well until later in the year. Coinciding with all this has been an increase in the number of amberjack and teraglin on the reefs and I’ve had a few bookings lately to specifically target them.

The smaller teraglin south of Point Lookout have been very active and I have noticed more of the bigger teraglin north along Moreton appearing in our catches. The midrange lines of reef fished well for amberjack over the last new moon period and live baiting for them has been a lot of fun in anywhere between 55m and 75m of water.

Being prepared by deliberately pre-setting drags to the right level, upgrading to heavier leader to absorb the impact and ensuring the rig has no nicks and abrasions will count for heaps with these fish. You will see a lot more of them in coming months and they go hard when hooked up. The bag limit of two amberjack and two kingies per person is about the right level and helps ensure plenty are around for the future as they can be over-fished.

Countering this, the increasing water temperatures see numbers of dolphinfish moving in from warmer waters and they provide plenty of fun and sport for everyone who hooks up on them. The wave buoy off Point Lookout is a very popular place for them when fishing offshore and we can only hope no tragedies occur there this summer. The numbers of spearos in the water holding onto the buoy that is clearly signed ‘keep clear’ waiting to ambush a big dollie and the number of people moving around in boats casting live baits increases annually.

It is a potentially deadly combination where common sense is required. 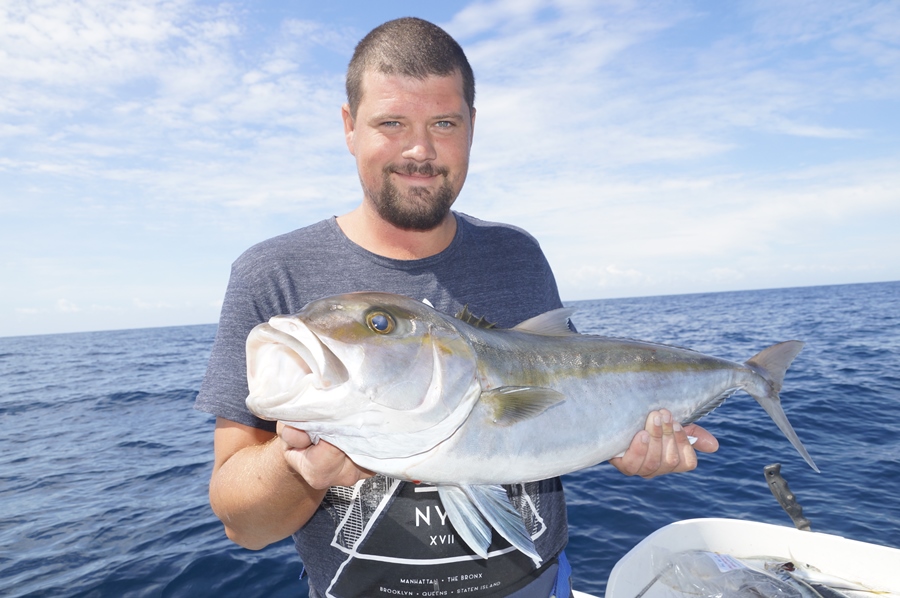 Bill has been spearfishing, fishing and surfing for all his adult life and now runs a business specialising in teaching people how to cross coastal bars and fish offshore. He also runs charters for people who fish for the right reasons and whose company Bill thinks he will enjoy. He’s been running his bar crossing business successfully since 1996 and hopes to continue doing so for years to come as he grows old disgracefully.
Previous NSW Gone Fishing Day is on again
Next Anglers had a few offshore windows over the long weekend